NIRScout performs dual-wavelength continuous-wave (CW) near-infrared (NIR) diffuse tomographic measurements on large tissue structures at high (= several Hz) sampling rates. The system facilitates NIR illumination of multiple target locations in a time-multiplexed, scanning fashion. The NIRScout instrument is operated through a graphic user interface (GUI) on a personal computer (PC), to which it is connected by a USB 2.0.

Halo Sport is a brain stimulator that increases neuroplasticity. The headset works by applying a small electric current to the part of the brain that controls movement, activating neurons so they fire more often when you train. 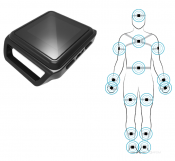 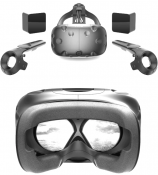 The HTC Vive is a virtual reality headset developed by HTC and Vale Corporation. The headset uses “room scale” tracking technology, allowing the user to move in 3D space and use motion-tracked handheld controllers to interact with the environment.