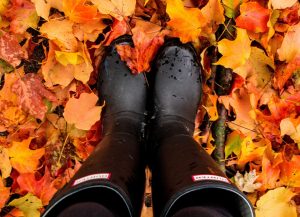 Before coming from the Midwest to the School of the Museum of Fine Arts at Tufts for my Studio Art Post-Baccalaureate and M.F.A. programs, the only things I knew about Boston were from the films “Good Will Hunting” and “Last Stop Wonderland.” Both films I will point out offer a general and off-putting view of the MBTA (T) system. I also had associated the word tuft with the Dr. Seuss book “The Lorax” and “the bright colored tufts of the Truffula Tree.” A delightful but cautionary tale, which is actually available online by searching “Tufts Lorax.”

It’s funny how even moving states and regions within one country can feel like a complete divide. Through the graduate community of SMFA at Tufts and ASE, I have embraced these Boston and New England differences, which helped me get through the culture shock and feel at home in this vibrant, creative, and significant community.

Here is my Boston and New England glossary of specific themes or cheat sheet, if you will, of days to know, and even how to order coffee in this north east community.

I was confused my first winter when I saw people wearing rain jackets, instead of big puffy jackets. However, the amount of coastal influence on the weather affects the amount of water that is produced within the greater Boston area. Although the city can get quite cold and experience a heavy amount of snow it is entirely realistic to need both a rain jacket and winter coat. This New England town, has a very distinctive look come mid fall and into winter. The hearty brands seen through the streets are functional for the ever-changing weather and are also New England wardrobe staples. Umbrellas are useful; however, I have gone through at least seven since living in Boston. The wind is so strong that they can be swept upside down and rendered useless in mere minutes. You’ll never go wrong with a heavy rain jacket.

“The wicked awesome time she tried to park the car in the yard.”

I will never fully understand the Boston accent. Or why certain places don’t sound at all how they look (see Town Names). The accent is highly tied to living in various areas of the city, and socioeconomic factors. The accents are not as thick as they sound in the movies and on TV. But there is a sense of historic use within words tied to specific functionality and form. When I first moved to Boston, I thought people were trying to fake me out by using words that didn’t make any sense in the context they were giving them. There is a whole New England/Boston vocabulary. The terms bubbler, frappe, rotary, are only a few of the words that may be heard, mispronounced and misunderstood.

Town names throughout new England region are mixed with Native Algonquian words and phrases and old English names. After four years I still get quite a few of them wrong, and just point on the map. Luckily, people here are helpful enough to enjoy the mistake, laugh with you, and then educate you on the correct pronunciation

Seasonal, traditional, international, and experimental cuisines are all part of Boston’s rich cultural experience . There are several amazing breweries and food experiences in the greater Boston area to try these dishes throughout the year.

American Horror Story: September 1st in Boston – how to find an apartment and knowing your borough

September 1st is the turn over day for 2/3 of Boston’s apartment leases and has become known as Moving Day. This day is also known as Allston Christmas, a nickname for the tradition in which some people dump furniture and other household items on the curb while moving, which are subsequently scooped up to be reused by neighbors. However, moving into Boston, it is possible to find places to live that have different rental periods beyond September 1st or that will allow you to sublet the last couple of months before September so that you are not stuck in the crunch of college move-in day.

As the oldest major league baseball stadium in the country, Fenway Park serves as a symbolic home of New England and Boston pride. You may not be a Boston sports fan upon moving here, but if you stay long enough the chances are that you will be eventually. I have never seen a community come together in such a caring and sincere way to show such support for a group ideal like it does for its athletes and teams. People in Boston area show the kind of reverence that many would for a religious figure or beloved family member. It’s hard not to get wrapped up in that kind of infectious behavior.

There is a common misconception that the people of the greater Boston area may be unfriendly or unwilling to help newcomers. This is something I have found to be wholly untrue by and large. It has been my experience that often those who meet you with a cold and hard exterior at first are the same that will make sure that you have whatever you need. They may make fun of the situation but are more than willing to help. Whether it be directions, recommendations, or a conversation. New Englanders don’t like to waste time and get to the point, but they will engage for it all.

Lastly, finding time to stop and smell the Dunkin

Dunkin Donuts is a Boston area staple. In almost every area, you are bound to run into one every once and a while. Like Boston itself, there is a unique order and specific language to ordering from this shop.

How to order a coffee

A “regular coffee” comes with cream and sugar (3 cream, 3 sugar). If you want a black coffee, you need to ask for a black coffee.

You can specify your order by having cream or milk added in 1,2,3, amounts and the same with sugar.

If you ask for a flavor—it’s without sugar added.

Any flavor swirl has a healthy dose of flavored sugary syrup added.

If you get an Iced coffee

Boston area residents have been frequently known to ask for a Styrofoam cup with iced coffee. I thought this was strange, however it makes sense. It keeps the cup cool in the spring/summer and your hands warm-er in the winter. Bostonians are not afraid to drink ice cold drinks throughout the winter! 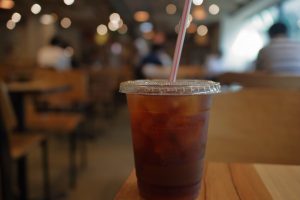 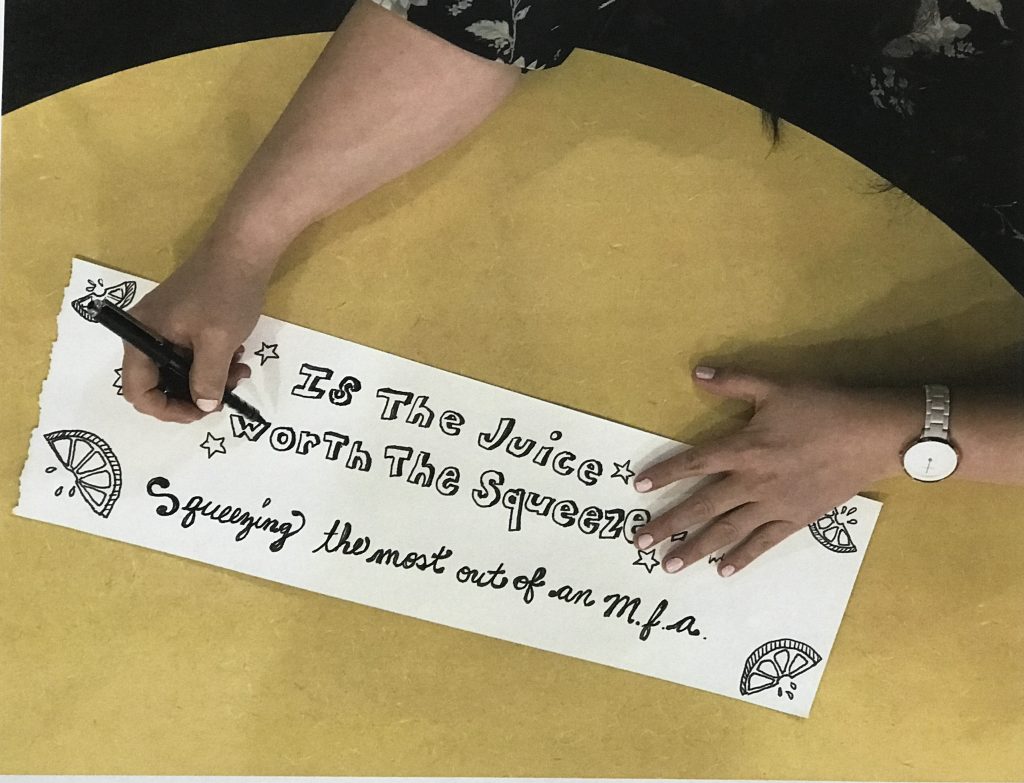 When I was considering graduate and post-baccalaureate programs, I was worried about the cost, location, and resources of the school. Would I feel comfortable enough to do my best work and make the time worth the cost? From having sat in the back of my mother’s college classrooms at the age of five, I have learned the “tells” of any good educational institution. There are common traits to look for in a school where students can succeed and you can tell this by the people you meet. It is the alliance of support that makes a place special, something beyond great studios and shops.

While on my first tour at SMFA, I met five people. Their support and inspiration were why I decided to build my community here.

Keena (Former Grad Student): The first person I interacted with was then a current graduate student named Keena. Not only was she friendly and welcoming, but open about the program. She encouraged me to ask any questions that I may have. I learned about the ins and outs of the program, the best kept secrets, and things to look for in the building and studios. She informed me of places and resources that she appreciated that could also be beneficial to me. I was able to see first-hand what she was gaining from the program and learn how she would use this experience when she left. Keena shared a vision of who I could be and urged me to make myself at home in the potential of my own space here. After our conversation, I could see myself sitting in her place, happily working on producing my best work and developing a strong sense of self.

Nan Freeman (Director, Post-Bacc Program): After the tour, I had lunch with a group of prospective graduate students and the director of the post-bacc program, Nan Freeman. She asked us what had led us to SMFA at Tufts and to share what our backgrounds were. Being able to share our backgrounds and learning that this would be a resource in our art making was vital. I felt able to express a variety of passions and use my individual skillset as an asset in my practice, encouraging my research, and pushing my vision. I knew from this conversation, that a structure of interdisciplinary experimentation was built into the SMFA at Tufts model.

Peter Scott (Professor of the Practice, Printmaking): The next person I interacted with was Peter Scott. From my first conversation with him, I knew that he was going to be my favorite faculty members at SMFA at Tufts (shhh, do not tell that to all of my other favorite SMFA faculty). Peter, a practicing and ridiculously talented artist in the field of printmaking, talked “shop” with me about facilities and working with print media at the school. He is whip-smart with a conceptual understanding and a sense of humor. He made me feel at home and that this was the place I wanted to be. Luckily for me, I would find that same amazing dynamic with so many of the faculty I have come to admire.

After a half a day engaging with faculty members, current students, going on tours, and listening to a panel, I walked around the school trying to decide if I would be comfortable at the SMFA. I wandered into the library where I was greeted by Ashley Peterson and Darin Murphy, the Research and Instruction Librarian and the Head of the Fine Arts Library respectively. The three of us sat and talked for over 45 minutes about art, research, and resources that the library could provide. They pulled out artists’ books and references for me to view and told me about individual research visits. The SMFA library is small but mighty and they let me know that it is part of a consortium which provides students with access to books from around the world in addition to the SMFA and Tisch libraries’ collections. I remember thinking how lucky I was to be in a place where people were so passionate about their subjects and eager to help others find their own.

Leaving the library, I knew that the SMFA at Tufts would be the right choice for me. I looked forward to continuing conversations with the faculty, staff, and students on a regular basis. Meeting these five people helped me to take a leap of faith, knowing that I would have the resources and support to develop myself as an artist.

No matter what happened, the juice would be worth the squeeze!