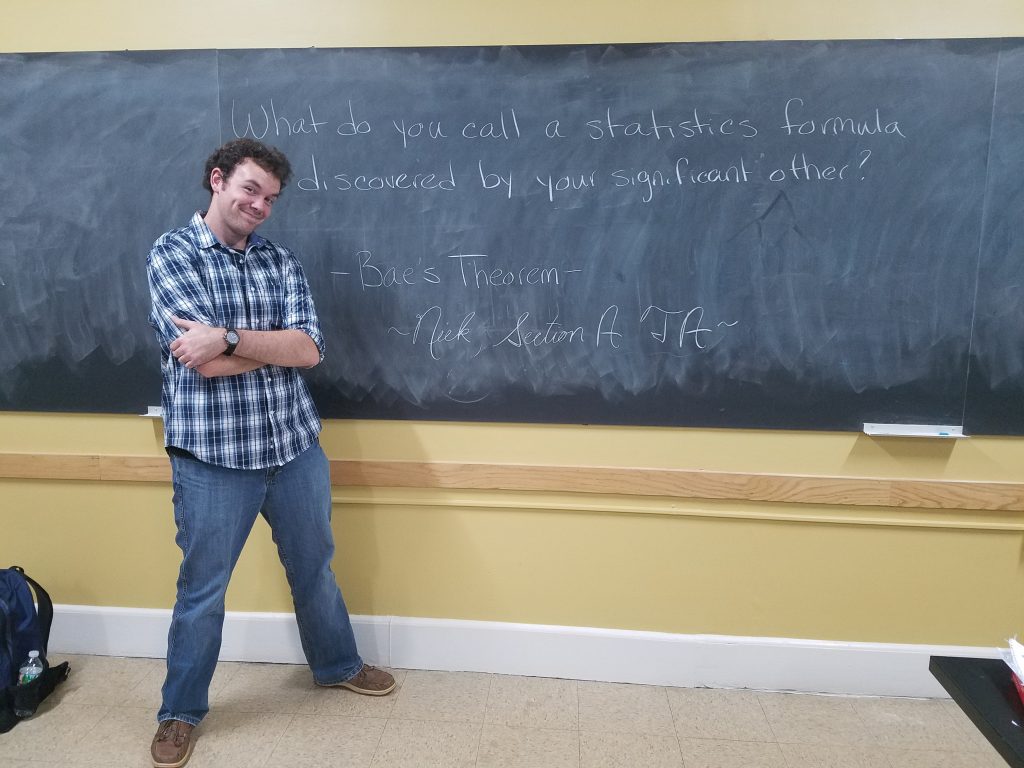 I’ve been a TA now for a little more than a year, which means that I have wisdom to share (not really, but I’ll try). Being a teaching assistant has been exhausting, rewarding, and, much to my surprise, quite enjoyable. Now, this might be a little disorganized, but I’ll try to make it as educational as possible. I’ll skip the basics: you know the absolute no-no’s! I’m going to go straight to the stuff that I think is making me a better TA than I was before.

When I started out last year, I was absolutely terrified. I remembered every tiny bit of advice that I’d been given, including ‘never apologize’, ‘don’t let them know you’re afraid’, ‘never give out your cell phone number’, and loads more, but honestly, all that stuff just scared me more. My first recitation didn’t go well. Nor did the second. In fact, I don’t remember feeling like I’d done justice to a single recitation session the entire semester.

Which brings me to my first don’t. Don’t make the recitation about yourself. It’s very easy to do that because you’re in front of a classroom, and you have performance anxiety, and you feel continuously judged. But it isn’t about how you do. Your job is to get through the material that you’ve been told to cover, because the students in your recitation need help with it. They’re struggling with concepts that you, the grad student, already know, and you can help them! It’s all about them. While it may seem pretty basic, making my recitations about the students and what they needed, instead of focusing on how I was doing, improved my performance in recitations a great deal.

However, all the best intentions in the world aren’t going to help you if you aren’t familiar with the material. This is especially true for concepts that you’ve known for a very long time. For me, as an economics grad student, that includes things related to probability, random variables and other statistical matters that I’ve been working with now for about five years. (Yes, five years.) And the problem with being over-familiar with concepts is that they seem simple to you, and you don’t simplify them enough when explaining them. You skip steps because in your mind, they’re obvious. The way out is simple. Prepare for recitations! Especially if it’s stuff you know. Sometimes I practice my spiel for lab sessions on my classmates. Occasionally I’ve practiced over Skype on my long-suffering boyfriend.

There are two other very good reasons for preparing for recitations. One is that it makes you feel less nervous. The other is that you can focus less on the material and more on how students are responding to it. You become more aware when they understand something you just said, and when it wasn’t clear enough. Making eye contact also helps. For someone like me, that can be a challenge, but it’s extremely useful.

Try and make things interactive. This year, for example, when I’m doing practice problems with my recitation section, I’ve had them make little groups. I give them a few minutes to work on it, and then we go through it together. Students feel more comfortable sharing their work when they’re not alone. They get nervous too!

Last pieces of advice. Don’t sweat the grading. Put some music on, be as consistent as you can, and don’t think too much about it. Set boundaries. Don’t set a precedent for always responding to emails in half an hour, or having extra meetings for students who can’t make it to office hours. I try to be as accommodating as I can, but it’s important to get the message across that you have a lot on your plate too. A lot. Don’t look at other TAs and think, I wish I could do such a good job. Be yourself, and you’re going to find a teaching style that makes you absolutely awesome. Finally, ask for help whenever you’re unsure. The professor you work with will be happy to clear up any doubts you have.

Anyway, remember those horrible recitations I was having last fall? When I got back to school for the Spring semester, I found a card in my mailbox from one of my students, thanking me and telling me that they really appreciated what I’d done in recitations. Guess I wasn’t such a bad TA after all.