Our next BMES research post highlights the work of senior Jaclyn Foisy! Read about some of the super interesting work that she has been involved in at Tufts and get a sense for how other BME students are pursuing their goals in the lab. Some pretty awesome stuff!
From Jaclyn:
For the majority of my time at Tufts, I have done research in the lab of Professor Kuo, who focused on Tissue Engineering/Regenerative Medicine. I worked for 2 years with Ava Sanayei and several graduate students and post-docs who were aiming to gain a better understanding of how embryonic tendon cells have scarless healing abilities. We started by characterizing physical differences between embryonic and postnatal (representing the adult phenotype that heal with significant scarring and decreased functionality) tendon cells. Differences included proliferation rate, gene transcription, and protein production, focusing on genes and proteins that have been implicated in being involved in the healing process. Following this, we worked on developing a mechanical bioreactor that would be able to apply a static load to embryonic tendons so that the mechanical properties of these tiny tendons could be determined. The device was designed in Solidworks and assembled using 3D printed acrylic pieces along with stainless steel screws. Finally, we needed a method to analyze the accuracy of the device (was it actually putting the amount of strain on the tendon that we told it to?). To accomplish this, we developed a Matlab program that could analyze a video of a tendon being stretched by the bioreactor and optically determine the strain being applied to the tendon at any point in time.
For my senior design project, I joined a team in Professor Kaplan’s lab that is working to better characterize the progression of cyst formation in Polycystic Kidney Disease (PKD). Specifically, I am investigating the role of Ift88, a protein related to the cilia production, by using a transgenic cell line that has an inducible knockdown of Ift88. This project has included culturing the cells, knocking down the protein in half the samples, and then using fluorescence staining, H&E staining, and immunohistochemistry to compare the samples that lost the protein to the controls that did not undergo the knockdown. Preliminary results are showing that the samples that were knocked down form significantly different cystic structures than the controls.

EWeek was a great time last week with both the BMES Trivia night and Internship panel! Thanks to all those who were able to stop by and hope everyone enjoyed the events and had the opportunity to learn something new! 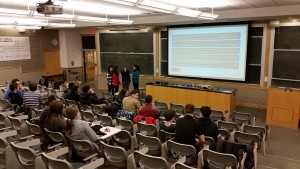