The Community Assessment of Freeway Exposure and Health Study (CAFEH) is a community-based participatory research project that has full participation of the community partners in all aspects of the science including: developing the proposal, leading the study, collecting, analyzing and interpreting the data. Our plan to work in three neighborhoods in succession, each for one year.  CAFEH began studying pollution in Boston communities near major highways in 2008.  Data collection in all study areas including Somerville, Dorchester, South Boston, and Chinatown has been completed as of 2012. Much of the major analyses have been conducted, and more results will continue to be published.

Our aim is to assess the association between exposure to air pollutants emanating from highway traffic and cardiac health in communities near highways. We are collecting and comparing measurements of highway-generated air pollution including ultrafine particulates (UFP) less than a millionth of a meter in diameter, with measures of health including blood pressure and C-reactive protein (CRP), a measure of systemic inflammation in adults. We are measuring changes in air pollution levels and health impacts as a function of distance from highways in six communities in greater Boston. 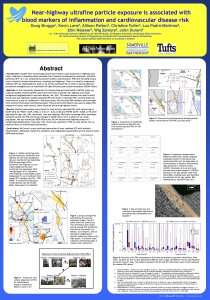 Several greater Boston communities are located near major highways.  Residents of these communities may be exposed to high levels of car and truck exhaust.  This exhaust contains invisible, odorless particles and gasses such as carbon monoxide.  Studies have shown that living near highways is linked to higher rates of heart disease, asthma, and lung cancer.  People living near highways who breathe in this pollution may suffer illness and premature death as a result. Even blocks away from highways, pollution may still cause health problems. Residents of these communities have the right to environmental justice and air-quality protection.

Another aim of our study has been to investigate the community and cultural understanding of the effects of air pollution on health among people living in neighborhoods adjacent to major highways. Building on this work, we will develop and field test culturally appropriate, educational modules that will raise awareness of risks and countermeasures.