CRISPR-utilizing organisms can also capture new DNA from invading species and incorporate it into an existing CRISPR array. This ability to incorporate new DNA allows organisms to defend against future infections that harbor the newly incorporated sequence, but also requires that the Cas9 protein be adaptable to countless target DNA sequences. Researchers have harnessed this adaptability of the CRISPR system to create a programable nuclease that can cut a DNA sequences with unparalleled specificity and efficiency.

Additionally, Cas9 has demonstrated considerable versatility. It can efficiently and specifically cut, nick, and bind genomic sequences in prokaryotes, eukaryotes, mammals, and even in human cells and embryos. This versatility has paved the way for a plethora of new advances in genomic engineering and expression control. This website will explore the underlying biochemistry of CRISPR/Cas9, and attempt to explain what, biochemically, makes Cas9 so good at what it does. In short: 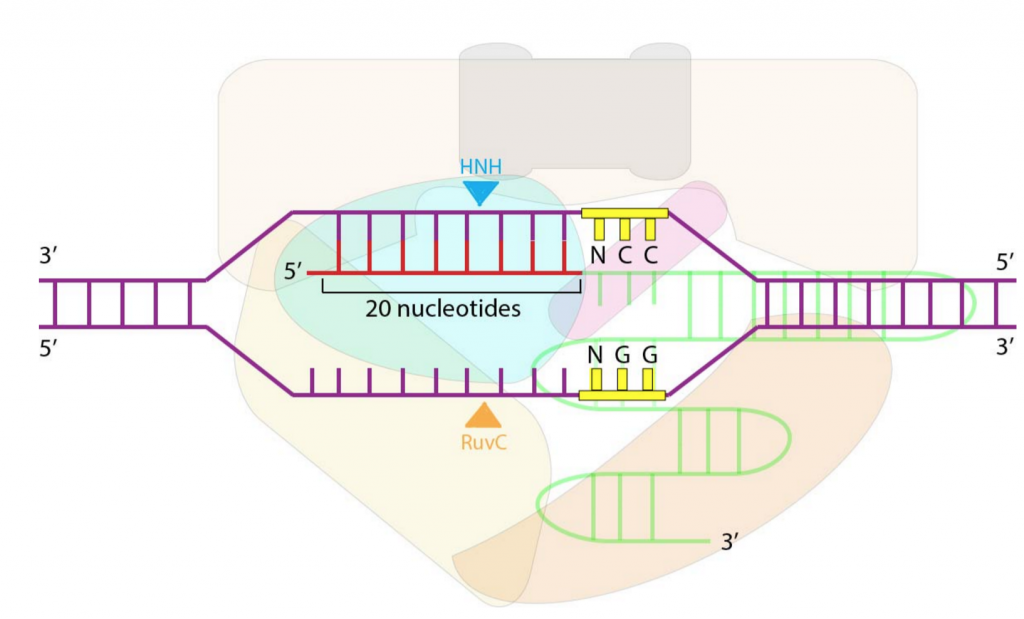 Figure: Cartoon Diagram of  Cas9 using its 2 nuclease domains to cleave a target DNA molecule at a site specified by the protospacer adjacent motif (NGG) and the 20 nucleotide guide RNA. (original figure)

Moreover, the Cas9 complex targets DNA efficiently through its DNA binding mechanism.  Because one nuclease domain can be inactivated without affecting the other, the Cas9 complex can be converted into a nickase. Alternatively, inactivation of both nuclease domains produces a highly specific DNA-binding complex.  These different modes of recognition and gene inactivation make CRISPR/Cas9 an exciting opportunity for targeted genome editing.

217 Responses to The Answer