March’s Notes from the North article is written by guest writer Spencer Scott, a current member of the Liaw Lab at MMCRI and recent transplant to the field of molecular medicine. He worked for seven years in New York as a producer for NPR, CNN, and ABC and is now a pre-med post-baccalaureate studying Biochemistry at the University of Southern Maine. Spencer will be applying to M.D. programs this spring. 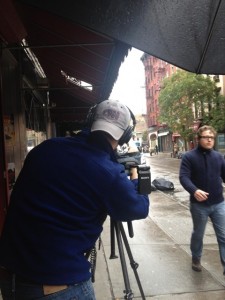 Tom McCarthey’s brilliant film Spotlight took best picture at the Oscars this year. In an age when news has become synonymous with 24-hour cable networks plastered with pundits and steadily declining newspaper readerships, Spotlight is an important homage to the important role of real journalism in American society. For over seven years I worked as an aspiring producer for outlets including NPR, CNN, and ABC. While I would never dream of comparing my young career to the work of the incredible reporters at the Globe’s investigative unit, there is still a common aspiration amongst all those who enter the field. As their name, “Spotlight,” implies, we wish to shine light where there once was darkness, to illuminate the unknown for the betterment of our society.

A little more than a year ago, I left the craft to which I had thought I would devote my life. I spent the final four months of my career in television news shooting a medical documentary series for ABC in three of Boston’s Level I trauma centers. It was there in those halls that I finally decided to follow in the foot steps of my mother, father, and brother, and pursue medicine. I left my work in television and returned to my home state to begin a post-baccalaureate pre-medical program at University of Southern Maine, which I will finish in May.

It may seem odd that the child of an orthopedic surgeon and emergency room physician grew up shying, if not flat out running, away from the sciences. I still struggle to answer that for myself. But the only answer I can give is that I didn’t think my mind was wired in that way. I loved history and language and stories, and when I thought I could help people by telling their stories, I believed I’d found my calling. I sold my first story to NPR when I was seventeen, an interview with an Iraq war veteran, only three years older than I was. He had nearly lost his life in an IED explosion in Fallujah, the shrapnel of which had torn through his throat, rendering his voice a quiet rasp. Because of my reporting, millions of “All Things Considered” listeners heard Cpl. Chris Kotch tell his story. It was a feeling that inspired the pursuits of the next decade of my life.

In fact, after all of my years working in the field, I’m still proudest of the reporting I did when I was just a kid in high school. None of the stories I told in my professional career carried the weight that my earliest, self-directed work did. Working for big networks, the feeling that you had helped someone share something vital, that you had illuminated what was once shrouded in darkness, became rare, especially for a young producer. But in Boston, as I watched the doctors in my camera’s viewfinder treating their patients I saw something so exhilarating. It may sound cliché, or like a line from “We Are the World,” but I saw people helping people, through my lens and live before my eyes. I do not mean to discount the importance of journalism, I believe steadfastly in the critical role it plays in our society. But for me, witnessing those human connections made walking away from the field easy. I knew my place lay on the other side of the lens where the help was delivered every day directly and in real time.

Back in Maine, I threw myself headlong into my studies. When I walked into my first class at USM (BIO 105 Cell & Molecular Biology) I didn’t yet know if I had a mind for science, but I was willing to do whatever it took. Fortunately, I soon learned that in academia, you can do whatever you set your mind to, as long as you are willing to put in the work and the passion is genuine. Finding science has been the most fulfilling and gratifying experience of my life and I have been rewarded for the work I’ve put into it. When I started my program a little over a year ago, I never could have dreamed that I would be interning at a place like Maine Medical Center Research Institute, involved in the incredible work its investigators perform every day. In one sense, my work at the Institute is the farthest I have yet strayed from the newsroom. Whether it is furiously scribbling down names of promoters or genes or antibodies to google, or looking at slides of fluoresced cells and western blots, every Monday lab meeting reminds me that I am not in Kansas anymore. But in another sense, the work of the researchers at MMCRI is akin to that original creed of the aspirant journalist. Science and research, like journalism, work to shed light where there once was darkness. Both disciplines endeavor to peer into the unknown and learn what lies within. Whether it be learning the struggle of an American veteran who can no longer sleep through the night, or learning the process by which the notch signaling pathway impacts the function of endothelial cells in vasculature, science and journalism share the understanding that we are all better off for knowing.