In the April issue of the Sackler Insight, we published an editorial discussing the career development resources available for Sackler students, their effectiveness and how they could be better suited to the dynamic landscape of a post-PhD worklife. As a follow-up, the Graduate Student Council (GSC), in collaboration with the Dean’s office, developed a survey to hear from students about their needs. This editorial will focus on the outcomes and suggest recommendations to be implemented by the GSC and the Dean’s office.

The survey was conducted over a period of 2 weeks, and around 1/3rd of all Sackler students responded, with representation from all class years and programs. Majority of the respondents had either prior research experience in an academic setting or had come straight from their undergraduate institutions, as shown in the pie chart below. While career development opportunities were of varying degrees of priority among the respondents at their time of graduate school interviews, almost all respondents, regardless of class year, considered these opportunities as a high priority at the time of the survey. 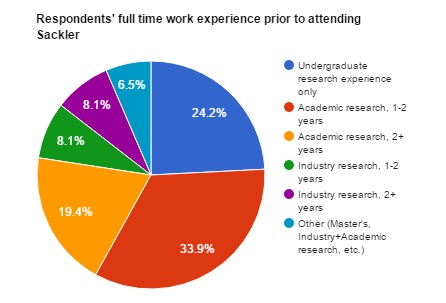 The survey also asked the students to indicate how many career development events at Sackler they had participated in over the last 2 years and to rate their usefulness. This data has been summarized in the bar graphs below. The same was asked for any career development opportunities outside Sackler the students had participated in. The students were also asked to indicate reasons they were unable to attend the events at Sackler and what kind of events they would like to see more. Lastly, an open-ended question was posed to gather additional comments from respondents. After analyzing the data, we identified 3 premises that were prevalent among the responses. 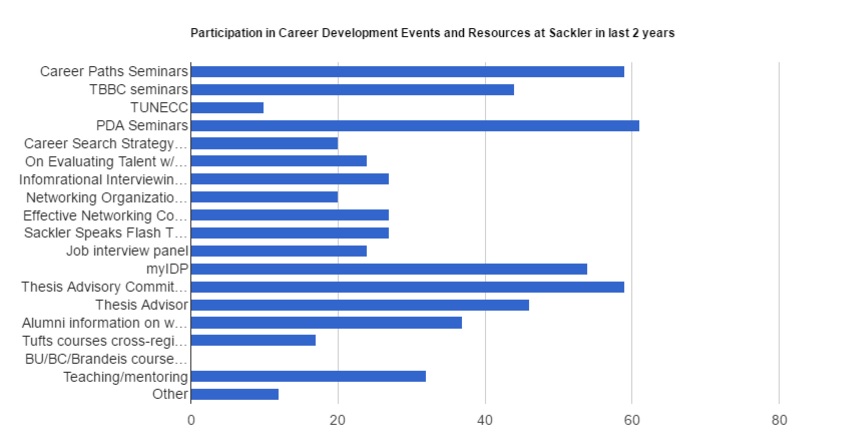 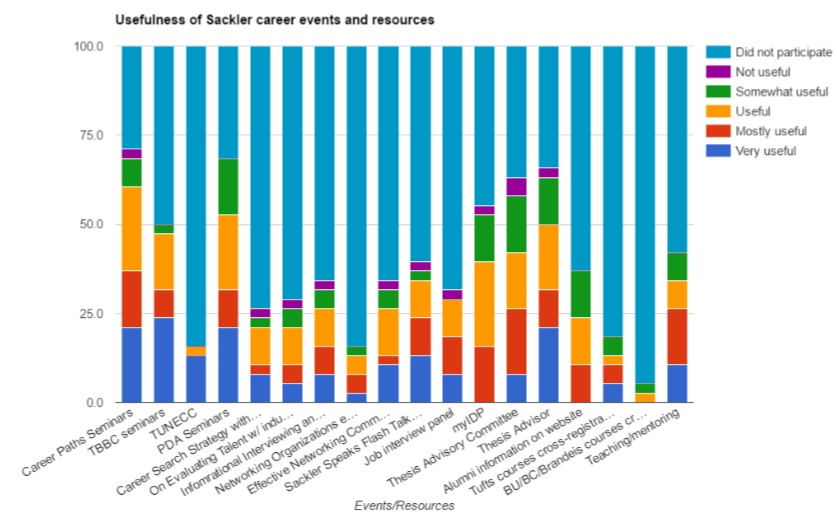 Majority of respondents to the survey advocated for more networking opportunities and information regarding alumni’s current jobs. The comments section also focused on the disconnect between alumni and the current students. While there are no Sackler specific alumni databases, as is true for other Tufts schools, it should be noted that Tufts does maintain a database of all alumni through the Advancement office. Individual schools can request alumni information through the advancement office and vice versa. There is already an existing network of Tufts alumni called Tufts Online Community (OLC) that allows Tufts alumni and students to establish and maintain connections. More info on the OLC and how to register for it can be found here – http://tuftsalumni.org/who-we-are/faqs/#community-what-is. Additionally, the Dean’s office, who keeps track of the Sackler alumni through social media services such as LinkedIn for training grant application purposes, also update the alumni information on the Sackler website (can be found here – http://sackler.tufts.edu/Student-Life/Career-and-Professional-Development/Career-Outcomes). Given that this existing database can be effectively used for networking, we urge the Sackler students to utilize this resource for their benefit. We also urge the GSC and the Dean’s office to hold a workshop to showcase this resource and guide the students on how to use it most effectively. A stronger alumni network can also be made possible through student organizations such as TBBC, who have been able to form a tight-knit group of peers across programs and class years.

There have been requests for a full-time career development resource to be made available for the Sackler students. However, due to the small size of the school, and the cost associated with hiring new employees and setup, it is difficult to be justified considering that PhD-track Sackler students do not pay tuition. However, if there could be a collaboration between the PHPD programs in the TUSM and the Sackler school, it could potentially provide a critical mass to warrant a full-time career office to serve all the schools on the Boston campus, albeit for broader services such as resume reviews. The changing landscape of the post-graduate work opportunities also indicate that there is a need for alternative career options, related to the healthcare and biomedical professions, which can be addressed through collaborative efforts between the various schools on the Boston campus. For example, last year the Sackler GSC collaborated with the Friedman nutrition school to host a career fair. Even if a full-time career resource center on the Boston campus is not possible, it’d serve the students well if the GSC, the PDA, and the Dean’s office could organize a few resume review workshops for students and post-docs throughout the year.

The bar graph showing the usefulness of the various career development events and resources indicates that most respondents find the seminars organized by Career Paths, TBBC and PDA to be most useful. However, some respondents commented on the focus of these seminars to be heavily biotech or industry-centric, which could undermine the needs of students who are not looking into get into such fields. While in general there might have been an increased number of events with such a focus, it should be noted that the GSC have sought to put out a diverse group of seminars, panels and workshops to help students pursuing any non-academic career path. Historically, the career paths committee of the GSC have focused on non-academic careers since that was the gap that needed to be filled – the Sackler faculty are well-equipped to provide advice on academic career paths, but that is not necessarily true for non-academic ones. In addition, a clear distinction needs to be made between the seminars organized by the various student groups – TBBC seminars will be focused on the biotech industry whereas the GSC seminars are more likely to include a diverse group of topics, based on their mission statements. This being said, it would also serve the GSC well to have a standardized version of event flyers for easy recognition. It would also help to showcase their previous events through the blog so students unable to attend such events can follow-up on what was discussed and presented.

In the last year, the PDA, GSC and TBBC have all worked closely together to host events that have been well-attended and lauded, and this is a trend that should continue to aid students and post-docs alike. However, more visibility and promotion of these events are required for a well-rounded attendance, as indicated by some survey respondents.

MyIDP was indicated to be really useful by the respondents who had used it, although this resources was not used by majority of the survey users. This shows that there is a need for a myIDP workshop that would help guide the students on using the valuable resource, which was deemed to be more useful than talking with thesis advisory committees. This workshop can potentially be done at the beginning of the academic year in September, to help the incoming and the rising students. Recent graduates should also be invited to a panel on different careers as mentioned in myIDP. This would further aid to establish connections between current students and alumni. Additionally, grant writing workshops should also be organized for both students and post-docs, as requested in the survey.

This survey was conducted to gauge student interest in career events and resources and how the existing ones can be tailored to better fit the needs of the Sackler student population. While valuable data was obtained from this survey, it should be noted that this data is inherently biased since the respondents are more likely to seek out career development opportunities within and outside Tufts, and are likely to be more active in participating in events and workshops. Even with these limitations, it can be safely said that Sackler students have laid down a strong foundation of career development resources and events through their own enthusiasm and efforts and grassroots organization. And it is to this collaboration between student organizations and the Dean’s office that we should turn to ensure proper career development resources are made available for Sackler students and post-docs.