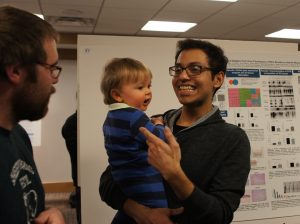 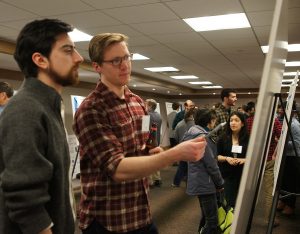 For the first time, the Genetics and CMDB programs came together for a retreat in Portland, Maine for the snow and slush-filled weekend of April 1st. The retreat brought together students from different programs to interact and learn more about one another’s’ research, as well as students from different campuses. Both the Boston and the Bar Harbor Jackson Laboratories contingents made it to Portland to join the Scarborough Maine Medical Research Center Institute (MMCRI) folks for a weekend of science and camaraderie. Students and faculty gave brief talks on their work, followed by a poster session and a fantastic keynote speech on storytelling was given by Christine Gentry. Read on for details on the weekend, written by Jessica Elman (CMDB, Boston Campus), Jessica Davis-Knowlton (CMDB, MMCRI), and Alexander Fine (Genetics, JAX).

We kicked off the retreat with a marathon of 16 talks given by students in year four and up from the CMDB and Genetics programs. Given the challenge to present a summary of their work in seven minutes or less, the students delivered with presentations that were brief but pointed. Three winners were selected by Philip HInds, Ira Herman, and Rajendra Kumar-Singh for their exceptional clarity, creativity, and concision. 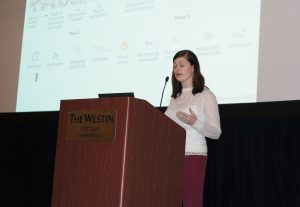 In third place, Melissa LaBonty, a 5th year CMDB student in Pamela Yelick’s lab, presented on her work studying Fibrodysplasia Ossificans Progressiva (FOP). In this rare and severely understudied disease, an abnormal wound repair mechanism results in bone ossification in soft tissue after damage or injury. LaBonty is working with zebrafish to create a model of FOP, which will help to better characterize the disease and understand the underlying mechanisms that drive its progression. In her presentation, LaBonty spoke clearly and at an even pace, with assisting powerpoint slides that displayed only the most essential words: together this style helped keep the group focused on her story and contributed to her ranking as one of the best speakers of the day. 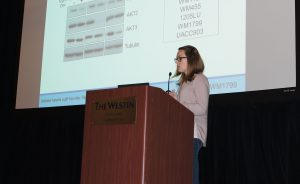 Siobhan McRee, a 5th year Genetics student in Philip Hinds’ lab, came in second among the student presenters. McRee talked about her work in which she is elucidating the roles of different Akt isoforms in BRAF-mutant melanoma. Though this cancer is initially responsive to the drug Vemurafenib, which specifically targets cells with a BRAF-mutation, cells with other driving mutations manage to survive the drug treatment and clonally expand, resulting in significant and potentially deathly relapse of disease. Ultimately, McRee’s work will help to better understand how the Akt signaling pathway is involved in this disease and may result in more therapeutically targetable molecules. McRee’s story logically built from general facts and understanding of BRAF melanoma to ultimately culminate on more specific data showing her findings thus far as well as their implications. Furthermore, her even pace and well-organized slides made her an especially great presenter that day. 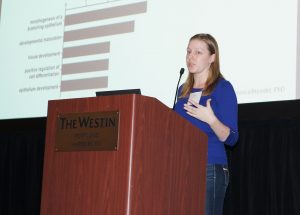 Coming in first place was Kayla Gross, a 4th year CMDB student in Charlotte Kuperwasser’s lab. Gross’s work involves understanding how aging contributes to the breast cancer development, and why certain subtypes of breast cancer are more prevalent in the aging population. Given the prevalence of breast cancer, the impactfulness of Gross’ research is immediately obvious. She worked with an aging mouse model to characterize their mammary tissue as well as performed an RNAseq experiment to uncover molecular mechanisms that might be differentially expressed in young and aging mouse tissue. Gross presented her data in a logical progression, and used illustrative cartoons and animations to her advantage to keep her audience focused and to get her point across. Besides for her brilliant and captivating powerpoint, Gross stood out for her speaking style: she had clearly chosen her words to be concise and to the point, which allowed her to make the most of the seven minutes allotted to her.

All in all, the student presentations were remarkably impressive: in just seven minutes, all the participating students managed to convey the most critical and interesting components of their research. This was a great opportunity for everyone to learn a little bit more about what our colleagues are working on, as well as a chance to practice our “flash talk” skills, which will come in handy whether it’s at a job interview or at Thanksgiving table when your uncle asks you to explain what you’re doing in graduate school for the third time. 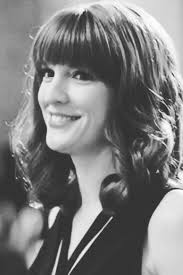 It was suggested by Terry Pratchett, Ian Stewart, and Jack Cohen in The Science of Discworld II: The Globe that perhaps Homo sapiens as a name for our species is a bit of a misnomer considering we are not omnipotent beings. They suggest Pan narrans, the storytelling ape, because we gain understanding by fitting facts into a larger narrative rather than collecting and storing millions of pieces of disparate information.

As communicators of new knowledge to the world (i.e. our scientific findings), it is important for us to keep the nature of our listeners in mind. In her keynote presentation to the retreat, Story Collider’s Christine Gentry, PhD encouraged us all to think about how to frame our narratives to be more approachable and demonstrated some methods of drawing in an audience.

She immediately captured our attention and sympathy by describing the challenges she faced in a wending career path that started with her geek excitement to bring a black widow spider to her Texas elementary school show-n’-tell, traversed through public outreach on the topic of zoology, and has landed at teacher/storyteller in Boston.

She required us to engage with her material by highlighting snippets of stories that we examined in small groups to find the element that made them compelling. We saw that admitting to vulnerability helps to humanize us to our audience in the story from a researcher who relies on fresh donor tissue, that self identity makes us more honest in the story from a researcher who decided not to cover her tattoos, and that we can surprise our audience by not sticking to script in the story from David who refused to tell the inspiration arising from conflict story that reporters sought to box him into. The thread tying all these stories together is that at the core they are about relationships with others, ourselves, our work, and with the larger community.

Perhaps the most memorable take-home point from her talk is that anecdotes do not equal stories. The response to most anecdotes is naturally “so what?” In order for an event or experience to be a story, it must have changed you: “I was callus, this event happened, and now I am more thoughtful” rather than “I am amazing, I did this, and I am still amazing!”

Scientific inquiry must be done in an objective manner and it is imperative that we remain unbiased as possible when we review scientific evidence, but there is room for us to inject our personalities into our presentations and relate our findings to the people who care. Now it remains to us to decide when to do so and to what degree.

On Sunday morning, we took a break from data and lectures; it was time to start working together. The purpose of this retreat was cross-program cooperation, and in our final event of the weekend, we put that goal into action. We separated into breakout sessions, not by program or campus, but by what we are interested in. These small group discussions were designed to get people together with various strengths and experiences to think about how to solve some of the challenges that graduate students face.

So what are graduate students at Sackler interested in discussing? The topics of these breakout sessions varied. Some sessions focused on day-to-day problems that a graduate student might face, like using CRISPR/Cas9 or selecting a sequencing platform. In the CRISPR discussion, participants came to the conclusion that there are no specific shared standards for all the applications of CRISPR and identified strategies to address potential off-target effects.

Other discussions centered on how to accomplish broader training goals, including grant writing, mentoring, and communicating in science. The grant writing section reviewed general writing strategies, like setting short-term, realistic goals, and shared a need for a formalized grant-writing course at Sackler. The mentoring/leadership session discussed existing programs at Sackler where a student can find a mentor, like the Tufts Mentoring Circles and the Tufts Biomedical Business Club. Students expressed a need for a more accessible alumni network, including cross-institutional resources. In the scientific communication group, students were urged to get on social media platforms like LinkedIn, Twitter, and ResearchGate.

In two of the largest breakout sessions, participants concentrated on solving larger scale problems: designing coursework for a modern graduate program in biology and bridging the gap between science and medicine. To help bridge the gap between scientific research and medicine at Tufts, the discussion group recommended that faculty members be identified that can connect labs with clinicians and tissue banks. In addition, access to a course that provides a basic orientation to clinical research would benefit many students at Sackler. In the session on coursework for a modern graduate program, one topic became the clear center of the discussion: computational biology! Whether students had struggled through teaching themselves or were currently stuck with a dataset they didn’t know how to analyze, everyone in the room agreed that coursework in computational biology was crucial for a graduate student’s success in modern biology. In addition to new coursework, students from both programs expressed a need for a revision and update of their first year coursework.

While all of the breakout sessions at the retreat were productive, they are meant to be starting points for continued discussion and collaboration. This retreat should be the springboard that leads to action across programs and institutions. Sackler students are lucky to be in programs that span multiple states, campuses, and research focuses. The cross talk between these groups will make each of our programs stronger and better prepare us for our careers in the future.