The other week my family and I were driving home from an afternoon on the beach playing in the waves, poking through tide pools, and eating seaweed (only Ronan indulged in this last pursuit) when we 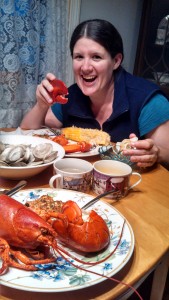 made a spur of the moment stop at a local farm to pick up lobster and a couple pounds of steamers1. Standing at the counter in flip-flops and a swimsuit as the lobsterman weighed out our “bug”, I began to ponder this quintessential Maine summertime treat. In preparing and eating whole lobster the consumer becomes acutely aware of the animal’s physiology; an experience most of us are divorced from for most of the produce we eat.

To start with, you have to decide as you are making your purchase whether you would like a hard-shell or a soft-shell lobster. A soft-shell lobster is one that has recently undergone ecdysis, a shedding of the exoskeleton. The lobster does this by inflating a newly grown exoskeleton with water within the old carapace causing it to pop open and expose the soft new shell. The reason these soft-shell lobsters cost less per-pound than the hard-shell lobsters is that a good proportion of their weight comes from that water rather than meat.

When you get your lobster home and are facing the decision of how to cook him or her2, you might begin to wonder “why on earth do I need to buy it live?” In part this goes back to the molting cycle again: powerful proteases (four members of the calpain family) induce muscle atrophy in the claws in order to reduce the volume of tissue that will need to be withdrawn from the old shell. When the lobster is dead, these proteases cause rapid degradation of the flesh. The other part of the answer lies in the presence of metabolites from micro-organisms. The combination means a much shorter shelf-life for raw lobster meat than you might otherwise imagine.

This inconvenient brevity of freshness forces the chef to consider the question of lobster nociception.  The avoidance behaviors (tail-flipping) exhibited by lobsters upon being placed in boiling water clearly demonstrate that at the very least lobsters have evolved to respond to noxious stimuli. Pain is typically understood to be comprised both of physical sensation and emotional distress, but since it is difficult to observe or define emotion in non-humans using only our experience of human emotion it seems reasonable to minimize the animals’ exposure to noxious stimuli. In Europe this is accomplished by electrocuting crustaceans prior to cooking, but the best compromise I have seen in the US is to make a cut through the lobster’s brain while it is still cold from the fridge before cooking.

There is a huge body of scientific literature out there both utilizing lobster as a model organism and studying it directly (the lobster fishery just in Maine is worth over $1 billion!), but I’ll leave you with just one last lobster physiology anecdote. Ed Kravitz, one of my grandmentors (mentor’s mentor) demonstrated that GABA is a neurotransmitter using lobster (the shell apparently makes a convenient receptacle in which to bath the muscle and nerves), but I was always told that Ed’s favorite part of studying lobster was the taste test!