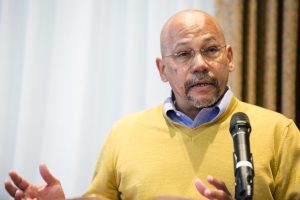 Professor James Jennings has been involved in public service and worked with many foundations, including, The Ford Foundation, The Boston Foundation, The United Way of Massachusetts Bay, the Puerto Rico Foundation, and others. He served as a member of the Committee on Increasing Minority Participation in Health Professions for the Institute of Medicine; member of the Political Participation Panel for the Commission on the Status of Black Americans, National Academy of Science; National Scholar for Public Influences of African-American Churches for Pew Charitable Trusts; National Advisor to the Scholar/Practitioner Program for the Kellogg Foundation’s Devolution Initiative; member of the Advisory Committee for Research and Public Policy for the National Puerto Rican Coalition; and other national organizations.

Other professional contributions include committee memberships and panel presentations for the American Political Science Association, National Conference of Black Political Scientists, and the Urban Affairs Association.

Professor James Jennings has extensive experience working with many neighborhood organizations. He has served as a board member of the Roxbury Comprehensive Community Health Center, the United South End Settlement House, the City Mission Society, the Civil Rights Project, the Urban League of Eastern Massachusetts, the NAACP-Boston Branch, the Hispanic Office of Planning and Evaluation, The Hyams Foundation, and other community and governmental bodies.

In August 2015, Professor Jennings retired from Tufts University. See the Symposium organized by his Department and the University to celebrate his research and teaching.

As Professor Emeritus of Urban and Environmental Policy and Planning, James Jennings has been involved in several research projects in the areas of housing, youth, education and public health. In 2016, he assisted in the design and development of a major campaign outreach program for the Massachusetts Health Connector to investigate lower health insurance rates in Latino communities in Massachusetts. This research, in partnership with Archipelago Strategies Group (ASG), resulted in a campaign strategy which increased Latino insurance enrollments significantly in Massachusetts. In this same year, he was retained by the Boston Public Schools to collect data relevant to population and enrollment projects by race and neighborhoods; this information was incorporated into a 10-year facilities plan report. More recently, the City of Boston utilized his services to conduct a preliminary assessment of its My Brother’s Keeper initiative, focusing on enhancing opportunities for young Black and Latino males. He was also appointed as Special Assistant to the General Counsel for the Boston Housing Authority to assist in the collection and analysis of data related to assessments of fair housing in Boston and the Greater Boston region (2016 – 2018). Currently he is completing a case study of Boston’s Fairmont Corridor Project, and also a study assessing the role of foreign-born workers in Boston’s economy.