Greece and the Euro: From Crisis to Recovery, Fletcher School of Law and Diplomacy, April 12, 2019 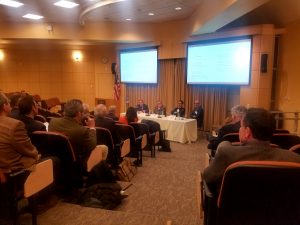 The conference was co-organised by Prof. George Alogoskoufis, Karamanlis Chair, Fletcher School, and Prof. Kevin Featherstone, Venizelos Chair, London School of Economics. The conference has benefited from the  financial support of the Onassis Foundation.

The purpose of the conference was to assess the causes of the Greek crisis and the prospects for the Greek economy after the conclusion of the economic adjustment programs in 2018.

The morning plenary sessions and the two afternoon parallel sessions concentrated on the economics and politics of reform in Greece.

Two panels of speakers provided overviews of the economic, institutional, political and cultural aspects of Greece and the Euro, both before and after the crisis. 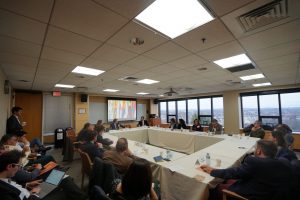 The afternoon sessions, in which papers were presented by a number of leading economists, political scientists and other experts, concentrated on more specialized aspects of reform of both Greece and the euro area. The sessions were as follows:

The Euro Area After the Crisis
Chair: George Chouliarakis (Ministry of Finance)

Yannis Ioannides (Tufts), Reforms, Deficits and Debt: a Unifying Framework for a Fiscal and Monetary Union
Athanasios Orphanides (MIT), Overcoming the Euro Crisis.
George Alogoskoufis (Fletcher and AUEB) and Laurent Jacque(Fletcher), Economic and Financial Asymmetries in the Euro Area
George Pagoulatos (AUEB and ELIAMEP), The Euro Area after the Crisis: An Economic and Political Stocktaking

Kyriakos Mitsotakis, Leader of the Opposition in Greece, at the Fletcher School, March 7, 2019

The leader of the opposition in Greece, and President of New Democracy (ND), Kyriakos Mitsotakis, spoke at the Fletcher School, Tufts University in Boston on March 7, 2019.

He gave the annual Behrakis Family Lecture. The Behrakis Family Endowed Lecture Series, within the Constantine G. Karamanlis Chair in Hellenic and European Studies, is presented annually to promote the understanding of Greece’s domestic and international affairs.

He was introduced by Professor Ian Johnstone, Dean ad interim of The Fletcher School, while  Professor George Alogoskoufis moderated the conversation.

Describing the economy as the issue that will determine the outcome of the forthcoming elections, main opposition New Democracy (ND) leader Kyriakos Mitsotakis on Thursday estimated that 2019 will be a decisive year for the country’s path to recovery.

During his speech at Tufts University, the leader of the main opposition party argued that the country needs a “political change” to achieve stronger growth that would be sufficient to actually improve the daily lives of Greek citizens.

Mitsotakis said that he hopes that 2019 will be a year of significant and substantial political change. “I am not saying this because it is my obligation to do so as opposition leader but because I fundamentally believe that political change is now a prerequisite for Greece to face the future with sustainable optimism,” he added.

Mitsotakis estimated that for the first time markets view the possibility of elections as a positive development that will help consolidate stability.

Moreover, he analysed the main pillars of his economic programme, which, he said, focuses on investment and aims at growth.

“I am very worried about inequality,” he said and added: When I proposed the development plan for the next day, I was always talking about growth without exclusions. Therefore, growth in Greece today must be driven by investment. It can no longer be driven by consumption, as was the case in the past. And in order to promote growth through investment, some basic conditions must be created.

Regarding how Greece will become an attractive investment destination, Mitsotakis noted that he will “aggressively” move to improve the business environment through the methodical implementation of targeted reforms that will correct the systemic causes of corruption and bureaucracy.

Link to the Fletcher Invitation to the Lecture

A Seminar with President Hollande at the Harvard Kennedy School, March 10, 2019 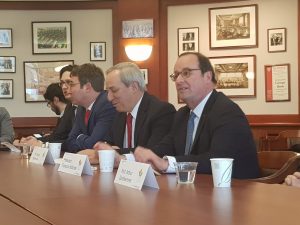 Professor George Alogoskoufis chaired a seminar with Francois Hollande, President of the French Republic 2012-2017, on the European Union and the transatlantic relation, at the Harvard Kennedy School of Government, on Sunday, March 10, 2019.

The seminar was organised in the context of the annual Europe Conference of students from Harvard and the Fletcher School, Tufts University, and was attended by both faculty and students from the two institutions.

President Hollande made an opening speech, and there was an extensive Q&A session coordinated by Professor Alogoskoufis. The discussion revolved around issues such as migration, enlargement, the economy, trade, and the governance of the European Union and the Euro Area.

CHALLENGES TO THE 21ST CENTURY: EUROPEAN AND AMERICAN PERSPECTIVES SERIES

The Constantine Karamanlis Chair in Hellenic and European Studies, The Fletcher School, Tufts University in collaboration with the International Security Studies Program at The Fletcher School, co-sponsored and hosted the following events at The Fletcher School. The events were organized by Ms Renee Haferkamp I under the auspices of the Minda de Gunzburg Center for European Studies at Harvard University, and in collaboration with the Weatherhead Center for International affairs, the Kokkalis Program and the Nicolas Janssen Family Fund in Brussels.