Many museums struggle with maintaining a good balance of technology – enough to attract (and keep the attention of) younger crowds, but not so much that visitors who go to museums to “unplug” are unable to do so. The best solution is to give visitors options. They can sign up for the facebook and the instagram feeds; they can walk past the video touch screens. Our new series, Museums Gone Viral, brings you real ways that museums have used technology and the internet to reach a variety of visitor groups.

Art history. Take a moment to think about the images and associations that are conjured up by that term.

For those of us not already interested in the subject, art history might bring to mind dusty lectures with endless slides of facts and staggering stacks of notecards. If you’re anything like me, you probably balk at terms like “abstract expressionism” and “impasto.” I’ll admit right off the bat that I am not an art history enthusiast, and that I usually find interpreting art with others to be confusing and anxiety-inducing. (My co-editor, Jess, on the other hand, is getting her masters in art history and museum studies – so she will probably take exception with my views on the subject.)

Then I found the LA County Museum of Art (LACMA) on snapchat – more on their account later. You’re probably thinking “snapchat? Why would a museum ever join snapchat? What’s the point of that?” And at first, I agreed. With so much out there for museums to keep up with – facebook, instagram, twitter – not to mention their own websites, why add another form of social media to the mix?

So I started digging a little deeper into who actually uses snapchat. As it turns out, snapchat has over 82 million users between the ages of 13 and 25. And rather than sending inappropriate content, many snapchat users send photos and videos that they find funny. According to users, the appeal of snapchat lies in its ability to disappear – the short, immediate nature becomes an art form in itself with mandatory comedic timing built in. When you only have 10 seconds to get a joke across, you have to be right on, and that usually leads to people sending something ridiculous or silly. Not surprisingly, that time constraint makes the app more “fun” according to respondents in a survey about how they use snapchat. (The survey information is available here and here, along with a lot of fascinating information about snapchat in general.)

That 13 to 25 year old category is one of the key demographics that museums sometimes struggle with reaching. Snapchat might just be a great way to reach that generation. Technology changes so quickly, and as we leave that age demographic, the use of technology (not to mention the corresponding terminology) starts to come more from study and less from pure osmosis. The only problem is doing it right. If you try too hard, your snaps (the term for the images and videos sent through the app) can come across as outdated or lame. So make sure that you understand what terms and pop culture references you are using. As Lucy Redoglia, the social media manager for LACMA, says, it’s not necessarily easy. She spends portions of her day searching online for popular phrases and terms, as well as lots of examples for how these phrases are generally used. Remember also that you don’t need to use popular terms at all. You can make your collection accessible without needing to use different terminology.

As a snapchat user myself, I find that the LACMA snaps are funny and bring me closer to the art – even though I live across the country and may never have a chance to visit. If the snap is particularly good, I find myself thinking about it afterwards. Things like, “we might see that as a ‘dad bod’ now, but I wonder what the artist thought when they created that?” I think many museums would be very happy to have people becoming familiar with their collection, not to mention thinking about it beyond their 10 second image. (Although I am in grad school right now, and in a museum education program, so there really isn’t a whole lot of time that I’m not thinking in depth about museum-related things!)

Some people might argue that the format of snapchat takes away from the respect that the art deserves. However, consider that co-editor Jess’s response to my desire to write this post was “honestly [the LACMA snapchat is] a very accurate depiction of how my art historian friends with snapchat act in museums.” Also consider that many snapchat users are at an age where they might need to build the tools to look closely at art and appreciate it on a deeper level. If some of your snaps bring those users into the museum to look closer at the “eyebrows on fleek,” isn’t that half the battle? Once visitors choose to come to the museum, or look at your website, it’s up to you to help them build the skills to look more critically.

Take a look at some of LACMA’s snaps below (found in this interesting article). They make use of the short timing and silly nature of the app, along with much of the terminology that is popular with people who use snapchat. 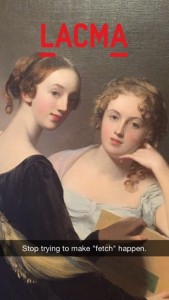 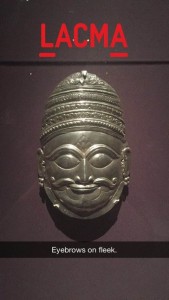 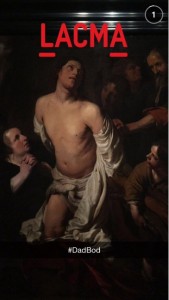 Starting next week, we will be introducing a new series titled “Museums Gone Viral.” These periodic posts will look at different ways that museums are using the internet and social media to create innovative ways of enhancing education, discussion, and awareness. If you come across something that you think is particularly interesting or effective, let us know!  If you’re interested in writing a guest post about something that your museum does on the internet, we would also love to hear from you. Jess and I can be reached at tufts.museum.blog[at]gmail[dot]com.

Keep your eyes open early next week for our first post in this series!