With increasing blood alcohol concentration, a secondary pathway for ethanol metabolism kicks in using the microsomal cytochrome P450 enzyme CYP2E1 (7). When the ethanol concentration is low, CYP2E1 is only responsible for oxidizing around 10% of the ethanol, but as the blood alcohol concentration increases, so does the activity of CYP2E1 in metabolizing ethanol. Chronic alcohol consumption increases the CYP2E1 levels, which allow the enzyme to play a larger role in ethanol metabolism in chronic alcoholics. In addition to the oxidation of ethanol, CYP2E1 also oxidizes a variety of substrates including certain drugs (3). 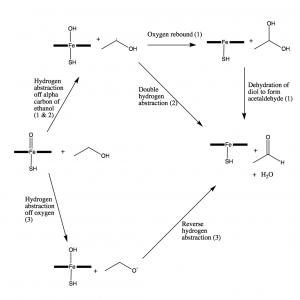 Figure 8: Three proposed pathways for the oxidation of ethanol to acetaldehyde by cytochrome P450 2E1. 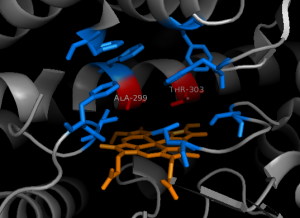 Figure 9: The active site of CYP2E1. Ala299 and Thr303 function as the active residues, while the blue residues form the binding pocket (pbd file: 3e6i).

Wang et al. determined that the reverse dual-hydrogen abstraction (R-DHA) mechanism is predominant in polar environments, while in nonpolar environments the oxidation of ethanol is carried out competitively through the gem-diol mechanism and the R-DHA mechanism. This conclusion led Wang et al. to propose an argument for how CYP2E1 is able to adapt a significant role in ethanol oxidation when the blood ethanol concentration is high. The discovery that ethanol is a modulator of CYP2E1 substrate metabolism, signifying that ethanol oxidation by CYP2E1 can be induced by ethanol, was the key event that allowed Wang et al. to be able to explain this adaptive role of CYP2E1 (8).

When blood ethanol concentration is low, there is only a small amount of ethanol in the heme pocket, contributing to a small bulk polarity which causes the competition between the gem-diol and R-DHA mechanisms to occur. When blood ethanol concentration rises, more and more ethanol molecules enter the heme pocket, increasing the bulk polarity, allowing the R-DHA mechanism to become the primary mechanism through which ethanol oxidation occurs which in turn causes the rate of ethanol metabolism by CYP2E1 to increase as the competitive factor is eliminated (8).