Register for a Zoom link. 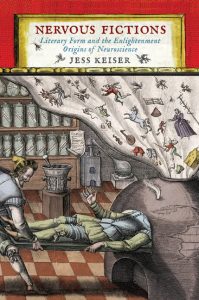 This talk is about early neuroscience and the curious literary forms it generated. Beginning in the mid-seventeenth century, neurophysiology experienced a series of remarkable advances. As more about the brain and nerves became known, the period began to speculate about the relationship between these organs and the mind: How did the nerves carry sensations to the psyche? How were memories stored in cerebral matter? How did thoughts and emotions travel through the winding paths of the cerebrum? The period also developed a corresponding mode of writing that Keiser calls the “nervous fiction.” Rather than a plain description of bodily organs, a “nervous fiction” employs figurative language and other literary techniques to transform the nervous system into something else: a city, a musical organ, an optical instrument, a watch. In doing so, it seeks to reconstruct, through imaginative means, the workings of the nerves and brain. Nervous fictions are attempts to make sense of matter’s relationship to mind. While the period’s tendency to metaphorize the mind—to liken it to a wax tablet or a mirror, say—is well known, these related nervous fictions have received little attention. And yet understanding the work of these fictions also means appreciating the subtle interplay of science, psyche, and literary form in the seventeenth and eighteenth centuries.

This talk is part of the New Books Series sponsored by the Center for the Humanities at Tufts.

Jess Keiser is an assistant professor of English at Tufts University.