Register for a Zoom link and passcode. 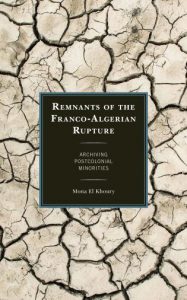 At the end of French colonization in Algeria, four categories of people held French citizenship or had strong ties with France: European settlers, Jews, mixed-race individuals, and Harkis. The end of the War of Independence exiled most of them from Algeria, traumatized them in various ways, and transferred many to metropolitan France. Remnants of the Franco-Algerian Rupture: Archiving Postcolonial Minoritiesexamines the legacies of these transnational identities through narratives that dissent from official histories, both in France and Algeria. This literature takes particular stories of exile and loss and constructs a memory around a Mosaic father figure embodying the native land, Algeria. Mona El Khoury argues that these filiation narratives create a postcolonial archive: a discursive foundation that makes historical minorities visible, while disrupting French and Algerian hegemonies. El Khoury questions the power of literature to repair history while contending that these literary strategies seek to do justice to the dead Algerian father, even as they valorize enduring minority identifications.

This talk is part of the New Books Series sponsored by the Center for the Humanities at Tufts. 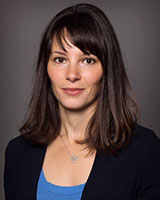 Mona El Khoury is an Assistant Professor of French and Francophone Literature at Tufts University. She was a CHAT Faculty Fellow in 2017-2018.

Center for the Humanities at Tufts