From 1998 to 2008, the average level of debt for medical students increased by more than 50%.1 The cost of medical education has been rising double the rate of inflation.1 The average tuition cost to attend medical school per year in the United States is approximately $55,629, which amounts to $222,516 in tuition debt for four years of school.2 This calculation does not include fees, health insurance, housing and living expenses, which vary widely by location and the individual. There are also costs that are difficult to anticipate before medical school, but become apparent quickly. Students must pay to take national licensing exams that total approximately $2,500, but can vary due to travel costs as one exam is only offered in five cities in the country (Step 2 CS). Finally, during their final year, students must apply and interview at residency programs to continue their training as physicians which can amount to many thousands of dollars.  With accruing interest, which can be as high as approximately 7% depending on the year, a medical student, like me, with no financial aid or parental help can expect to graduate with a quarter of a million dollars or more in federal loans. For someone like me, this number could be higher because of the high costs of my school, the expensie of living in Boston, and earning a second degree. These loans continue to accumulate interest during the following years of training when new physicians, also called residents, make a salary that, per hour worked, approaches what hospital cleaning staff earn.3 In the end, some physicians may pay two to three times their original amount with interest over multiple decades.4

Why does this matter? This is not a problem of bankrupting physicians, as the majority, even those in primary care will successfully pay off their loans.5–7 The problem is four-fold. First, increased debt is associated with increased risk of mental illness and substance use disorders among students as well as decreased performance on examinations.8,9 Second, increased debt affects professionalism of future physicians such that students feel their debt limits altruism and engenders a sense of entitlement for high salaries.10 Third, the cost of medical school can be prohibitive, especially for students from underrepresented minorities which limits the diversity of the physician workforce.1,4 Fourth, many students feel pressure to enter more lucrative fields that our fee-for-service billing system rewards, not primary care, which has resulted in a healthcare system with significantly more specialists and a lack of primary care physicians.11 The two primary issues affecting healthcare disparities and costs in the US, that are a result of increased student debt, are the lack of diversity of physicians combined with excessive specialization.

In the US, specialists outnumber primary care physicians.12 Despite this level of expertise, the US spends more money on healthcare than any other developed nation and has worse health outcomes.13 Two factors that contribute to increased costs are the salaries of physicians, which compared to other countries are higher in the US, and the fee-for-service model that encourages specialization and thus, costly interventions. Increased emphasis on primary care has been shown to decrease healthcare costs by increasing preventative services and decreasing interventions and procedures that are costly as well as improving health outcomes.11,13  Students with increased debt are more likely to give more value to future salary when picking a specialty and are more likely to switch away from a primary care specialty.14,15 This causes a shift away from primary care specialties such as Pediatrics and Family Medicine which have the lowest average salary. There is a gap in primary care physicians in the US which will continue to widen if more medical students do not choose to enter the field.4 The inability of the United States to meet the needs of the population with primary care physicians everywhere will contribute to excessive and rising healthcare costs.11 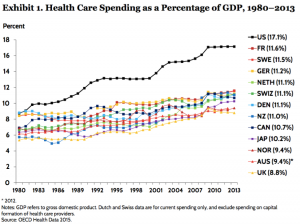 Debt can be prohibitive to minorities which decreases diversity. Concordance of race, ethnicity, and language between physicians and patients has been linked to better health outcomes.16 Currently, our physician workforce lacks diversity and does not mirror the composition of the US population.4 Health outcomes are poorer for racial and ethnic minorities and these disparities increase healthcare costs.17 Decreasing the cost of medical education could diminish barriers that inhibit underrepresented minority students from attending medical school. An increase in diversity has the potential limit healthcare disparities and decrease healthcare costs.

The steady increase in medical student debt is unsustainable and could cause debt burdens to climb to catastrophic levels such that by 2030 approximately 50% of physicians’ after-tax income could be shunted to loan payments for projected average debt burdens of close to a million dollars.4 There are various proposed solutions including shortening medical education to three years, placing a limit on institutional tuition and fees, fundraising from alumni, and expanding state and federal loan forgiveness programs in exchange for public service. However, altering medical school length to three years does not address the increasing cost of attendance. Placing a limit on tuition and fees does not address current debt burdens placed on students that de-incentivize primary care. Fundraising from alumni is not a feasible option to cover the cost of attendance for all students, especially as many alumni have substantial debt burdens of their own. Finally, although expanding public service loan forgiveness programs is a noble option, it fails to address the rising attendance costs and currently, proposed federal budgets will limit funding of these programs.18 Many countries, such as Canada and the United Kingdom, have federally funded medical education. In those countries, more than half of physicians are primary care doctors, and physician salaries, healthcare costs and spending are lower, and health outcomes are better.13

I propose that we can address health outcomes, disparities, and the cost of healthcare in the United States by making medical school free for students funded by federal and state governments. Currently, it is unclear how much it costs to educate a medical student and for what proportion of that cost the student should be responsible.4 Governmental funding of medical education would cause increased transparency and more fairly distribute cost burden between students, institutions and the government. This would allow the US to pay physicians less and encourage medical students to enter primary care.

Critics of this solution will argue that physicians are overpaid already and may not agree with their tax dollars funding medical education. However, many financial models have shown that primary care physicians have expenses more than their income for the first three to five years after residency19 and other models leave the physicians with only $200-$600 per month in flexible income.5 Further, the government (and tax payers) already fund medical education through Medicare funding of residency programs.20 Some contend that it is too costly for the government. However, free medical education will increase the primary care workforce and diversity of physicians. Decreased spending on physician salaries and specialist-driven interventions and improved health outcomes will lead to healthcare cost savings that will outweigh the cost of funding medical education. 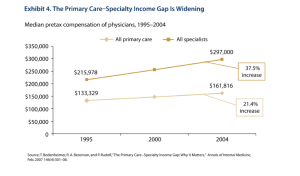