We’ve seen how CRISPR/Cas9 systems can be leveraged to achieve highly selective cleavage of double-stranded DNA, with higher efficiency than previous technologies such as zinc finger nucleases or TALENs.  And we’ve seen a few pathways where the technology is adapted for different types of genome editing and modification.  But the CRISPR/Cas9 system might also be used to directly translate new therapies and cures for diseases.  To illustrate this, we discuss a potential cure for HIV involving CRISPR/Cas9 genetic editing.

HIV Background: HIV (Human Immunodeficiency Virus) is a virus that is able to integrate its genome into the host cell genome during infection.  HIV primarily infects CD4+ T cells, and leads to AIDS (acquired immunodeficiency syndrome) if untreated.  HIV viral particles store their genetic information as double-stranded RNA and use a reverse transcriptase to convert their genome into double-stranded DNA.  This process also introduces many random errors into the HIV genome, allowing the virus to rapidly mutate.  The DNA is inserted into the host cell genome by integrases which use LTR (long terminal repeat) sequences on the viral genome to integrate with the host DNA.  The result is a reservoir of viral DNA in infected cells (also called a provirus) that can continuously produce new viruses that can infect other immune cells.  Currently, the disease can be controlled by rigorous anti-retroviral therapy (therapies targeting the unique reverse-transcription step in the HIV replication process).  However, the latent reservoir of HIV is unaffected by this therapy, and therefore the disease cannot be completely cured by such therapies.  The threat of virus re-emergence is always there.

The CRISPR/Cas9 system can introduce double-strand breaks in DNA at a site determined by the guide RNA.  Researchers targeted a CRISPR/Cas9 system to target the LTR regions of the HIV provirus at positions T5 and T6.  Jurkat cell lines with HIV provirus-like regions that produced GFP instead of the viral proteins were used to determine the effectiveness of the potential Cas9-based therapy (fig 1). 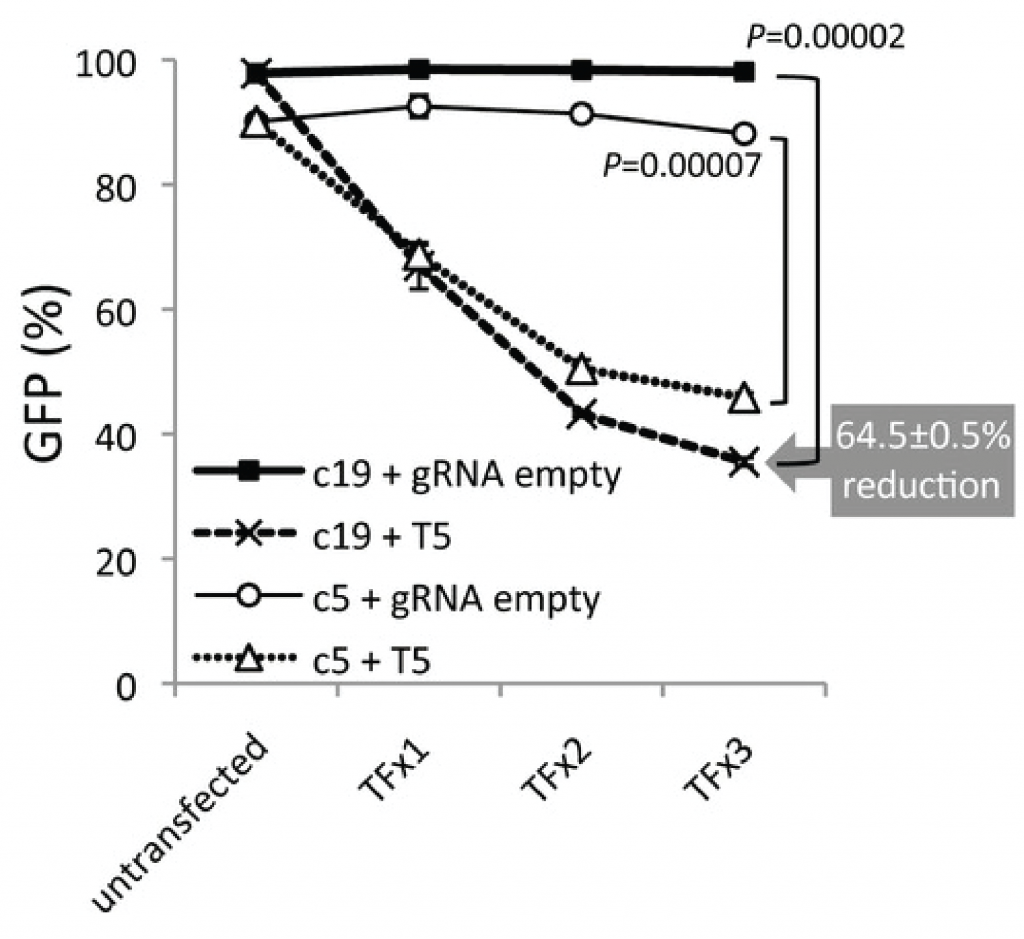 Cells were transfected with a plasmid containing the humanized CRISPR/Cas9 and guide RNA genes. Targeting of the LTR by the guide RNA resulted in significantly decreased transcription of the genes under the control of the LTR promoter, as demonstrated by flow cytometry of cells with GFP under LTR promoter control.  Furthermore, multiple transfections by the Cas9 plasmid were shown to significantly reduce the transcription of GFP, indicating that the CRISPR/Cas9 system would be effective in preventing the reactivation of latently infected cells (fig 3).

Jurkat Cell lines c19 and c5 with HIV proviral-like insertions shown above and expressing GFP under LTR promoter control underwent rounds of transfection with cas9 plasmids containing T5 targeting guide RNAs.  In c19, the percentage of cells still expressing GFP was reduced from 97.8% to 35.5% over the course of 3 transfections by the cas9 plasmid (p = 0.00002) (fig 3).

Sequencing of the LTR promoter region revealed various mutations at the cut site, with deletions ranging from 1 to 31 bp (fig2).  These mutation patterns are likely to be the result of the non-homologous end-joining pathway, as the cells attempt to repair the DNA after double-strand breaks were induced.  This indicates effective cleavage of the proviral genes by the CRISPR/Cas9 pathway. 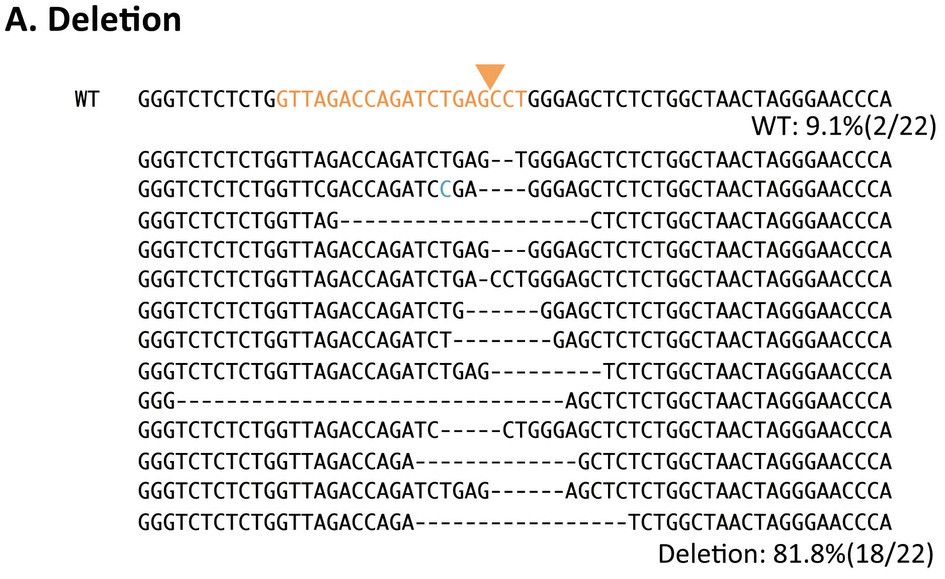 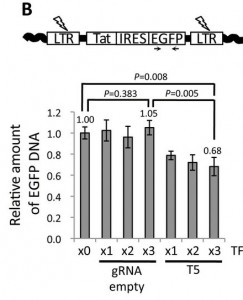 But more importantly, the researchers were also able to demonstrate that CRISPR/Cas9 systems can excise the HIV provirus from the host genome.  After 3 rounds of transfection with CRISPR/Cas9 targeting of the LTR, on average, the provirus was completely excised from the genome in 31.8% of all cells (fig4).

This provides some initial evidence that CRISPR/Cas9 systems may eventually be used to effectively treat or even cure HIV infections.  A recent paper expanding on this research showed that transfection of macrophage cells with the Cas9 plasmid targeting HIV genes can confer immunity to HIV infection to the transfected cells, and thus Cas9 plasmids could even be used as vaccines against HIV, or other viral diseases (Hu et al. 2014).

The translation of these engineered CRISPR/Cas9 systems to actual gene therapy in HIV patients still has a number of hurdles.  Namely, the efficiency must be quantified and improved, off-target effects must be minimized, and an appropriate delivery system must be developed.  Hu and colleagues recently demonstrated that their CRISPR/Cas9 system for treating HIV infected cells produced no observable off-target effects.  They concluded that Cas9 provides a viable approach to curing and preventing HIV infections, as well as other infections, and can provide a personalized approach to specific HIV targeting.  Given the small size of the CRISPR/cas9 system, a lentivirus vector could deliver the CRISPR system.  Perhaps the HIV viral particles could even be hijacked to cure HIV, they are already designed to specifically target the infected CD4+ T cells.  Other delivery methods may also be feasible, but wouldn’t fighting HIV with HIV be poetic?