Bhaskar Chakravorti writes: The collective silence will be the most viral tweet in the world. 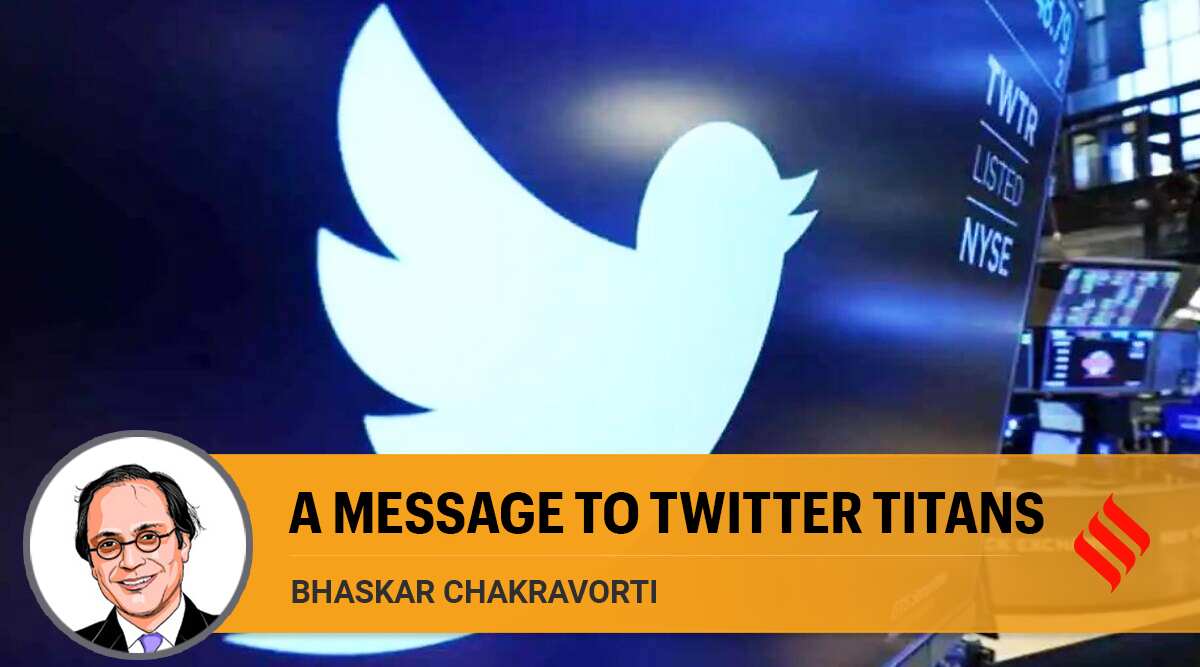 Over the course of a month-long drama, Elon Musk discovered a basic truth: Free speech is not free. Now, even the rest of us without $44 billion to spare are finding out the high price that we must pay as well. The public square has been reduced to a public spectacle. Shortly after walking into the headquarters of Twitter — the company he committed to buying, then regretted buying and ultimately bought for $44 billion — kitchen sink in hand, Musk adopted a more sober tone with advertisers. Musk’s guarantee was that he would not allow Twitter to devolve into a free-for-all hellscape.

The crazies want to clamber back on. Musk himself has been deluged with requests from American right-wing politicians to Russian media bosses to end the ban on the crazies. The emperor of the crazies, Donald Trump, fired off a note saying that he was “very happy” with Musk in the building. Racists, neo-Nazis and far-right conspiracy theorists with access to the platform are having a field day. In advance of a highly polarised midterm election next week, disinformation is washing over the country and tensions are high.

To allay everybody’s worst fears, Musk declared that he would appoint a “content moderation council” at Twitter whose job would be to sift through the garbage and take out the toxic stuff. Sadly, the council is not in place yet; had it been its first task would have been to strike down Musk himself. After a deranged nut invaded the home of Nancy Pelosi, the Speaker of the US House of Representatives, with the intent of breaking the 82-year old’s kneecaps, binding her with zip-ties and kidnapping her, conspiracy theories and lies exploded on Twitter and Musk helped spread them further with his own commentary blasted out to his 113 million followers, “there is a tiny possibility there might be more to this story.” Now we all know that Musk likes to fool around on Twitter, but assault had grave consequences. The would-be kidnapper could not find his quarry who happened to be on the other side of the country but succeeded in smashing her 82-year-old husband’s head with the hammer intended for his wife’s kneecaps. Musk did delete his own vile content but the damage had been done. His re-tweet was re-re-tweeted by his devotees. There could not be a worse moment for the fox to have bought the hen house.

Not that a fellow as clever as Musk ever needs to take a break, but he’s been moving at warp speed. He was already hard at work on a bold new business model for the company. He intends to charge a fee to users who earn a coveted blue check marked “verified” status. Even this project turned into a horror show with Musk haggling with the master horror storyteller, Stephen King, about the fee.

With all this chaos within a few days of the Musk takeover, you would think that #QuitTwitter would be trending, and users and advertisers would be headed for the exits. We are still waiting for the stampede. Former US President, Barack Obama, with the largest follower base on Twitter is still there. Now you can excuse him as he is busy campaigning for the Democrats in advance of the elections and the megaphone matters. But what are Katy Perry’s (number 2 after Obama and Elon Musk himself in Twitter followership) and Justin Bieber’s (number 3) excuses? Among India’s Twitter titans, Narendra Modi, Amitabh Bachchan and Virat Kohli are all staying put and calmly conveying essential information ranging from “celebrating the vibrant cultural traditions of the Northeast” to celebrating with Flamboyance White to explore “the warm, floral and spicy notes” to celebrating “character and conviction.”
To be sure, some celebrities have called it quits. In India, Karan Johar quit Twitter even before Musk walked into the building, “making space for more positive energies”. In the US, TV screenwriter, Shonda Rhimes, was more pointed: “Not hanging around for whatever Elon has planned. Bye.”

This makes me wonder: Should we just accept that a mega-rich narcissist can buy up the world’s prime free speech megaphone and fool around with no consequences? While the shareholders of Twitter got a good deal, it is stunning that no one bothered to wonder how the 240 million Twitter users felt about the takeover. In fact, my research team, Digital Planet in collaboration with our analytics partner, Ripple Research, studied how Twitters users were responding to the Musk takeover drama – from February till the end-October. We analysed over 16 million tweets from the US, India, the UK, South Africa and Nigeria and categorised them by sentiment. The negative sentiments handily beat the positive sentiments and the negatives jumped to almost 5 times that of the positive on the day Musk walked in the door.

So, here’s an idea. Twitter’s early claim to fame was that it lifted the voice of the voiceless. It brought masses of peaceful protestors to Cairo’s Tahrir Square and helped overthrow an odious regime. It amplified the Me-Too movement and brought down many odious predators. It was an essential weapon of the information warfare in Ukraine in the fight against an odious aggressor. It helped so many across India locate an empty hospital bed or an elusive oxygen tank during the horrifying second wave of that odious pandemic. Once again Twitter must give the voiceless a voice. They say three-fourths of all Twitter users produce only three per cent of all tweets. You in that majority don’t have that much to lose if you just switch off for a while. To the Twitter titans, why kowtow to a Chief Twit? Take a sabbatical until guarantees of good governance, decency and fairness are rebuilt.

The collective silence will be the most viral tweet in the world. The advertisers will pay attention and Elon Musk will pay an even higher price for exercising his right to his personal version of free speech.