Digital Planet > On the Record > Musk doesn’t own Twitter yet, but conservatives are racking up followers

Musk doesn’t own Twitter yet, but conservatives are racking up followers

Tucker Carlson, Donald Trump Jr. and Republican lawmakers are seeing their follower counts spike, while Democrats’ are on the decline 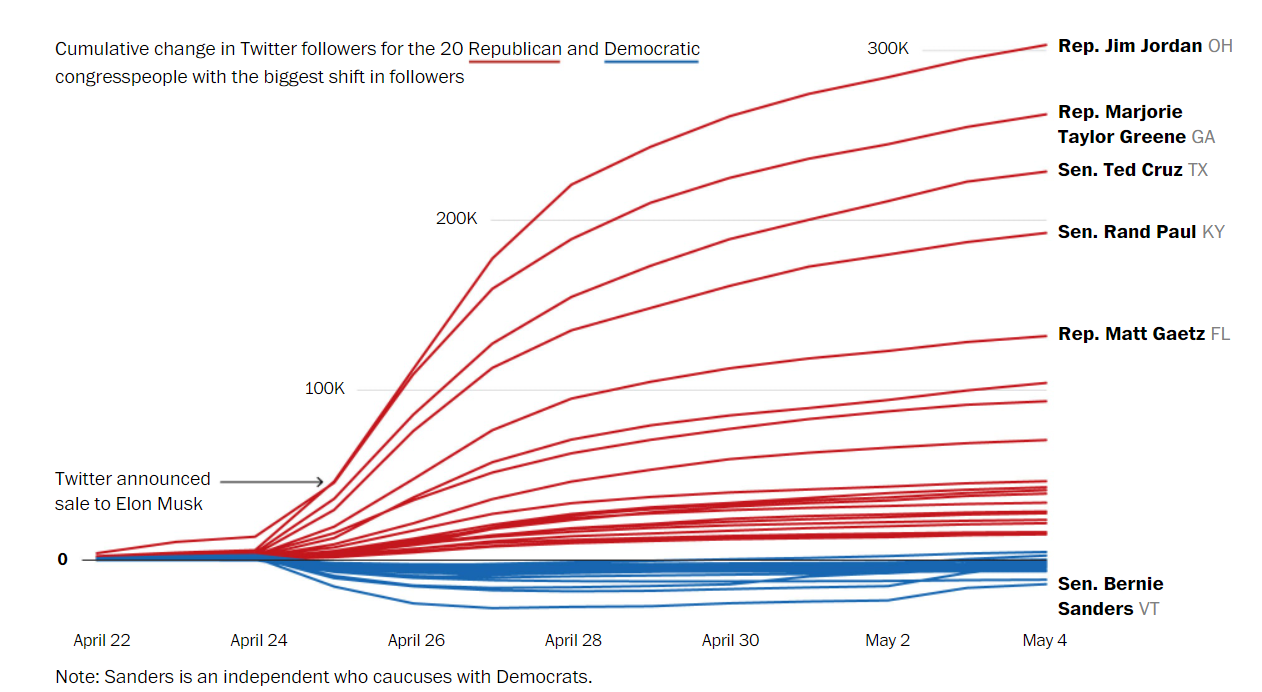 “You just became a little more powerful,” Carlson told his millions of viewers hours after the deal was announced. “It’s that simple and it’s that profound.”

Indeed, Carlson was about to get a little more powerful himself: Since April 25, the day Twitter accepted Musk’s offer, his Twitter followers have jumped by more than 230,000 — a nearly 5 percent increase.

There’s still plenty that could disrupt the deal; Musk himself tweeted Friday that the sale was “on hold” while he investigated fake accounts on the site.

But Carlson’s gain is one of several early signs that Musk’s takeover is already shifting the dynamics of one of the most influential social networks in the country. A Washington Post analysis of hundreds of Twitter accounts found that right-leaning accounts, including Republican members of Congress, received a surge in followers since the deal was announced last month, even as their Democratic counterparts’ followings flatlined.

Musk has no control yet over internal decisions at Twitter, and the deal isn’t expected to close for months. Yet the data is an indication of how Musk’s leadership as a “free speech absolutist” could shape the future of the social network — transforming which users flock to the platform. The change is happening in the crucial months before the 2022 midterms, when a shift in Twitter use could shape the national political debate and media coverage of races.

“It definitely says something about the possible future of Twitter,” said Darren Linvill, an associate professor at the Clemson University Media Forensics Hub. “You’re going to see a spike in conservative users.”

Several high-profile conservative users baselessly attributed the sudden boost to the company treating conservatives’ accounts differently the instant the Musk deal was announced. (Twitter declined to comment on the claims but has previously said that it does not make content moderation decisions based on political ideology.)

“While I’m awesome and totally deserving of 87,000 new followers a day it seems that someone took the shackles off my account. Wonder if they’re burning the evidence before new mgmt comes in?” tweeted Donald Trump Jr. Similarly, Carlson’s show suggested that Musk had “restored” free speech to network, reactivating his previously suspended account.

Twitter spokesman Trenton Kennedy said in a statement that the company has been looking into the fluctuations. “While we continue to take action on accounts that violate our spam policy which can affect follower counts, these fluctuations appear to largely have been a result of an increase in new account creation and deactivation.” Early fluctuations in conservatives’ follower counts were first reported by NBC News.

Twitter downloads are on the rise. According to estimates from analytics firm SensorTower, Twitter’s mobile app has been downloaded 10.8 million times since Twitter announced its deal with Musk. That’s up 15 percent from the prior 17 days.

It seems conservatives are taking Musk’s purchase of the company as an invitation to return to the website.

Musk’s deal was probably viewed as a signal that people who were previously suspended from the site could return, prompting people to follow Republican political leaders, said Bhaskar Chakravorti, dean of global business at the Fletcher School at Tufts University.

Musk’s early rhetoric about his plans for the company resonate with conservatives’ long-held criticisms. He said on Tuesday that he plans to reverse Twitter’s permanent suspension of former president Donald Trump, a high-profile decision that emboldened conservatives’ accusations that tech companies prejudice such users. Musk said that Twitter needs to be “much more evenhanded,” adding the company has a “strong left bias.”

In recent weeks, Musk also may be driving followers through his own highly watched interactions. He replied to right-wing commentator Ben Shapiro, after Shapiro wrote that The Washington Post and “every Left-wing blue check mark” were panicking over Musk’s comments about the platform. Shapiro, who has a history of incendiary comments about race and sexuality, has seen his following spike by more than 400,000 since the Musk purchase, bringing his total following to more than 4.3 million.

Musk responded three times since the sale to right-wing activist Mike Cernovich, who has promoted false conspiracy theories including the discredited “Pizzagate” hoax. Cernovich’s following has increased by nearly 74,000, an 8 percent increase bringing his follower count to more than 960,000.

Representatives for Carlson, Jordan, Cruz, Sanders, Waters, Feinstein, Shapiro and Cernovich did not immediately respond to request for comment. A representative for Trump Jr. declined to comment.

This friendly rhetoric could appeal to conservatives, encouraging them join the site. But if Twitter becomes too aligned with one political party, it could be bad for the company’s bottom line, said Linvill.

Twitter historically has a more liberal user base than Facebook, a significantly larger social network. A 2021 Pew Research Center study found that more than a third of Democrats and Democratic-leaning independents report using Twitter, nearly double the percentage of Republicans who say they use the social network. That’s a much wider gap than Facebook, which is used by 72 percent of Democrats and 69 percent of Republicans. However, other social networks such as Instagram, WhatsApp and LinkedIn also report similar disparities as Twitter.

This leftward lean may have contributed to how Twitter users talked about the sale on the platform: An analysis by a team at Tufts University of more than 4 million tweets found that posts reflecting positive emotions, such as joy, and negative emotions such as anger spiked after Musk started publicly criticizing the company in late March. But once news of the takeover broke, the dominant reaction settled, reflecting sadness and anger.

“I think people felt [the takeover] was a bridge too far,” said Chakravorti. “The sentiments turned negative and significantly negative.”

One reason users might hold polarizing views about Musk’s ownership of Twitter is because they have different ideas about how the company moderates content. A separate 2021 Pew Research Center study found that Republicans on Twitter are far more likely to say Twitter has adopted overly aggressive content moderation policies. Nearly 60 percent of Republicans said it’s a major problem that Twitter reduces the visibility of certain posts, compared with 17 percent of Democrats.

Evelyn Douek, a senior research fellow at the Knight First Amendment Institute at Columbia University, said while there isn’t any evidence that Twitter eased restrictions on conservatives’ accounts after the Musk deal was finalized, their comments highlight a larger transparency problem.

“Many people on all sides of political spectrum have been concerned,” she said. “There’s this nub of truth to it that we don’t have any idea of what’s going on.”

Read the Article on The Washington Post
Shopping Basket