Early in the development of Hitchcock’s film, The Birds, Melanie meets Mitch who covertly flirts with Melanie by displaying dominance he holds over Melanie being that he knows more about Melanie than she does him. In this scene, Melani is faking her knowledge of birds in contrast to Mitch who knows her identity and therefore also knows of her lack of knowledge. Towards the end of their interaction, he says, “Get back in your cage, Melanie”. Revealing that he knows of her identity. This reveal of knowledge combined with the statement commanding a woman to get back in their cages shows us how men are allowed to gaze and observe therefore are allowed to gain knowledge while women remain in the dark. We see how women’s lack of knowledge and Man’s knowledge produces and maintains masculine dominance in a heteropatriarchal society.

In Alfred Hitchcock’s Psycho, the drain into which Marion Crane’s blood goes down after being murdered by Norman Bates who is notoriously afraid of filth represents Hitchcock’s philosophy that what lies inside every human is dark and dirty. This juxtaposition of brutality and gore with Marion’s attempt to purify her body and mind of her sexual urges tells us that in the end, all people return to that of the dirt. The drain itself with its depth made uncalculatable by its darkness shows us how not only how humans return to the dirt but also how humans have the compulsory need to hide and throw away the waste-like qualities within us.

In the opening credits of Alfred Hitchcock’s film, North By Northwest, Hitchcock already gives us a visual representation of the facade of masculinity and its connotation of naturalness. The opening credits read out the title North By Northwest along with directional iconography that resembles an erection as well the Mars symbol of the male sex. The title then fades into a close-up of the glass of the building reflecting the bustling city in which Roger lives. In this shot we are not seeing the city, we are only seeing an image of a reflection of the city. Therefore, we are also seeing a representation of how Roger and every other man is an identity that is not real or natural within itself but a presentation that, like an image, is projected onto men. With this image, we are seeing how every man under a heteropatriarchal society creates his masculinity, becomes a man, and acquires authority by mimicking other men and performing male-gendered acts.

From Alfred Hitchcock’s film, In this single shot, we see the trunk of a giant tree whose phallic shape overpowers the rest of the objects in the space. The tree’s fantastic size is an embodiment of the fantastic realm of the dream state which is the result of the information we receive during our daily lives. The tree manifests as an overpowering presence because as it is phallic it also represents the which means the tree also symbolizes masculine anxiety that lies within the male subconscious and majorly impacts male actions. It also makes a larger point that we are all haunted by the logic of heteropatriarchy. We are all beholden to the logic of patriacrchy whether we are consciously aware of it or not. Even if we are acting in rebellion or critique of heteropatriarchy we still need heteropatriarchy to begin with. We are in a codependent relationship that is inescapable because similar to how the characteristics of a woman or a queer individual are the opposite of the heterosexual male, the phallus is also kept and maintained by acting in opposition to woman and queerness.

Furthermore, it is significant that Hitchcock chooses a tree specifically to exemplify this phenomenon of inescapable heteropatriarchy because a tree maintains itself by spreading roots under the surface of the ground similar to how the production of masculine anxiety is reliant on the mass reenactment of patriarchal ideology as a result of the subconscious that absorbs everything.

Disregarding how Alferad Hitchcock’s film, The Man Who Knew Too Much is xenophobic and Islamophobic we see that the film is quite similar to Hitchcock’s film 39 Steps. We see this similarity with the record player that emits the crashing tone that will hide the gun shot is a physical stand-in for the use of propaganda by governments during wartime. The physicality of the record player reminds us that we are constantly influenced by manipulated information that is fed to us as civilians. The record player shows the audience exactly how propaganda functions in media as a means to provoke the acceptance of war with its technically harmless purpose of entertainment that hides violent actions.

By listening to the dialogue from the film, Rear Window, it is clear that the director, Alfred Hitchcock wants the audience to take notice of how the power of being the owner of the patriarchal gaze as opposed to being a woman that is surveilled comes at the cost of knowing the evils it it has done and is capable of. For example, the character Stella says “Intelligence, nothing has caused the human race more trouble than so much trouble as seeing and reading.” This piece of dialogue is communicating to the audience that too much knowledge stifles a man’s ability to be happy because seeing causes introspection which forces heteropatriarchal thought to question its morals and logic.

In “Strangers on a Train,” criss crossing as visually represented with train tracks represents the “X” which symbolizes absence and can function as a symbol to mark the spot of treasure. The multiple ways to interpret the presence of a criss cross is within itself a criss cross because of the duality of the criss cross.

This duality suggests that there is a multiplicity of ways to construct morality. Morals are often spoken about in black and white terms, but when there is a criss cross these lines become convoluted producing a grey area of choices that cannot be separated from one another.

A criss cross also implies an interruption of routine heterosexuality. As a character queered by his flamboyant style and murderous streak, Bruno is also a person who often crosses the line of morality. Bruno

In Alfred Hitchcock’s film “Rope” the consistent mention of astrology paired with candles that sit atop the chest holding David’s corpse. “She’s the Virgo type, like all these… you know” is said by Mrs. Attwater as she stands over the chest lit by candles. Brandon puts these candles here to signify the momentous occasion of David’s murder and to put the finishing touches on his “work of art.” The consistency of this language and pairing “ropes” the audience into a logic rooted in superstition. In doing so, we see the space in which Brandon and Philip commit murder as an unholy place tainted with superstitious values that are the inverted twin of Christianity. I say the inverted twin of Christianity because Christianity and astrology are the same in the way they cultivate a group of followers that believe in the presentation of pseudoscience or mythical stories as law and fact. Furthermore, astrology is supposed to uncover both what a person presents to the world and what is invisible to the world as it explains a person’s consciousness and unconsciousness. Astrology also examines what we, at our core desire, personality characteristics, and concepts we feel pressured by. In this film, the subject of Astrology is used to show us there is something hidden and sinful about the space as a representation of homosexual anxiety caused by heteronormativity, This anxiety is the impetus of murder both in the literal sense and the metaphorical. The murdering of the queered self is a ritualistic killing by which a man redeems and cleanses himself of sin and separates himself from his core desires. 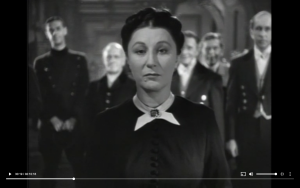 Welcome to sites.tufts.edu. This is your first post. Edit or

In this still shot, taken from Mrs. Danvers’s introduction scene, we see at the forefront of the image Mrs. Danvers staring into the audience with a stone cold emotionless facial expression. Her stillness emits dominant energy that frightens Mrs. De Winter. In the background, there are blurred figures of Male house workers standing directly behind Mrs. Danvers. While Mrs. Danvers is the easiest figure to see and register as the conductor or guard of forceful dominance, she is actually both a product and an executor of male desire to master masculinity. This works perfectly well to emphasize Hitchcock’s obsession in displaying what is present but unseen and what is seen but not realized consciously.

Mrs. Danver’s character functions as a representation of female reenactment of patriarchal abuse by the woman onto the fellow woman. This is a theme that is continuously represented through Mrs. De Winter’s relationship with Mrs. Danvers. Mrs. Danvers essentially serves as the grader of Mr. De Winter’s mastery of womanhood and sexuality, an accomplishment that Rebecca has achieved in her 36 years of practicing the acts of womanhood while refusing castration. Although an adult woman is not what Maximum wants, Mrs. De Winter still must teach herself how to be like Rebecca and act in the mature ways she does. Just as Rebecca holds Mrs. De Winter hostage with her haunting intangible presence, Mrs.Danvers holds Mrs. De winter hostage with her physical surveillance and tricks that humiliate Mrs. De Winter.

From the layering of the figures in this shot, it could be read that Mrs. Danvers serves to represent the essentialized combat between women. With this, there is an emergence of a sort of maternal version of the Oedipus complex where Mrs. De Winter is both fixated on replacing Rebecca as the sexual maternal figure of the house and also being constantly infantilized by Maximum.

Within this relationship dynamic, there is a paradox of patriarchal rules of femininity that seek to give men the satisfaction of re-asserting dominance in the case that a woman attempts to refuse castration. In other words, men crave for women to rebel and so that they may teach them the correct way of behaving. They crave to discipline their wives so that they may fulfill their parental desires. Mrs. Danvers mimics the male need to fetishize women’s beauty and the performance of parental discipline.

delete it, then start blogging!