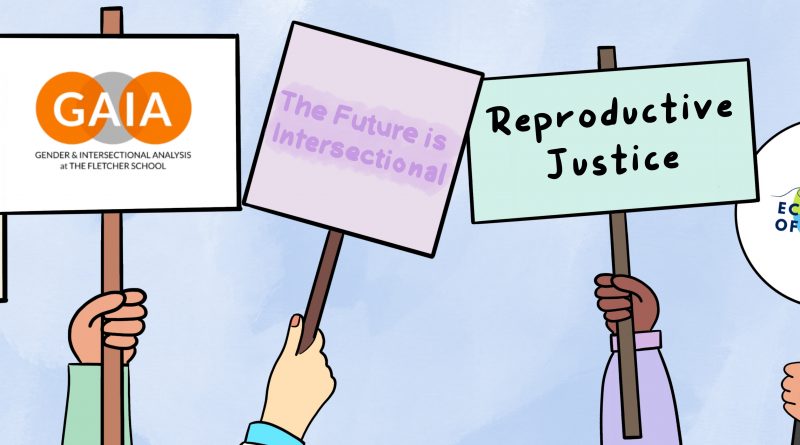 The first in a new series of commentaries on the intersectional harms following from the U.S Supreme Court overturn of Roe v. Wade, this article from Maria Paola Silva (MALD 2022J) examines rage and resistance in the context of organizing across state lines and national identities.

If you are interested in contributing an article of 500-1,000 words to this series, please write to <gaia@tufts.edu>.

I have more rights in Colombia than in the United States

As a Colombian-American, I have always looked up to the United States of America as the land of freedom and where I would always feel safe. Never in a million years did I think my liberty and autonomy would be guaranteed in Colombia but not in the U.S. In Colombia, women, non-binary people, and trans men are free to opt for an abortion until 24 weeks of pregnancy, and they are also free to do so if their pregnancy is the result of rape, if there are indications of life-threatening fetus malformation, or if there are threats to their health. Today, in the United States, that freedom is no longer the reality for most women and pregnant people.

Since Friday, women, non-binary people, and trans men in the United States are no longer guaranteed the right to autonomy over their own bodies. The Supreme Court’s decision to overturn the 50-year-old Roe vs. Wade decision confirmed that I am neither free nor safe in the United States. As a woman, I am a second hand-citizen, and I cannot make decisions over my own body. It’s hard to reason that the state can take away constitutionally-granted rights when the struggle to guarantee them took decades. It’s hard to claim that the “most democratic,” the “most developed” country in the world cannot guarantee its population the right to choose what happens to their own bodies.

Heartbroken doesn’t even start to cover the despair my body felt while listening to the news. And then the rage, oh, all the anger! Rage is as reasonable as a response can get when your rights are taken away. As a person advocating feminism, I am enraged by the many times people state that our movement is not important, by the many times they tell us to “calm down” because we already have rights. When the truth is that for me, as a feminist woman, my life will not be about celebrating rights but about defending them. And sometimes, it is truly exhausting.

According to Planned Parenthood, this Supreme Court decision will affect 36 million people of reproductive age. The truth is, abortions will not be reduced just because they are criminalized. What is going to happen is that safe abortions might disappear in many states, and many persons seeking them will die by getting their abortions under unsafe conditions. Criminalizing abortion violates the fundamental rights of women and all people who can bear a child: the right to autonomy, liberty, health, and equality. Criminalizing abortion forces children to go to jail if they are raped. Children in the U.S. can access weapons but not abortion if they are raped. Criminalization also makes life more challenging if you want and need an abortion. Many economically marginalized women, non-binary people, and trans men — especially those who are also BIPOC — will have more difficulty having a safe abortion.

I have heard many times on social media that if I want a safe abortion, then I can just move and have it in another state. Or, abstinence is mentioned as an option. This infuriates me because it affects all people who need an abortion. (Never mind the cost, the time, and the lack of a proper health system in this country!) It also affects women, non-binary people, and trans men who cannot travel to another state for economic reasons or because their work does not allow it. Women serving in the military, for example, cannot simply change states. They must serve where they are and cannot merely move for a procedure.

Why does all responsibility fall upon the person with a womb? Why, if we can only get pregnant once a year, do we have to bear sole responsibility of contraception? Why should women, non-binary people, and trans men give up their autonomy and liberty to protect an unborn fetus?

The overturning of Roe vs. Wade is a blatant attempt to undermine freedom and development. Thinking of the spillover effects makes me sick. Consequences such as the reconsideration of the protection of contraception, same-sex relationships, and same-sex marriage is a possibility. I am not scared – I am terrified.

The argument against abortion is usually to “save lives” or “save the children,” but what lives are being saved when women, non-binary people, and trans men have no right to make decisions about their own bodies? What lives are saved when you give birth but there is no baby formula on the shelves? What lives will be saved if you cannot even get proper health care once you are born? What lives will be saved if the U.S. is one of the “developed” countries with the highest maternal mortality rates?

What We Learn from Feminist in Latin America

Although many of us are reeling in the wake of the Supreme Court decision, I know our rage and sadness can be transformed into action. I was part of the movement Causa Justa that decriminalized abortion in Colombia. I want to share with you five lessons I learned from my experience there, in the hope that they might be useful to win back the right to choose in the U.S.

First, mobilize and get engaged politically. Go to the street, and make your voice heard. Don’t back off from making people uncomfortable in an effort to make politicians listen. In Colombia, we won the right to legal abortion despite politicians’ efforts to take that right away. Politicians can be forced to listen.  Today, because of women’s mobilization and votes, Colombia has the first leftist government in decades that will help eliminate the barriers to proper reproductive health.

Second, symbols matter, and they can move masses. Symbols allow those who want to be part of the movement to join and identify. As Colombians, we inherited the pañuelo verde from our Argentinian sisters. Today it is a symbol for feminists in Latin America an represent the freedom to choose and have autonomy. Wear green.

Third, you can only build a freedom movement if EVERYONE is included. The conversations we have and the meetings we plan must reflect diversity. People with disabilities, LGBTIQ, BIPOC, and economically vulnerable people have an important role in the conversation. Cities are not the only places where women, non-binary people, and trans men are affected: think of how to include small towns and rural areas in the movement. Think about the way to support them and assure they feel welcomed in the movement. A community can only be achieved if we make an effort to include everyone.

Fourth, support your local collectives and organizations and listen to them. The pro-choice organizations work daily to help women, non-binary people, and trans men exercise their right to choose, giving important information on how the movement should contribute and where it should move. Listen and learn.

Finally, do not put yourself in danger. Self-preservation is first. If starting the conversation in very conservative communities puts your life at risk, find a community online and take care of yourself first.

Organizations like Plan Parenthood support women in their contraceptive decisions, including abortion in the U.S. If you need an abortion, help is available to ensure you get the care you need. Call 1-800-230-PLAN or visit http://AbortionFinder.org. Additionally, if you need to travel to get an abortion, The Brigid Alliance provides support at https://brigidalliance.org.

@dipali17 has an edited volume out and this thread breaks down each chapter for easy review. Check it out! https://twitter.com/fletchergender/status/1617555152818282500

Ch 14: Moving Beyond Rwanda's Children of Bad Memory - @dipali17 and Samuel Munderere
-- Explores the role of support groups for mothers and children as a meaningful way to address disclosure and trauma

Add #ChallengingConceptions to your TBR or ask your library to get a copy today!

Ch 8: Triptych: Children Born of Wartime Rape - @BridgetKConley
-- examines photos of #CBOW and distinguishes how the photographs ask the public to define themselves