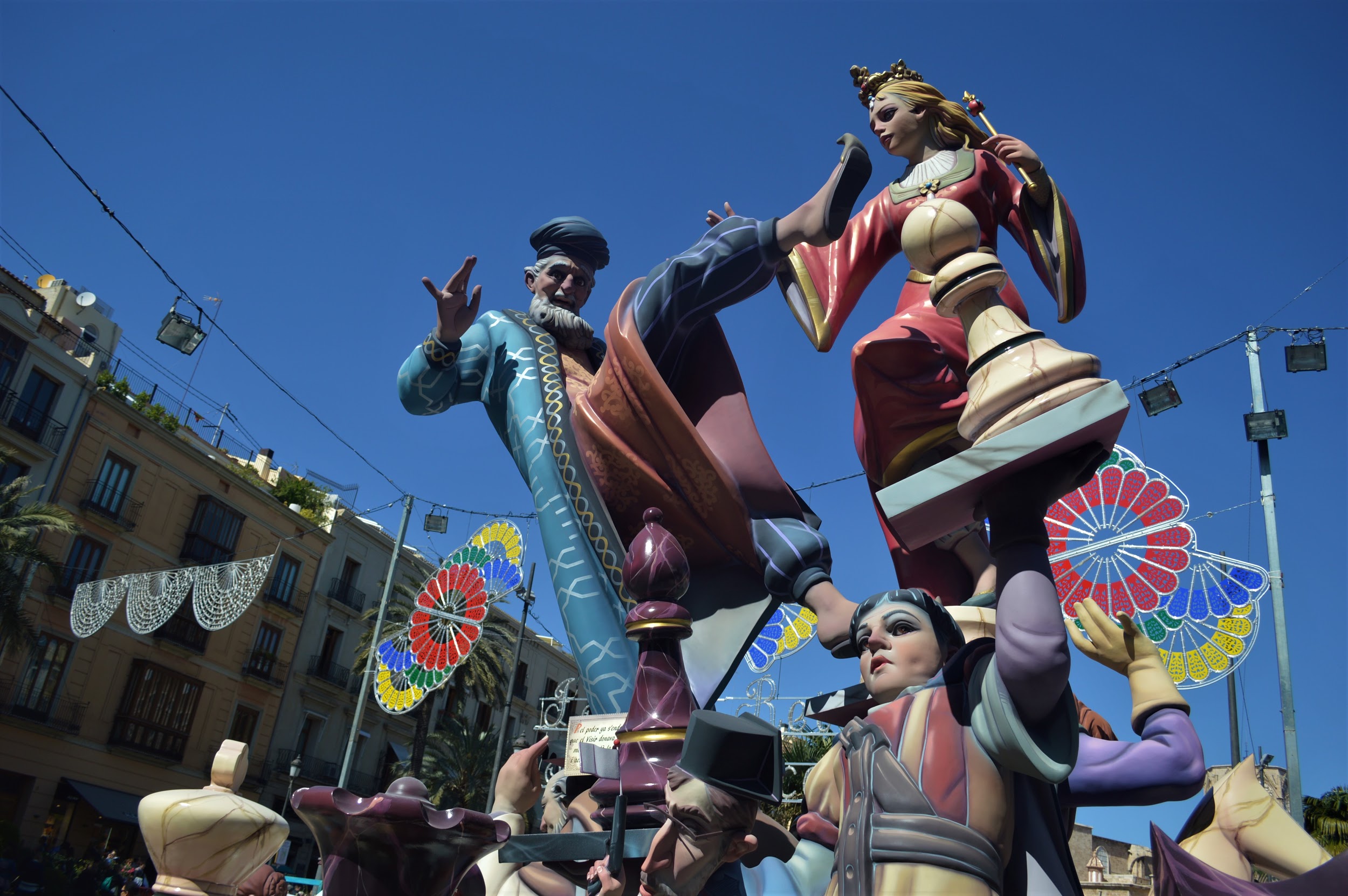 Two weeks ago, Valencia celebrated their world famous Fallas/Falles festival. I, along with my friend from back home, Eddie, headed to Valencia to partake in the celebrations. We stayed with Carmen, a friend of mine studying in Valencia, and her roommates who also invited a number of their friends. Thanks to Carmen, and her friends, Eddie and I were able to enjoy Falles through a somewhat local perspective; although they are not from Valencia, they have now lived and studied there for several years. Falles felt like a kick start to the last two months of my time in Spain, providing a spark that made March fly by, leaving me and my fellow fellows, trying to fill every weekend, day, and minute with a meaningful and new experience.

Falles was, like most European festivals, a pagan ritual that celebrated the spring equinox and was later converted into a Christian celebration. Falles now coincides with the day of Saint Joseph, the patron saint of carpenters. Falles has become Valencia’s most important and celebrated festival, attracting young people from across Spain and the world to participate. The main attraction of Falles, is the massive cartoonish doll structures that go by the name of the festival itself. Each neighborhood has their own falla that sits in a major street or intersection, along with tents serving food and drink to members of that community. Each neighborhood also has a procession with girls and boys of all ages dressed in traditional Fallera clothing and accompanied by a marching band. This neighborhood setup to the festival allows for neighborhood bonding as well as friendly competitiveness between rival neighborhoods.

The festival of Falles lasts one week but is truly a yearlong cyclical process. Every year the new Falles season starts in the weeks after the actual festival comes to an end with planning and design for next year’s falles. Each neighborhood hires an artist/carpenter to design, and oversee the construction and setup of these structures. Besides providing a year round job for many artists, this long process symbolizes the underlying theme of Falles.

On the last day of Falles, at midnight and into the early morning, each neighborhood lights their falla on fire using firecrackers and gunpowder. In a matter of minutes, these immense pieces of art, are burnt to the ground in a fiery and explosive display. Photos from the hills to the outskirts of the city are able to capture this event every year, making Valencia look like one of those animated models of ancient cities as they are set ablaze in a siege or uprising. This event, ‘La Cremá’, besides definitively confirming Valencianos and Spaniards fascination with fire and gunpowder, also illustrates the cycle of this festival and the unique way Spaniards view life itself.

According to my father, the French, who stereo typically spend their time drinking Bordeaux and discussing philosophy, still jealously say that the Spanish live twice. After living in Spain now for 7 months, having attended many festivals, enjoyed many long weekend lunches, taken one too many siestas, and been out to enjoy Spain’s tapas culture, I can confirm this assertion. It may be the Mediterranean culture and climate that dominates much of the country, the abundance of good food and wine, or Spain’s history that includes its rapid fall from imperial giants to one of the most underdeveloped European countries at the turn of the 20th century, but Spaniards tend to have a cynical yet relaxed view on life and death. I will not go as far to say that there is no fear of death, but it seems that in Spain, and much of Latin America where Spanish influence runs deep, death is an accepted and awaited end, allowing Spaniards to enjoy and accept life for what it is and live in the present. Falles in this sense is a yearlong process with a long, yet fundamental process that all culminates in preparation for one week of celebration and excess finishing in a fiery, and violent, yet calming and bittersweet Cremá.

One day as we shared delicious paella and good conversation in a beautiful terrace in the center, Carmen mentioned a saying I had not heard before, “La vida es una lenteja, o la tomas, o la dejas”, translating to “life is a lentil, you either take it, or leave it”. Although it sounds weird in English, in Spanish it defends itself as it rhymes and lentils are a very common food. Although the saying is silly, it does relate to my experience in Spain. I have had my bad moments, my mundane moments, and my exhilarating ones, but I have learned to try and accept life at face value and enjoy it while I can.

My volunteer experience, although it may understandably, not be among the most exciting things that I have done this year, has provided a fundamental basis that gives my life here a defined purpose, much like the preparations for Falles. My travels, festivals and holidays, lunches and dinners with family and friends, concerts, fútbol matches, and other unforgettable moments, can all be considered my week of Falles celebrations. With only two action-packed months left, I haven’t quite come to the Sunday of la Cremá, but I can definitely see it right around the corner. Leaving will be no less heart wrenching or fiery than when I had to leave Ecuador, but I hope this time, with Carmen’s ‘la vida es una lenteja’ saying, and way of viewing life that I will more easily accept the end and be able to move on to the next period of my life at Tufts, much like Valencianos do as they clean up the ashes of La Cremá and step into the next season of their sacred Falles.