The idea for a downtown government building complex in Boston dates back to the early twentieth century. In the 1950s the urgency, will, and resources for such a project came together to produce Government Center.

The historical backstory of Government Center was Boston’s economic fall, caused by the collapse of the state’s manufacturing sector, which reached precipitous levels after World War II, as chapters 2 and 3 of this website detail.

Dropping population, poverty, physical decay, and the flight to the suburbs impelled Boston political and business leaders to dramatic action to reverse the city’s long-term decline. Using newly available federal urban renewal dollars, the state and city worked together to empower the Boston Redevelopment Authority, led by Ed Logue, to redevelop the old Scollay Square area. Chapter 4 of this website details the cast of characters who brought Government Center into being. 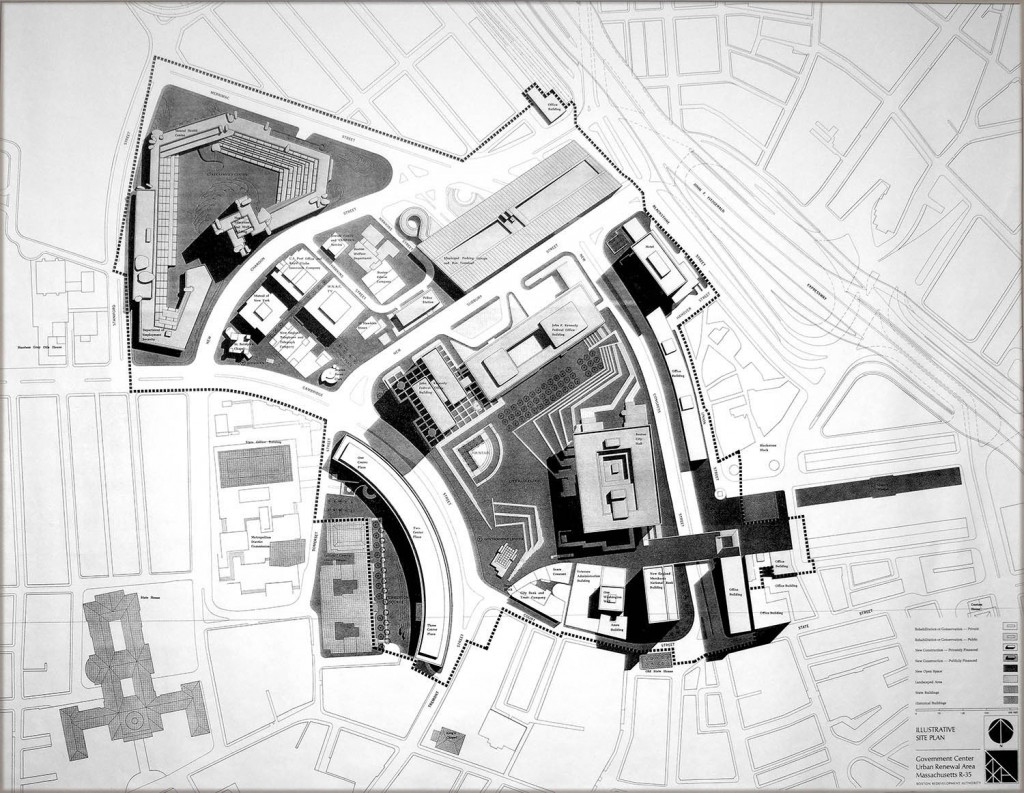 The first step was to produce a master plan  that would divide the dozens of acres in the site into separate parcels with designated purposes, for government, business, open space, and other uses.   The New York-based firm of I.M. Pei, then at the beginning of his career, laid out the master plan in the later 1950s and early 1960s that largely determined the shape of Government Center’s buildings and open areas (above).   Chapter 5 of this website traces the development of the master plan. 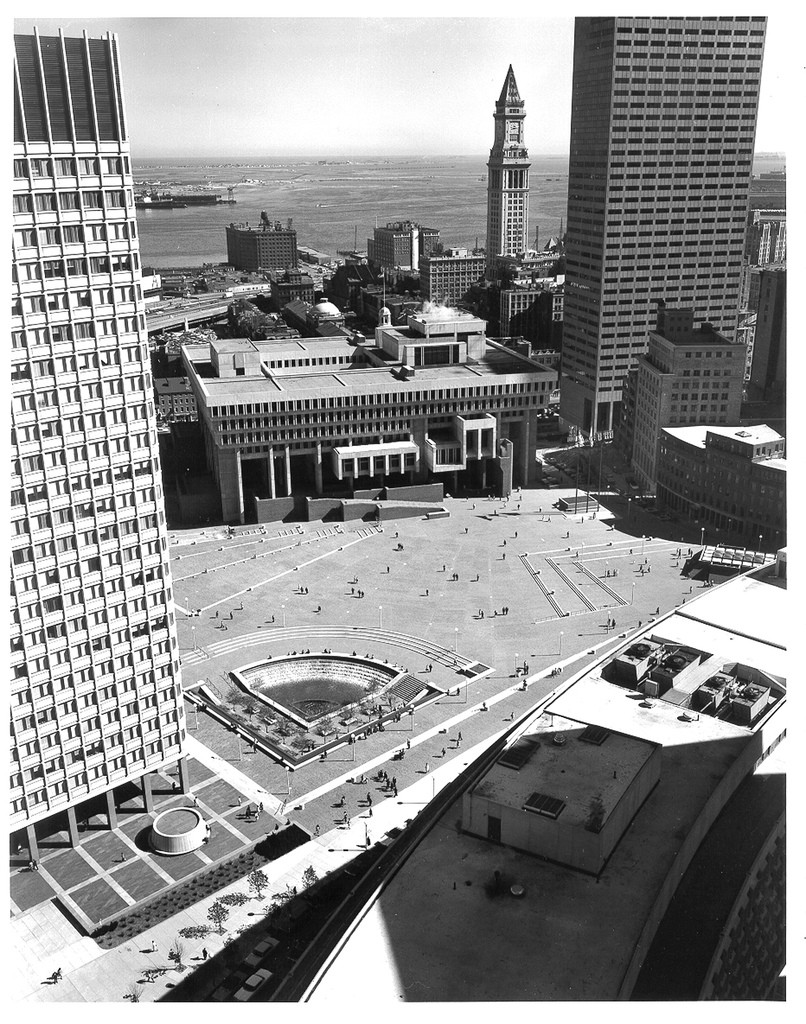 The job of filling in Pei’s plan with buildings was divided between several other architects’ offices. Most notably, the young firm of Kallman, McKinnell & Knowles won an international competition to design Boston City Hall (above, center). The famous German emigré architect Walter Gropius’s firm, The Architects Collaborative, gained the commission for the Kennedy Federal Building tower complex next to City Hall (above, left). And down Cambridge Street, Paul Rudolph was the guiding hand behind the State Services Center (below, center). Other notable buildings includes the Government Center garage, also by Kallmann, McKinnell & Knowles (below, upper right), and the low curved office complex of One Center Plaza, by Welton Beckett, across from City Hall (above, foreground). 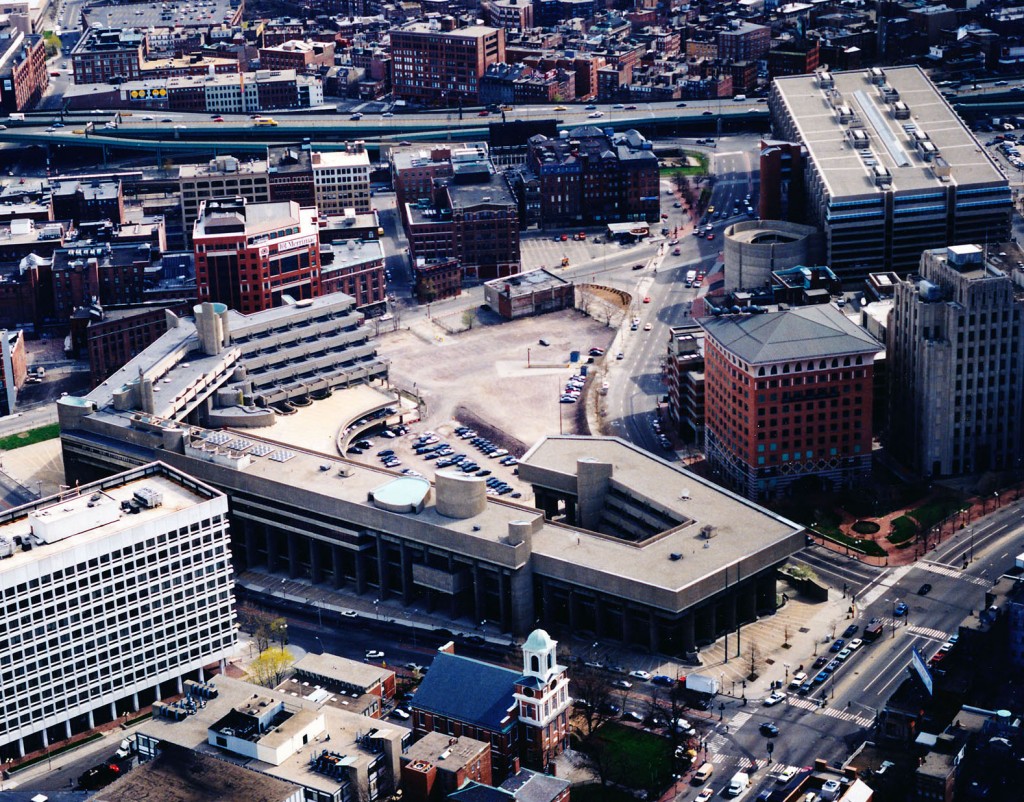 Though praised at the beginning, Government Center over time has had mixed reviews. Chapters 6 and 7 of this website explore reasons why some parts of the Government Center have worked, and why some haven’t. Widespread use of concrete has often been blamed for Government Center’s alienating character. Chapter 8 looks closely at how concrete is actually used in the area. At points, Government Center is enlivened with art, including some notable sculpture, painting, and murals — the subject of Chapter 9. How people today perceive Government Center is the subject of a survey in Chapter 10, whose results are interpreted graphically in a series of original drawings. Lastly, Chapter 11 brings together many of the past and present visions people have had for Government Center, both how it was realized and how people have wished to change it.  The final two chapters of the website contain a gallery of images curated by the seminar’s students, and section for further reading.

The hope of this website is that you, too, will see ways forward for Government Center, based on what you can learn here the area’s history, architecture, and existing qualities, both good and bad.