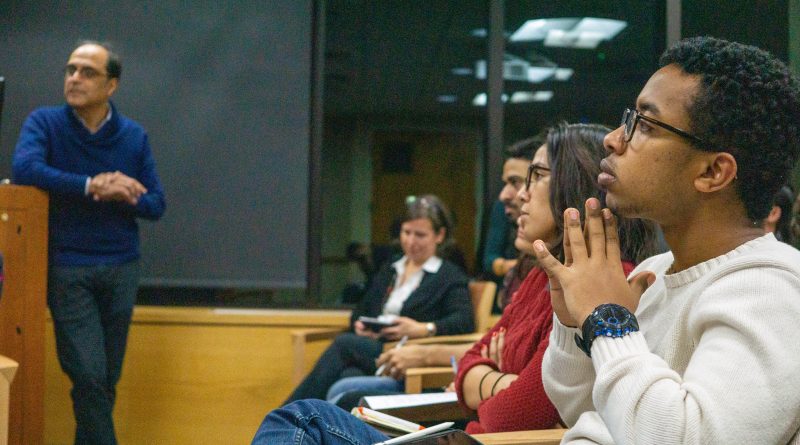 In the Fall of 2019, IBGC hosted a panel of three distinguished Fletcher faculty members — Professor Eileen Babbitt, Professor Laurent Jaques, and Professor Jeswald Salacuse — and two visiting speakers, Stephen Park, Professor of Business Law and Corporate Social Responsibility at the University of Connecticut, and Rachel Bass, Fletcher Alumna and Research Manager at The Global Impact Investing Network. With Dean Bhaskar Chakravorti moderating the event, the panel discussed an important question that has been on the minds of business people across the globe for years: can serving stakeholders redeem or ruin capitalism?

Professor Salacuse opened the discussion by raising a fundamental question: what is the core purpose of corporations? At first, the question may seem obvious, but in reality that couldn’t be further from the truth. He continued by explaining the two major models of corporate governance, the “shareholder model” and a “stakeholder model”. The shareholder model has dominated the public sector in the US for decades while the stakeholder model continues to gain momentum across Europe. Professor Salacuse explained that while US corporations have historically favored the shareholder model, times are changing and with it a new era of corporate governance is rising to the surface. The push for greater gender equality and growing interests in environmental activism have helped realign perspectives on how organizations should operate and who they should focus their attention on.

Rebutting this notion was Professor Laurent Jacques, who asked why stakeholder capitalism has suddenly become so popular, especially in the United States. To him, this points to a larger underlying issue regarding a lack of effective social and environmental policies, some of which are unrelated to the activities of private enterprises. He also mentioned that with stakeholder capitalism comes a challenging decision: which objectives do we privilege and why? Do companies favor unionized or non-unionized needs? Which markets, specifically, should these companies spend more energy on? They are difficult questions to navigate, but Professor Jacques proposed a potential solution. According to him, stakeholder capitalism is only effective if a robust team of impact investors are willing to blacklist companies that fail to serve stakeholders. He closed his rebuttal by reaffirming his desire for good old fashioned policy that adjusts cash flows and empowers the working class.

Professor Eilleen Babbitt then weighed in with her thoughts. She explained that while it’s unknown whether or not corporations will actually value stakeholders, many companies have gone on record saying they will value social change and implement more inclusive policies that empower stakeholders. Take for example Johnson & Johnson, who’ve publicly stated that their first responsibility is to ensure healthcare professionals are equipped with effective, safe, and reliable medical supplies. The company’s decisiveness has proven to be effective and several other large organizations have followed suit by ensuring safety at the workplace, running honest marketing campaigns, giving back to local communities, and fighting against climate change.

Stephen Park, Professor of Business Law and corporate social responsibility, was eager to join the conversation. He suggested that the rising power of ESGs and corporate social responsibility have helped pave the way for stakeholder capitalism. Supporting this claim are rapidly changing consumer behaviors, which show that most people make buying decisions based on how closely a company’s values align with their own. While Professor Park seemed encouraged by the changing winds in corporate governance, he held a practical stance, explaining how complicated and time-consuming corporate accountability often is. He explained that balancing the needs of several different stakeholders is extremely difficult and, in some cases, impossible depending on the company’s ability to take on such projects. In the end Professor Park maintained that while stakeholder capitalism is appealing in many ways, it will doubtlessly involve several significant trade-offs.

The conversation then circled back to Jeswald Salacuse, who explained that the best way to initiate change is to engage in thoughtful dialogue and consideration. To him, questions regarding which form of corporate governance is superior or more effective are fundamentally political. The question then becomes how does one bring about political and sentimental change in respect to corporations, institutional identities that seem detached from the desires and concerns of everyday people. In the end, no matter which form of capitalism reigns supreme, political and legal change is a slow, often exhausting, battle. Fortunately, Salacuse holds onto the hope that the verve and ambition of younger generations will bring about change at an exceptionally quick pace.

Professor Babbitt then turned her attention to CEOs and explained that many argue this is all too complicated for a CEO to manage. Babbitt is quick to express her contempt at such excuses, claiming that it isn’t too complicated and is, in fact, a vital part of a CEOs responsibility and duty to his or her company. CEOs in the past tended to keep quiet about social issues and stakeholder capitalism in general. However, the forceful wave of social justice movements have disrupted this normality. Now more than ever before CEOs are speaking up about issues that matter not only to them, but to the people they do business with. Corporate executives are becoming increasingly comfortable with using their authority as a platform for social good and change. Professor Babbitt claims that businesses that invest in social responsibility often see considerable returns on investment. This in and of itself is a compelling incentive for any CEO.

At this point in the conversation, the audience turned their attention to Rachel Bass, Fletcher Alumna and Research Manager at The Global Impact Investing Network, one of the leading organizations in corporate social responsibility. When it comes down to the future of capitalism, Rachel considers herself a cautious optimist. She stated that there is a common assumption that accounting for the needs and realities of stakeholders necessitates a financial trade-off, but this isn’t the case in many instances. Reaffirming what was said earlier by Eileen Babbitt, Rachel suggested that a company can see huge financial benefits from engaging in social good and by working to help the environment. To support her claim, she pointed to several examples of such cases. The first was “Gender lens” investments, which show an upswing in resources and investment opportunities for marginalized and disenfranchised groups of people. Additionally, a third of investors today engage in impact investing because they feel financially attracted to such opportunities. Despite the supposed obstacles involved in stakeholder capitalism, Rachel remained optimistic that the potential of stakeholder capitalism will only increase in the coming years.

As per tradition of Fletcher Reads the Newspaper, Dean Bhaskar Chakravorti closed the event by asking the students in attendance to think critically about the future of businesses around the world and consider the ways they would go about serving either shareholders or stakeholders if they were CEOs of large corporations. Students were eager to express their ideas, some proposing maintaining more diversity in upper management, giving back to the communities that companies operate in, and restructuring business practices to value inclusion above all else.