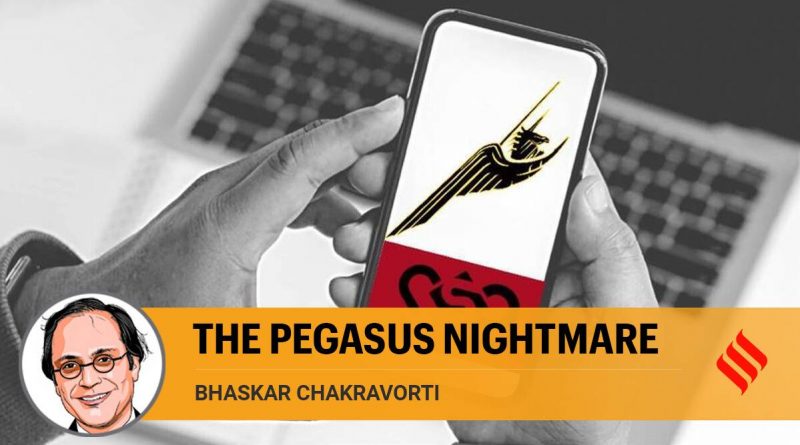 Excerpt from “The Pegasus expose shows that time has come for trans-national treaties to stall surveillance by rogue governments and corporations”, Bhaskar Chakravorti, Indian Express

Oh come on. Rahul Gandhi should not be quite so shocked by Pegasusgate. He changes his phone every few months, I am told. I’d be willing to bet that this is not because of an addiction to iPhone upgrades. Now, as a member of the Pegasus club, he rides that winged horse of Greek myths in distinguished company, from multiple heads of state to at least one king. Not bad for someone with no official administrative title. Yes, yes, I know the Pegasus club also admits the hoi polloi — hapless journalists, dissidents, friends of a princess, but not the princess, and even someone who had the audacity to accuse a former Chief Justice of India of sexual harassment. Even if it is an operative in the home ministry, there is someone who cares about Mr Gandhi. In a world where attention is the greatest currency, that must mean something.

Mind you, I do not wish to make light of his predicament. Pegasus is a scary piece of spyware, especially so for the hoi polloi who make it their job to not get attention and prefer to direct attention towards the dismantling of democracy. The Pegasus exposé should not make any of us feel comfortable about the current unsteady dance between living digitally and living in democracies. The Israeli company, NSO, responsible for this beast, which can get your phone to record and share your every move with a spook, says its clients are all “fully vetted governments”.

You never know with fully vetted governments these days. Something tells me that the vetting of the Indian government was done when former Israeli prime minister Benjamin Netanyahu and India’s Narendra Modi were wetting their feet in the Mediterranean Sea during the 2017 Modi visit. But the Indian government neither acknowledges nor denies that it is an NSO client.

Where do we go from here? In the near-term, Rahul Gandhi’s high-frequency phone swapping may be impractical for most of us. Mamata Banerjee’s putting “plaster” on the phone may be a cheaper fix. But we need better longer-term solutions to sleep more soundly.