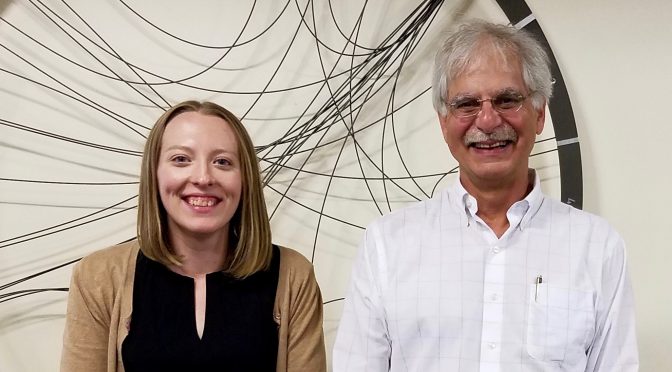 Not all experiments at The Jackson Laboratory take five years to complete. But one day last month, a group of JAX scientists gathered to see the results of a five-year experiment. The presentation by Tufts University Genetics Program student, Elisabeth (Liz) Adkins, described a newly defined cell in the immune system, a cell that when multiplied excessively could contribute to autoimmune diseases such as lupus or rheumatoid arthritis. But the five-year experiment was even bigger than Liz’s newly defined cells. The other experiment was Sackler’s collaborative partnership with The Jackson Laboratory, and it had yielded measurable success: Liz is its first Ph.D. graduate!

A little over five years ago, the Sackler School and JAX created a new graduate program, the “JAX Track,” that would allow students to enroll with the explicit intent of conducting their thesis research at JAX. Located in Bar Harbor, Maine, The Jackson Laboratory is a world-renowned institution where mammalian genetics is at the forefront of research. JAX hosts Ph.D. students from universities in the US and abroad during some portion of their thesis research.

Tufts JAX Track students might be drawn to JAX because of the laboratory’s history and reputation in mouse genetics, or they might have been at JAX as a summer student and fallen in love with the place, or they might have been told about the resources and community from a mentor who had valued their own time at JAX. But the question, five years ago, that faced JAX and the Sackler School was: were there students who wanted a uniquely JAX experience during their Ph.D.? And would it work? Together, Sackler and JAX faculty thought they had the right ingredients: a strong translational research group at Tufts and wide strengths in mammalian genetics at JAX. But it took the students, and especially Liz Adkins as the pioneer student, to put it together and meet the high expectations.

Adkins joined the JAX Track on the strong recommendation of her undergraduate mentor, Tom King, who had worked with Eva Eicher at JAX during his scientific training. As Liz said, “I also knew that if I wanted to do mouse research – and I did – that there was no better place in the world to do it than at JAX.” Liz’s graduate school career began in the two months before her Sackler orientation, during which she attended the Short Course in Medical and Experimental Mammalian Genetics and had a short research rotation, both at JAX in Bar Harbor. She then moved to Boston to complete her first semester of coursework at Tufts with the rest of her Genetics cohort before returning to Maine to resume her laboratory rotations. At the end of her first year, Liz joined the research group of JAX professor Derry Roopenian for her thesis research. Roopenian studies autoimmune disorders, pathologies that arise when our body’s immune system starts fighting our body. Adkins wanted to understand the process by which B cells, the immune cells in our bodies that produce antibodies, become corrupted to produce antibodies against our own cells and tissues instead of exclusively against foreign invaders like bacteria or viruses.

As we all know, a Ph.D. requires a lot of work. There are hours and hours in the lab, at the microscope and the cell sorter, and reading papers and trying to figure out why results are different than you thought they would be. Adkins had the added challenge of helping to shape the JAX Track program. Although the Sackler and JAX faculty had a clear vision of the program’s mission and the overall structure, there were challenges along the way that no one anticipated – and which Adkins, initially as the sole student, helped solve. “I knew there would be hiccups helping pilot a new program, but I love a challenge and this was one I was happy to take,” recalled Adkins. “Communication lines are open over the geographical distance separating the two institutions. Faculty at both institutions are pulling together and there is a mutual sense of pride in what we all have accomplished,” added Mary Ann Handel, the JAX Track director in Bar Harbor. Thus today, thanks to the efforts of Liz, other Genetics students, both in the JAX Track and in Boston, and the Sackler and JAX faculty, we can all call the program a success!

Liz Adkins moves on from her successes and outstanding work at Tufts and JAX to a postdoctoral research position, studying basic questions about how stem cells remain immortal. And she will continue to teach, an interest she developed during her time as a Sackler student at JAX. She leaves with a sense of accomplishment – in her research and her life – and appreciation for the JAX Track’s unique scientific environment. “Five years later, I have absolutely no regrets,” said Adkins. “I know it helped shape me into the person and scientist I am today, and I feel extremely well prepared for the future.” So yes, in a very personal way, Liz has shown the JAX Track works!