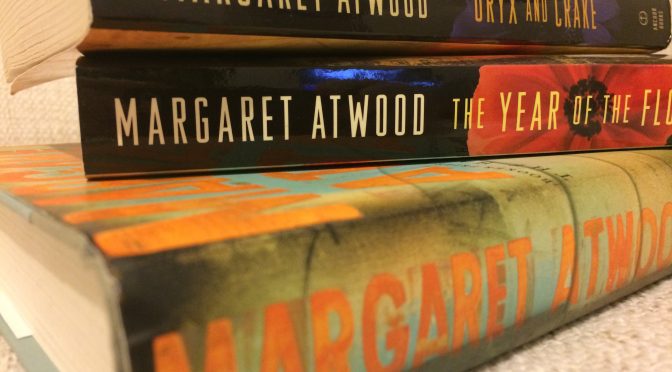 Science, as a subject of study, often comes into conflict with other ways of thinking about the world. Religion. Philosophy. Art. The caricature of science as an opponent to these ‘humanitarian’ endeavors obscures the real relationship: symbiotic. In the case of science and literature, science provides fiction with an intriguing playground to muck around in, while fiction gives science a more human voice. This give-and-take between the two is what makes the genre of science fiction so rich, so enduring, and above all, so entertaining.

Science fiction more often than not uses science as a tool to explore other subject areas versus the science itself. It is not the engineering of the 20,000 Leagues submarine or the bioelectricity behind the monster in Frankenstein that makes these books long-standing members of high school reading lists. Readers are not likely spellbound by Margaret Atwood’s MaddAddam series mainly because of the intricacies of the genetic engineering catastrophe that ended her version of our world. No one likes Star Wars because of its explanations of the physics behind inter-galaxy travel. Fiction is not a mirror that reflects science to readers so that they can understand its most basic aspects. Instead, fiction is a prism that refracts science, fractioning and expanding it into its ripple effects and societal implications. It bends the bleached starkness of the discipline into a million different shades, spattering dark implications and bright hope for humanity in equal measure.

It is not always a fair coloring. Dystopia walks hand-in-hand with science fiction more times than not. Those stories do speak well of the perseverance of the human condition but often at the cost of vilifying some aspect of science. (Everything becomes a villain if left unchecked long enough, after all.) Still, fiction doesn’t just take from science; it gives as well. Science fiction is always ahead of its time, more audacious in imagining what human hands are capable of creating than what we believe is achievable at the time. With that creative inspiration, our history has shown it is inevitable that science fiction becomes science fact, from endeavours as incredible as space travel to tools as mundane as credit cards. And as such, science fiction has the privilege of not just asking can we, but also should we, and it has the added advantage of most times asking it first.

The audacious pushing of boundaries beyond the confines of the contemporary scientific knowledge within science fiction also creates a unique and rich environment for rebellion. Because in that type of story, in an imagined world that both is and is not this real one, what else could be different? Who else could become something more than what they are, or what society tells them they are?

This type of rebellion is what led to the existence of the genre itself. In 1666, the English duchess Margaret Cavendish published The Blazing World, a prose piece often considered one of the first utopian fictions and the precursor to ‘science fiction’ (a term not officially coined until 1926) as we know it today. Cavendish was an anomaly of her time, publishing plays, essays, and prose that tackled philosophy, rhetoric, and fiction, all under her own name instead of anonymously. She also was the first woman to attend a meeting of the Royal Society of London, despite fierce protest, and did not hold back in commenting on and even criticizing the scientific presentations and practices she observed. Her novel dove into discussions tackled by male authors of the time period–the conflict between imagination and reason or philosophy and fiction–but also was groundbreaking in two ways. First, she explored these topical areas within an alternate universe entirely of her own making but one that still used contemporary science of the era; second, her story strikingly centered on herself as the main character, where she traveled in between the two worlds. In a time where women were not considered capable of studying complex topics such as science, the Duchess of Newcastle used her writing to boldly carve herself a space in which she could defy that notion. In the process, she wrote into existence the first examples of many science fiction tropes still widely used today.

Her actions paved the way for other rebels, such as Mary Shelley, the mother of the first science fiction horror novel, Frankenstein. While a grey, depressing summer and a writing challenge born out of boredom provided an opportunity to craft her terror-filled story, her imagination was ultimately sparked after a firelit evening conversation with the controversial Lord Byron about what life is and how to create it. Despite being supported in her endeavours by her companions and her husband, Shelley ran into criticism upon publishing her work–incidentally most strongly from the specific publishers who knew the author was a woman–because it challenged the entrenched ideology of God being the only conceivable creator, not Man (or, in her case, Woman). In the deeply religious society of Victorian England, this was a revolutionary act.

Cavendish and Shelley may have been the some of the first authors to use sciene in fiction to challenge the social and moral status quo, but it was a tradition that persisted in the genre throughout the twentieth century. Starting in the 1960s, female authors were among the first to interrogate the definitions, implications, and biases associated with gender, class, and race. Ursula Le Guin’s sci-fi novel The Left Hand of Darkness–with its gender-fluid alien race dissecting what exactly gender and sex means outside of its Western civilization confines–led the charge. This breakthrough was followed by Joanna Russ’ 1975 matriarchal parallel-universes utopian novel The Female Man, then by Octavia Butler (who was the only African-American woman publishing in the genre at the time) and her late-1980s space trilogy Xenogenesis which explored race in addition to sexuality.

These revolutionary works also represent a broader theme within the genre: the influence of contemporary events of the era in which they were written. Science fiction is as much a reflection on the scientific knowledge of the day–and what could come of it–as it is on the historical and political backdrop of the time. Many early science fiction novels from the eighteenth and nineteenth centuries focus on stories of exploration and the technology that allows journeys into lands unknown. Most notable of these are Gulliver’s Travels (Jonathan Swift, 1726), 20,000 Leagues Under the Sea (Jules Verne, 1870), and The Time Machine (H.G. Wells, 1895). Historically, these centuries were flooded with exploration expeditions by European countries, and later the United States and Russia. While discovery for political and economic gain was the main purpose of most 18th century explorations, those carried out in the 19th century were more focused on deepening knowledge of the world, often through scientific observation and analysis. So, it is little wonder that the science fiction of the era reflected that desire to know more about the surrounding environments.

In the early 20th century, the domination of exploration themes in science fiction gave way to playing around in other subject matters–such as technology, biology, and medicine–which would later become genre staples. The early half of the century was one of rapid scientific advancement as much as it was political upheaval, and the collision of these two jarring phenomenons is reflected in the science fiction of the day. It was during this era that some of the seminal works of the genre were produced, including the post-Bolshevik revolution novel We (Yevgeny Zamyatin, 1924) and the science fiction classics Brave New World (Aldous Huxley, 1932) and 1984 (George Orwell, 1949). These novels each address how uncurbed scientific advances lead to a dystopian political society, and their thematic commonality clearly demonstrates the lasting impact several world wars and fast-paced science had on the public psyche of the time.

While dystopia strongly persisted within science fiction in the middle of the 20th century, the worlds crafted within genre novels did begin to grow a little less dire. As technological development continued to accelerate and started infiltrating daily life in the Western world–thus ‘normalizing’ it–likewise did the role of technology grow in fiction as androids and robots appeared on the genre scene. Authors of the time such as Isaac Asimov and Philip Dick couldn’t help but ask–and then answer through their writing–questions pertaining to the human condition in relation to the (imagined) creation and existence of non-human life. This philosophical bent echoed the early origins of the genre, going all the way back to Cavendish’s precursor work, demonstrating how far the genre had progressed.

Glancing back and paying homage is all well and good, but science fiction also found new ways to move forward at the end of the 20th century. In 1979, The Hitchhiker’s Guide to the Galaxy added a little laughter and good humor to the genre, breaking ground for many others to follow across even until today. The gloom of the war-torn early decades also seemed to have worn off, with a revitalization of the previously ‘tired’ utopian sci-fi tradition by Kim Stanley’s Mars trilogy in the 1990s. This trend of revitalizing and redefining the genre has persisted into recent years, with the semantic alteration by Margaret Atwood, who calls her novels not ‘science’ fiction, but speculative fiction. In her MaddAddam series, she reaches for what might be just possible in the realm of science and society, instead of the complete impossible. In some ways, this approach brings about an even more imaginative (and frightening, and wonderful) vision of what the human mind can create when challenged in the perfectly right and wrong ways.

Ultimately, the fiction of science is as elusive and ever-changing as the real thing. It circles itself: thought and action, can and should, might and will and have done. Whether we as scientists today use science fiction as inspiration–or as a warning–only time will tell.