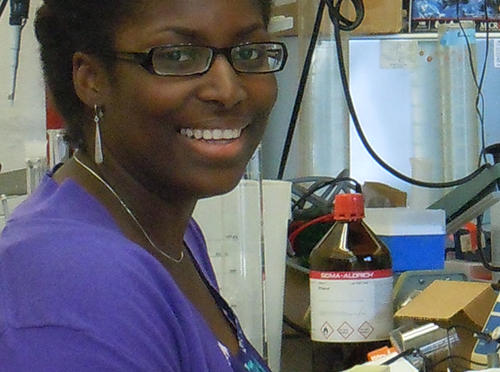 Written by Alyssa DeLeoNEUR. Coffee & Conversation is a series of informal chats with women faculty on campus, hosted by Tufts GWiSE.

Our last Coffee & Conversation of the year featured Dr. Laverne Melón, a post-doctoral fellow in the Maguire lab and a TEACRS scholar. She will joining Wesleyan University as a faculty professor in neuroscience in the Fall. Laverne was born in Trinidad and moved to New York when she was 10 years old. In high school, Laverne helped establish the science club, which she insists was the most poppin’ after school extracurricular at the time, and she knew she wanted to work in research before even knowing what that was. The science club gave her and her peers the chance to support each other in the search for research experiences and ultimately lead her to volunteer in a cancer genetics lab at Columbia University. As she reflects on her first experience in science, she also acknowledges that it was also her first exposure to the sexism and racism that exists in scientific institutions. It’s difficult to turn a blind eye to these situations when all you want to do is put your head down and do the work in front of you. But, she didn’t let this taint her passion for the field and her experiences spoke to her resilience, which would be noted by several scientists later in her career.

Laverne went on to earn a BA in neuroscience at Middlebury College, a MS in Behavioral Neuroscience at Binghamton, and a PhD in Addiction Neuroscience at IUPUI after her lab at Binghamton moved. She lost a Binghamton fellowship in the move and had to teach at IUPUI, which she found frustrating as anyone does when they’re forced to do something. However, Laverne began to enjoy the process and her career path in academia became increasing clear. Laverne has been a post-doc in Jamie Maguire’s lab for the last 4 ½ years studying effects of stress on reproductive health and the role of the GABAergic system in alcohol addiction. As she moved into her post-doctoral years, she was really fueled by a research question which she presented to Jamie along with some data to score her current position. Now, she’s fielding multiple offers for faculty positions and learning to navigate this new part of her career.

As always, we chatted about how early life experiences brought our guests to their current positions, how crucial the role of mentors played in this trajectory, and the vital importance of self-advocacy. But, we kept coming back to this idea of producing good, reproducible science and how that is only possible if the field really cared about the people behind the data. It’s no secret that scientific institutions have not been the best advocates for the health of their workforce. Levecque et al. published a study in May of 2017 reporting one in two PhD students experience psychological distress and 1/3 of graduate students are at risk for a psychiatric disorder. An online survey of graduate students in a recent March 2018 study by Evans et al. reports graduate students are more than six times as likely to experience depression and anxiety compared to the general population. SIX times! It’s exceeding clear that health of scientists across fields and levels are struggling in this environment. This begins by hiring scientists that are more than a good researcher, but are inspired teachers, passionate mentors, and expert managers who are in touch the health of their lab.

As Laverne is beginning the next chapter of her career, she’s considering taking on an administrative position as a director of inclusion and diversity in addition to her faculty appointment. She intends to use her status to implement institutional changes to allow for better science through caring, supporting, and mentoring the next generation of scientists. When Laverne started to work in science, she admitted she tried to assimilate as much as possible, but it gets exhausting. It’s difficult to integrate into establishments and systems that have been hostile to the existence of women and minorities in science while trying to stick it out until you can get to a position to make changes. She’s been able to tap into her mentoring network over the years for support and instructed us to be vulnerable in our insecurities to allow these organic mentorships to grow.