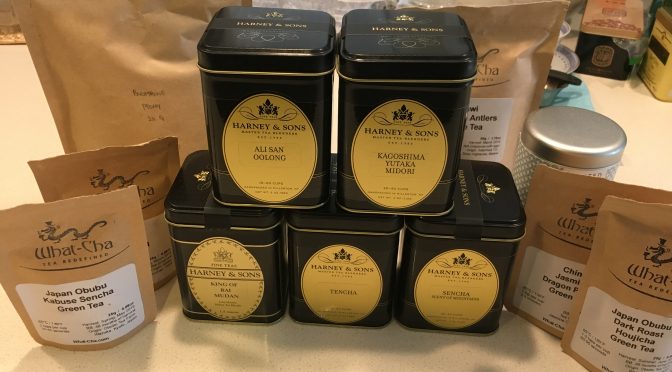 Sorry for the terrible pun, but during these times of stress something that I have found to be very relaxing is to drink a lot more tea during the day than I previously had. While I always enjoyed various black, green, and oolong teas (more on the different types later), I discovered vastly more types and varieties of tea that exist while locked up in my apartment these past two months. Fortunately there are many reputable companies selling tea online, allowing you to get your fix without having to leave the apartment (not like you could anyways). Let’s discuss the different types of teas, their characteristics, and some places that I have gotten really great teas from in the past two months.

The types of tea

Camellia sinensis is the humble plant that has provided humans with tea for thousands of years. Originally drank in ancient China, tea cultivation spread to Japan, India, Southeast Asia, and Africa. The Assam and Darjeeling regions of India produce vast quantities of black tea each year. The Japanese produce almost exclusively green tea, what is known as sencha, which has a distinctive aroma of freshly cut grass and a nice vegetal taste. What makes a green tea different from a black tea? A white compared to an oolong? It comes down to how long the picked leaves are allowed to oxidize before being heated, a process which denatures the enzymes present in the leaves halting the oxidation reaction. As oxidation occurs for longer, the leaves take on a darker color.

White tea: What is considered the most delicate and unprocessed form of tea, white tea usually consists of the earliest leaf buds of the tea plant that are picked and either dried right away or heated before drying. While there is no agreement among the tea growing community, white teas are typically not oxidized or rolled, creating much lighter flavors when brewed.

Green tea: Consisting of many varieties and processing methods, green teas are minimally oxidized and can be heat-inactivated through either steaming (typical of a Japanese sencha) or pan-roasted (common in Chinese green tea). These different methods impart greatly different final flavors and aromas in your cup. Green teas are typically very vegetal and grassy in flavor.

Oolong tea: Halfway between a green tea and a fully-oxidized black tea is oolong (or wulong). These can be either lightly oxidized or closer to fully oxidized. I have come across hundreds of oolong teas while shopping online, and I’m sure there are hundreds more. These are fascinating to me as you can experience so many different flavors and aromas based on where the tea was grown, how much it was oxidized, how it was heated, and the final rolling and drying. Oolongs are best for gongfu style brewing described below.

Black tea: Consisting of fully oxidized leaves, black tea is probably most familiar to Westerners. While produced in many tea growing regions around the world, I believe the majority of black tea is grown in India for the international markets. Most black tea is destined as “dust” for tea bags and large distributers, but there are many full leaf black teas with great flavors that don’t need milk or sugar to make palatable. I do enjoy Twinnings or Taylor’s for bagged breakfast teas, such as Scottish or Irish breakfast.

Pu’er tea: I had not heard of pu’er tea until just recently. This tea is fermented over various periods of time (decades is better) allowing bacteria and various fungi to do what they do best. This imparts complex earthy aromas and flavors from the tea. While I have only tried one pu’er tea that was produced in Malawi, I’m sure there is a rich variety of flavors that can be enjoyed. For me, I think it is more of an acquired taste. The pu’er I had smelled exactly like dirt in a forest, during a large storm, and there were definitely worms and fungus involved. The flavor was mild and not bad, but the smell took some getting used to.

How to brew tea

Each type of tea requires different brewing processes to allow for the optimal flavor extraction without causing the tea to become too bitter from the tannins present in the leaves. A general rule of thumb is that for black and pu’er teas you must use water just off the boil. Let the leaves steep for 3-5 minutes. For oolongs the temperature varies depending on the oxidation level, but typically brew from 175-195 degrees Fahrenheit for 3 minutes or so. Green and white teas taste best at lower temperatures, from 160-176 Fahrenheit or even 150 for more delicate teas. The brew time can be from 30 seconds to 3 minutes depending on the type of tea.

Gongfu cha style: A brewing style that I learned about during my time in home confinement is the gongfu cha method. This involves a ritual preparation of the tea encompassing many short, low volume, steeping of the tea leaves. Traditionally, the leaves are brewed in a gaiwan, a vessel consisting of a saucer, cup, and lid. You use the lid as a strainer when you pour out the tea liquor. Naturally, I acquired such a device over the internet and love using it. This process allows you to focus on making the tea, experience how the flavors and aromas change during subsequent infusions, and achieve a feeling of calm and mental clarity I did not think possible during a PhD.

I have bought tea from several venders and have enjoyed many different types that are mentioned above.

Harney and Sons are based out of New York and have an expansive selection of teas at a good price. I enjoy their Bai Mu Dan white tea, Scent of the Mountain Sencha, and Ali San Oolong.

What-cha is a UK-based company sourcing many great teas. I sampled many different teas from here, but my favorites were the Yunnan Pure Bud Golden Snail black tea, Obubu Kabuse sencha, Taiwan GABA oolong, and a Taiwan Mi Xiang honey black tea. The owner also includes a hand-written note with each order, which I think is a nice touch and shows his devotion to fair and sustainable tea trade.

MEM Tea: Right in our own backyard located between Porter and Davis square is MEM Tea. I await some of their teas in the mail, but they have a great selection of teaware. I received some gongfu cha tea brewing essentials from them and the quality is good.

Rare Tea Company: Another UK-based company, the founder of Rare Tea searches the globe for unique and well, rare, teas that are unlike anything else. From here I have sampled teas from Malawi, Nepal, China, and Japan. They are truly unique and delicious but rather pricey for a graduate student. My favorites are a White Peony from Malawi, a Sofu Sencha (smells like summertime and happiness), and a silver tip jasmine white tea.

I hope you discover a new tea that you enjoy brewing and tasting to help you cope with the research shutdown.

One thought on “Learning to love quaran-TEA-ne”