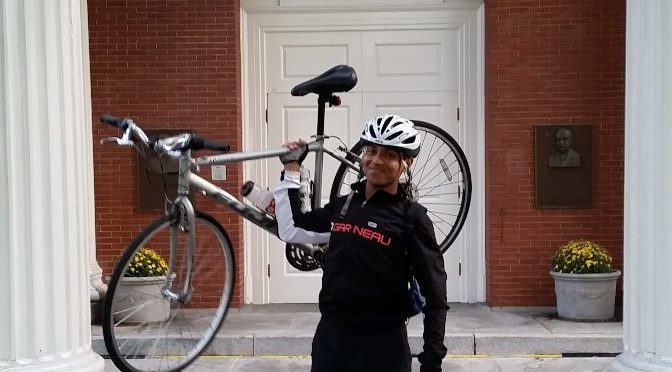 This month I present, for your reading pleasure, excerpts from my interview with Nafis Hasan from CMDB. Nafis and I had a remarkably wide-ranging conversation covering existential philosophy, cultural differences between Bangladesh and the US, the exquisite symmetry between ecology and cell biology, and current controversies in carcinogenesis research. I can only hope to capture in the space below a mere whisper of his deeply-considered intellectual convictions and passion for social justice. Fortunately, Nafis has also authored an editorial on Science Activism in this very issue, and I strongly urge you, dear reader, to check that out next!

AH: Where did you grow up?

NH: I grew up in the house that my father and his brothers built in Dhaka, Bangladesh, and moved to the U.S. when I was 18. Most of my dad’s siblings and their families lived with us in Dhaka. As kids, we didn’t really have the notion of “privacy” for the longest time: the elders would each get a room and the kids would sleep in the living room on a big mattress. My cousins and I would all get into trouble at the same time… it was fun!

AH: Have you had any opportunities to travel around the States?

NH: For F1 visa (student visa) holders, you have a 3-month window where you have to find a job or get into school. After graduating from Lafayette College [in Easton, Pennsylvania], I thought, “If I have to leave the country, I might as well see it.” So when one of my friends said, “Let’s do a road trip,” I said “Let’s do it!” We started from Pennsylvania, went down to Virginia, our first stop was Shenandoah – I had actually never been camping before that, it was all a very new experience. We had two American kids, a Colombian kid, and a kid from South Africa… It was very liberating, and I started to see the country as it really is. At the same time, on the road, I was interviewing for jobs. I remember doing a job interview [by video phone] at a McDonalds in Idaho. I borrowed a shirt from one of my friends who dresses nicer than I do, since the interviewer could only see the top half of me… Over the course of two months, I think I applied to 200 jobs. Finally, I ended up getting a research tech job at Thomas Jefferson University in Philly.

AH: What was it like adjusting to American culture?

NH: When I came to America, I had no idea what to expect, I had only heard things from my cousins who came here for college and what was on TV. One thing that I had in my mind was that I was going to try and meet as many people of different nationalities as I can. But there was a big cultural divide, how they grew up versus how I grew up. I think the road trip really helped me to understand the diversity of American people and especially during these times when people are so polarized, I reach out to that experience. We grew up seeing this version of America as the land of opportunity, the land of freedom, but America is not the government, is not their foreign policy, is not the consumerism that has taken over the world… America is more about the people that you meet here, and that’s how I see the country. America encapsulates the dichotomy of homogeneity versus heterogeneity, and I think that’s so beautiful.

AH: When did you begin to discover your interest in biology research?

NH: In Bangladesh I went to a private school that taught everything in English. The division of sciences starts in 7th grade, and biology was definitely the most interesting to me. At the same time, I was caught up in the process of deconstructing my religious identity, because I was reading biology which has hard facts about how your body works, which calls into question how life was created… I found that more fascinating than having a set answer imposed by some superior being.

AH: How did you choose your field of study for grad school, and why is it so interesting?

NH: I started reading a lot of scientific nonfiction, presenting cancer as a very complex biological phenomenon, which was fascinating to me. I also had a solid foundation in breast cancer by the time I applied for grad school and I wanted to pursue that… I had seen lots of tumors, but no mammary glands. The more I learn about the mammary gland, the more I am fascinated by it. It develops throughout life: initially it’s just a branched structure that looks like sticks; when you get pregnant, it almost flowers, with grape-like clusters that come up through alveologenesis and these alveoli then revert back to the branched structure after weaning. It’s comparable to how trees shed leaves in the Fall, except in reverse: this course of nature – the seasons that you see – the same dynamic is there in animal tissue. And all of this is happening through the lifetime, after the majority of the organs are already fully developed!

AH: What is one of the big challenges or controversies in your field at the moment?

NH: Traditionally, cell culture is done in two dimensions, on plates that are usually plastic – and plastic is not a natural substrate for cells to grow on, so you can’t recapitulate the same 3D environment where the cells are growing inside an organism. You can either try to mimic the natural environment as much as possible, or try to make a scaffold that is biocompatible… Cells need to be able to manipulate their environment, just as the environment should be able to provide them with physical or chemical cues to make them grow or organize in certain ways. Our lab has a very organic approach to it: we do 3D cultures in type 1 collagen, the predominant structural protein found in the mammary gland stroma. We believe that “organicism is greater than reductionism.” This is where we’re at odds with a lot of others in the cancer field, where reductionism is still the predominant philosophy. And we’re not saying it’s bad! It’s just insufficient to explain carcinogenesis.