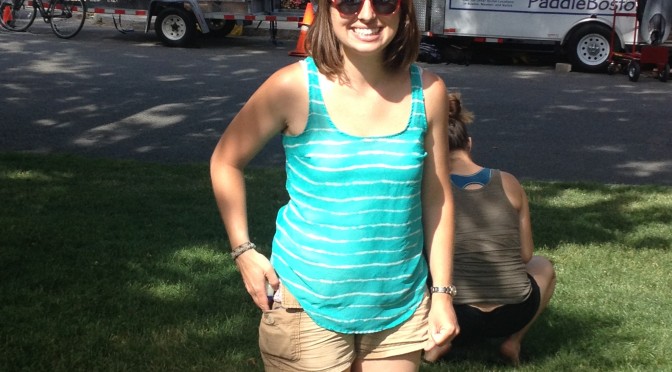 I’m Andrew Hooper, a fourth-year student in Dr. Jamie Maguire’s lab in the Neuroscience program.  For as long as I can remember, I’ve been fascinated by the stories of how scientists came to be scientists.  Where are they from?  When did they recognize their passion for science?  How did they get their foot in the door?  What is it about their topic of interest that so captivated them?  And what breakthroughs just over the horizon would most excite them?  There are as many compelling, eye-opening answers to these questions as there are scientists, and I decided to highlight the diversity of backgrounds and perspectives at the Sackler School by gathering and sharing some of these stories.  Inspired by the format of Brandon Stanton’s wonderful “Humans of New York” blog, I called this project “Humans of Sackler”.

Recently I had the opportunity to sit down with Jaclyn Dunphy, a fourth-year Neuroscience student in Dr. Phil Haydon’s lab.  We discussed the questions above and many more, and I’m very happy to share with you a small sample of our conversation in this, the first issue of “Humans of Sackler”.  Enjoy, and please look me up if you’d like to share your story and be the next Human of Sackler!

AH: Did you come into college with a biology major, knowing that that’s what you wanted to study?

JD: I wanted to be a teacher when I started college because I had a really great biology teacher in high school. I went to Xavier, a private Catholic college, so I also thought I might want to be a religion teacher. For the first couple years I took biology, education classes, and theology classes. But I had a ‘coming to terms moment’ with what my major was going to be around sophomore year, and so I just went through the bulletin of all the courses that were offered and picked the ones I liked the best – and they tended to be related to biology, so I figured that’s what I should be doing. I didn’t know what I could do with the degree. I had never heard of graduate school until after I graduated!

AH: Were your parents interested in science, or did your interest develop totally independently from family?

JD: I think my interest in science definitely goes back to roots that I have with my dad. He has a workbench in the basement, and some of my earliest memories of us spending time together were us building rockets in the basement. He was very into space and stuff, so we would build rockets down there. Also, I was in this program for gifted students when I was in fourth and fifth grade, and we were assigned weird projects – like if you’ve heard of the ‘egg drop’ project, where you have to drop an egg off of a roof and get it not to crack? I would get assignments like this and take them home. I was really excited about them, but my dad was even more excited! So we would work on those things together, and I would go back to school with something that was, like, 80% his idea and 20% mine. So in those couple of years we had five or six things we worked on together in the workshop downstairs, and that was really fun… We built a bridge with Popsicle sticks, and I could stand on it. I could stand on it to this day! We made I-beams – not my idea. I’d never heard of that, but he was like ‘We need to build I-beams!’ We even sanded them – it was intense.

AH: After you finished undergrad, what did you do for work and how did you transition eventually to grad school?

JD: I was working at an upscale restaurant called Bistro on Main, close to Kent State’s campus, where Kent State professors take their seminar speakers out for dinner. So I had seen a couple groups of them come through, but one night I was waitressing for a table of four people: three people from NEOMED/Kent State and their invited speaker, Wendy Macklin. When I came to the table they were talking about prion disease, and I said, ‘Oh, that’s odd dinner conversation’. And they asked ‘How do you know what that is?’ in a very accusatory but jovial tone, and I said ‘Well, I just graduated with a degree in biology’ and they were like ‘Then what are you doing here?’ and I said ‘Waiting on you, what does it look like?’ So after that, all four of them took turns harassing me, they asked ‘Do you need a job?’ and I said ‘No, I have a great job, I’m making a lot of money doing this, I’m just trying to figure out what I want to do.’ And they said ‘Well, if you figure it out, then here’s my card.’ They put the card in the bill and they said, ‘Give us a call if you want to work as a technician.’ And I didn’t even know what that meant. At that point, I thought I was going to be cleaning rat cages. So I interviewed with one of the professors at the dinner, Bill Lynch, a few weeks later. It was the worst interview I’ve ever had, it was terrible! He’s a virologist: he asked me whether viruses are living or not. I didn’t know it at the time, but that’s a controversy among virologists. So I just picked a side, and then he argued me all around in circles until I switched sides, and then he asked me why I switched sides..! I left feeling so defeated; it was the first experience I’d had of someone who really, really questioned my thought process. I felt terrible, I felt like I had done such a bad job. But he ended up offering me the job because he liked that I didn’t give up, he liked my enthusiasm.

AH: What was it about glial cells that made them so interesting to you?

JD: I fell for astrocytes – I liked that they were so abundant but they were so under-studied. There was so much to learn. What are they doing? There has to be more to the story. Later on, when I met Phil Haydon, he said that in the field of glia, there’s a lot of low-hanging fruit, and I felt like that was very much the case. Glia are… I hate the word ‘support’ cells, but they are support cells for neurons. Neurons are like actors in the big play that is the brain, so the glia are stagehands, directors, producers, writers – they’re the ones that actually control the show. But the ones that you see and you care about are the neurons.