On 29th October of this year, the Lancet Oncology published a report on the carcinogenicity of red meat and processed meat [1]. The Working Group, consisting of 22 scientists from 10 different countries, recommended to the International Association of Research on Cancer (IARC) (part of the World Health Organization) to classify processed meat to be “carcinogenic to humans” (Group 1) and red meat to be “probably carcinogenic to humans” (Group 2). These recommendations were made after evaluation of more than 800 epidemiological studies.

Since the publication of the report, mainstream media has picked it up with a fervor that painted the report with a facade of novelty. However, as Tufts University’s very own Dariush Mozaffarian  (Dean of Friedman School of Nutrition Science) pointed out in an interview with National Public Radio (NPR), this report only served to solidify what has been known for quite a while now.

Given the significant associations made between cancer risk and consumption of red and processed meat, what is the public supposed to do? 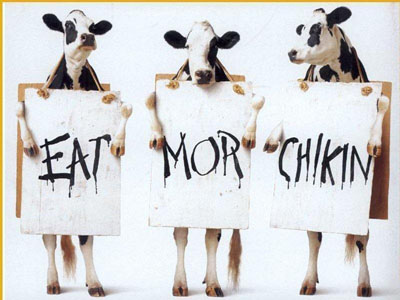 Besides following Chik-fil-A’s advice, here is what you need to know before you decide get well done with meat.

Definitions
Red meat include beef, lamb, pork, goat. Processed meat include anything that has been cured, salted, smoked, or preserved in some way, e.g. – sausages, bacon, hot dogs, etc.

However, labeling processed meat as cancer causing and red meat as probably cancer causing does little to soothe our worries. But! As Cancer Research UK points out, IARC does “hazard identification” and not “risk assessment” [2]. Therefore, IARC classifications can only provide a qualitative assessment and does not tell us how potent something is in causing cancer. This is exemplified when red/processed meat is compared to tobacco, which is also classified into Group 1. In the UK, excessive consumption of red/processed meat resulted in 3% of all cancer cases annually whereas smoking caused 19% of all annual cancer cases.

How to balance your bacon
Dariush Mozaffarian suggests no more than, one or two servings of processed meat per month and of red meat per week.  For more customizable options, check out the awesome infographic from Cancer Research UK below –

So, as with everything, MODERATION IS KEY! Unless, of course  you are Ron Swanson.

While the meat industry does not agree with the recommendations based on scientific evidence to eat less meat [3], nothing topped the Far Right’s claim that this must be a Muslim Conspiracy to establish Sharia Law [4].