The purpose of my research is to investigate next-to-leading order (NLO) electroweak corrections as this forms a hole in our scientific knowledge that inhibits us from precisely understanding the background of particle accelerator experiments, especially at higher energies. To investigate these electroweak corrections, I’m using data produced through Monte Carlo simulations. Using simulated data is important because it’s a way of quickly and easily probing the limits of the current scientific models, providing a baseline predication that can later be compared and confirmed with real life experimental data.

I’m actually slightly disappointed that I don’t have more results to share for this poster session. There is a lot of work that needs to be done before any ‘real’ results can actually be taken. A lot of what I’ve been doing is creating statistical samples with the Monte Carlo simulations, writing code to build the distributions of variables that we might want to investigate, and working on a list of cuts that would provide a clean and useful dataset. Once we’ve confirmed that the cuts are appropriate, I can then change the parameters of the models uses to run the simulations. These parameters represent a fundamental uncertainty in our knowledge of the physics theories. Hypothetically, if the ratio calculation was entirely successful in cancelling out all of the systematic uncertainty, we would expect to see no effect when we change the QCD models and parameters. This is what I will be working on immediately in the next few weeks. It’s just a lot of coding. A lot of C++. Some would say too much C++. I am part of that some.

I’m not sure if images can be included in the blog post but the image below illustrates how complex particle collisions can be. As explained here: https://www.semanticscholar.org/paper/Introduction-to-parton-shower-event-generators-Hoche/085e658fe0e5b313c84e4dcb2e6c75aba63315d6

There are dozens of variables that go into each vertex of the diagram, each with their own uncertainty. Separating the uncertainties present in these other physics processes from the electroweak corrections is a difficult process. 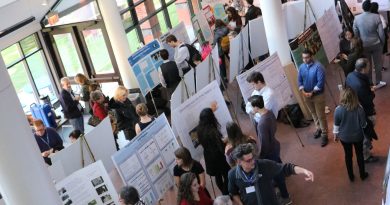