Corporate leaders are powerful political actors. They influence the political donations of their corporation’s PAC and their employees, serve on federal advisory bodies, and get individualized access to elected officials and their staff. Within the last two decades, several academic publications have revealed what many have long suspected: The CEOs of America’s largest and most valuable companies are overwhelmingly conservative. In recent years, CEOs have taken up a new form of political influence by engaging in CEO activism, the practice of speaking out on political and social issues not directly tied to their business interests. CEO activism, which is widely covered in the media, has been shown to shape public opinion as much as politicians.

Despite having this influence, little is known about which CEOs engage in activism, what issues they speak out on, and how often they speak out. To fill this information gap, I construct a dataset cataloguing the public statements of 144 CEOs of Fortune 500 and S&P 1500 companies, along with an array of personal and corporate biographic data. Leveraging publicly available metric of political ideology, I examine the relationship between a CEO’s political preferences and how often they engage in activism.

The results of my research are as follows. First, despite most CEOs holding conservative political preferences, I find that liberal CEOs are more likely to engage in activism than conservative ones and that they engage in it more often. Second, my regression analyses highlight that the characteristics associated with CEO investment in CPA have no effect on CEO activism. Third, I show that a CEO’s partisan preferences has a strong and independent effect on how often they engage in CEO activism.

Influenza Virus and PA-X: Looking At The Sequence Specificity of RNA Cleavage 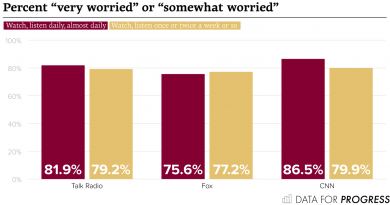 Good news?: FOX News can’t save Trump from the reality of COVID-19

3 thoughts on “The Political Preferences of Activist CEOs”