My Summer Scholars project fed into the senior thesis work for my Interdisciplinary Studies major. I considered coffee-based artworks in Puerto Rican culture as a case study for analyzing contemporary artworks that address human-caused climate change.

Long before I began my research on this topic, I developed the morning ritual of preparing a hot beverage, be it coffee, tea or yerba mate, and relishing the brewing process. In early 2019, I started writing down the date and what I brewed, and then saving the coffee grounds, tea leaves or yerba. I do this by spreading the drink remnants out in thin layers, often elevated on a cloth for greater air flow, and leaving the trays exposed to the air for several days. When I’m confident everything is dry, I transfer the drink material into an empty glass jar, in the order each beverage was consumed.
I originally explored pouring the dried drinks into paper fiber and making textural handmade sheets. I experimented with making a journal of these papers, as a space to transfer the daily drink list into a volume made of the very materials it refers to. However, I became stuck on the jars of my layered drinks, enamored with the beautiful objects they had become.

Around the same time, I started researching our relationships to the material. As I formed a worldview that acknowledges all materials as their own living entities, it worried me that I simultaneously appeared to be taking away the agency of my dried drinks by trapping them in the jars. I felt that my inherited human subjectivity was getting in the way of following the life of these materials.

I have now come to see my long-standing ritual of brewing a hot drink each morning, and my more recent practice of drying out the drink remains, as a method of reflecting on my response to the climate crisis. This is not an outward response of actions I am taking, but an inward response of witnessing the destruction of the planet’s ecosystems, and the unfair toll it is having on so many people. I find that the time I spend preparing and consuming these drinks is a means of selfcare, of coping in the face of such devastation and grief. Sipping on these beverages that have traveled so far across space and time, and through so many hands, to reach me is a moment to sit with the reality of things. It’s not a moment of fear or desperation, but of silent openness, listening to the world around me.

My mentor brought up that my practice of drying the drinks out and collecting them has become a gesture of remembrance. I am building up a sort of monument or memorial to the moments when I have been led to feel connected with the environment; that I am a part of it, rather than separate from it. I am paying homage to what sustains me. There are still feelings of nostalgia, melancholy and bitterness when I look at the jars, as I have intervened in the decomposition of the organic materials inside, or nature’s natural next step— I compost all my other food waste, so these drinks could easily have become fertile soil for new plant growth. In this, I am resigned to acknowledge my persisting human exceptionalism, which has led me to save these materials just the way they were when I consumed them (even as I believe they nourished me, and credit them with deepening my connection to the earth).

As I work to resolve these circular thoughts, or even just to unpack them further, I want to lift these drinks up in a way that reflects my tremendous care for the greater earth body, as part of my grappling with the age of anthropogenic climate change. I have started photographing my jars, with the goal of capturing the life I see in these materials. In the space of a still image, I want to allude to the agency these drinks have in the world as we know it now. I also want to mourn the irreversible biological changes that these crops and their corresponding climates have already undergone. Ultimately, I want to produce a series of images that impart my response to the climate crisis.

My initial photographs are at the base of my poster. How do you respond to them? 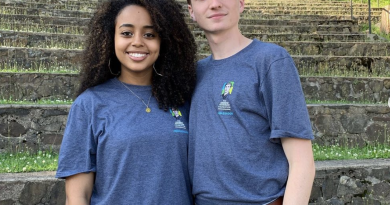