The Fletcher School and the Atlantic Council

“Resurgent Authoritarianism and Tools to Respond”

Founding Chair of the International Center on Nonviolent Conflict

Join us on Friday, April 29th from 10:00AM-5:30PM at Breed Memorial Hall (51 Winthrop Street) as we convene a conference co-hosted by the Fletcher School and the Atlantic Council on “Resurgent Authoritarianism and Tools to Respond.” The conference aims build a bridge between the military/security and democracy communities on how to respond effectively to authoritarian regimes in regions where the U.S. has national security interests at stake. Confirmed panelists include members of the military and civilians at the US Department of Defense, the US Department of State, the private sector and activists to join in a conversation about how make the national security case for democracy promotion.

The afternoon will consist of regionally focused panels on Post-Arab Spring Trajectories and Influencing Military Reforms in Africa.  Each panel will discuss lessons from the field on effective tools for influencing the behavior of militaries and regimes in non-democracies where the U.S. has military engagements, and implementing all-of-government efforts on security sector reform, institution building, and countering corruption and violent extremism.

Brexit and the Future of the EU 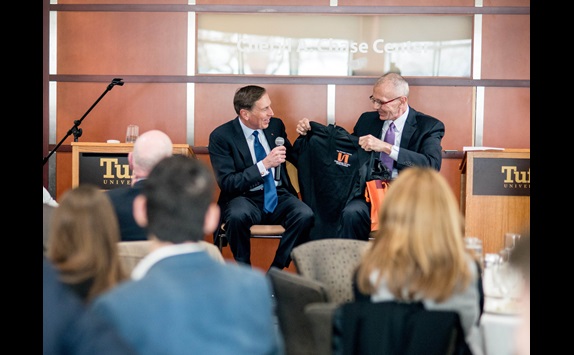 Professor Richard Shultz presents the "coveted" ISSP sweatshirt to General David Petraeus during his visit to the Fletcher School in February of 2016.

On January 21, 2015, General Joseph Votel,Commander of the U.S. Special Operations Command, took part in an active discussion hosted by ISSP titled "USSOCOM and the Challenges Associated with Russian Aggression”.  The goal of the event was to gain a better understanding of the near and long-term socio-political-economic-military challenges associated with Russian aggression in the Ukraine.  The approach was to have a discourse with Fletcher Security Studies students, military fellows, and faculty to illuminate practical ways in which SOCOM can contribute to US and NATO policies to meet this challenge.

His initial assignments were to the 3d Infantry Division in Germany where he served as a Rifle Platoon Leader, Executive Officer, Battalion Adjutant and Rifle Company Commander. Following this he served as a Small Group Tactics Instructor at the Infantry School at Fort Benning, Georgia, before being assigned to the 75th Ranger Regiment as a Plans / Liaison Officer where he participated in Operation JUST CAUSE. He was next posted to the 1st Ranger Battalion where he served as the Battalion Liaison Officer, Operations Officer and Executive Officer.

A distinguished expert panel surveys the Iran Nuclear Deal, otherwise known as the Joint Comprehensive Plan of Action (JCPOA). Panelists will address such questions as: Will it pave or block Iran’s path to nuclear weapons? What are the verification issues? What will be the implication of the lifting of sanctions? When and how could sanctions be reimposed? What are the Agreement’s merits and shortcomings, strengths and weaknesses? Come and benefit from a nuanced discussion of these and other questions and issues.

Panel Members include (in alphabetical order):

Antonia Handler Chayes, Professor of Practice of International Politics and Law, The Fletcher School, and former Under Secretary of the U.S. Air Force, and former Chairman of the Project on International Institutions and Conflict Management, Harvard Law School.