The main function of the Marauders Map is tracking people within the campus grounds of Hogwarts School of Witchcraft and Wizardry. As one of the two groups which attempted to tackle the interesting and difficult problem of localization, we wanted to design a robust system.

After analyzing the strengths and weaknesses of a variety of different positioning systems, we settled on GPS positioning, because it is a simple and robust way of getting user location. Most people have smartphones with GPS capabilities, so we decided to design a smartphone app to make use of existing sensors. 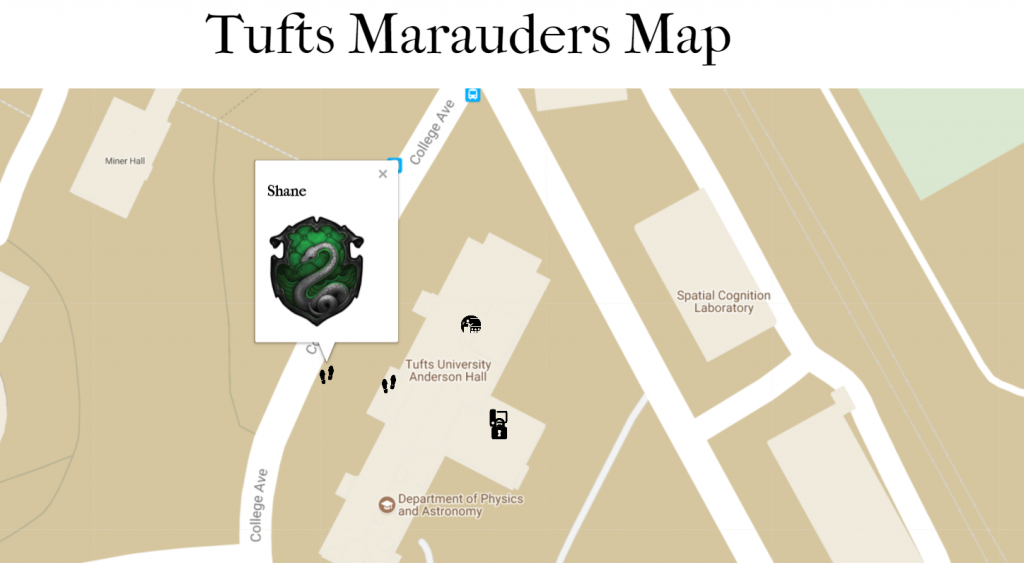 A user’s position shown on the marauders map.

We used MIT App Inventor to create an android app which polled the device’s GPS data and pushed it to the Thingworx IoT cloud. We decided to use App Inventor because it allowed us to easily create and test our app in a short period of time. App Inventor made creating a UI easy and intuitive. It also had prewritten code blocks for polling the user’s location and for pushing data to the cloud using HTTP POST and PUT requests.

The key strengths of our system were its reliability, its use of existing sensors and infrastructure, and its easy large-scale deployability. As a locally installed phone application, our system only needed a GPS signal and an internet connection to broadcast the user’s location at a rate of once per second. Since each user is assigned a unique ID, the backend can differentiate between all of them and the app can be installed on a limitless number of Android phones.

The most glaring weakness of this solution is that it does not work indoors. The buildings block any connection to the GPS satellites preventing indoor localization. Another weakness is that the user must personally install the application on their phone to use the system. This puts responsibility for the correct installation and operation of the app on our users instead of on the design team.  Finally, the high update rate rapidly depletes battery and uses up cellular data.

The main financial opportunity of this app would be to provide data for data-driven advertising. Large companies such as Amazon which have not yet entered the Big Brother track-you-everywhere industry might be interested in acquiring us and our technology.

Our largest threat is that people enjoy their privacy and don’t enjoy being tracked. Without user buy-in and consent our system won’t work. Without a large user base, companies like Amazon will not buy us.