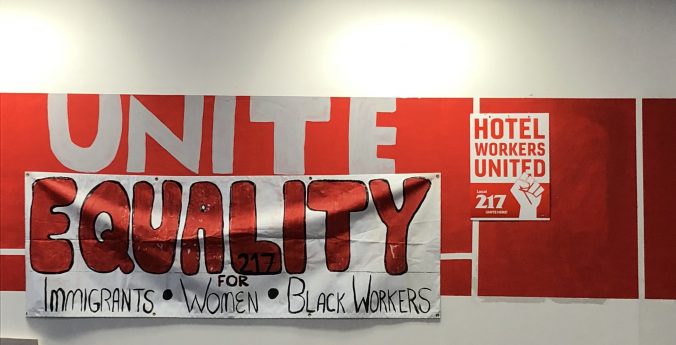 The Centennial NEMA Conference and the Stamford Hilton Boycott

According to NEMA’s Statement Regarding the Labor Situation at the Stamford Hilton Hotel and Executive Meeting Center, NEMA went into contract with the hotel for the centennial conference in August of 2016. In December 2017, workers at the hotel voted to join Unite Here local 217 with a vote of 110 to 5. These workers entered into this vote after months of intimidation strategies from the hotel owners including the presence of armed guards and the hiring of anti-union consultants. 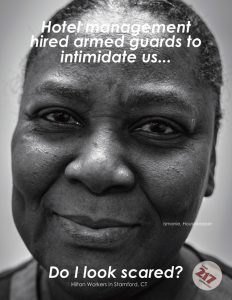 UNITE HERE is a labor union representing 270,000 workers across Canada and the United States. They boast a diverse membership, predominately women and people of color, from across many industries. Their goal is “to enable people of all backgrounds to achieve greater equality and opportunity.” The hotel workers at the Stamford Hilton are currently in contract negotiations with the Stamford Hilton for three main demands: better wages, free quality healthcare, and pensions.

NEMA chose not to change locations for the conference as progress had been made in talks between the two sides over the summer. However, in recent weeks the headway made deteriorated and demonstrations and picketing at the hotel has continued. While NEMA choose to continue with the centennial conference they opened lines of communication with the hotel workers and invited union leaders to speak at the crowd at the keynote meeting.  Pampi of Decolonize our Museums conference panel facilitator, furthered lines of communications and disseminated information on requests from the hotel workers including the cancellation of hotel rooms and moving workshops off site. The purpose was to show both the union workers and the hotel management our solidarity to the workers strife. So why is it important for museum professionals to show solidarity to unionized hotel workers?

As museum professionals, workers, and emerging professionals we must first and foremost have empathy. As human, we must have empathy for the struggles of others. However, beyond that, museum workers have much in common with hotel and other service industry workers. Not just in the long hours and low wages we share, but in the structures of the industries that often relegate women and people of color to the lower levels. In recent years many non-profits have been turning to unions to organize workers and collaborate on common causes and increasingly museum security and custodial staff have unionized. Museums such as MoMA and Plimoth Plantation have unionized workers and have successfully fought for better working conditions, wages, and healthcare. Other organizations such as #Museum WorkersSpeak have attempted to look “at the relationship between museums’ stated commitments to social value and their internal labor practices.” We stand in solidarity because these labor issues effect this profession as well. We enter the museum field drawn in by a love of museums, but research shows many emerging professionals leave do to low wages, insufficient benefits, and lack of job prospects among other reasons. What more can we and should we do to create better labor environments for both ourselves and others?