Looking for a *Revolutionary* Summer Job in Boston?

As I approach my graduation from the History and Museum Studies program here at Tufts, I’m reflecting on the past two years — on all I have learned and experienced, the ways I’ve grown, the incredible people I’ve met, the powerful museums I’ve visited. I’m also reflecting on my time as an editor on this blog, which, all too quickly, is also coming to an end.

Astute readers may remember that my first post as History editor, way back in June 2021, was about one of my favorite museum experiences in Boston: an afternoon at the Old State House. Most commonly known as the building that loomed over a group of British soldiers and American colonists on March 5th, 1770 during the infamous Boston Massacre, it’s an impactful place even just to see in person. 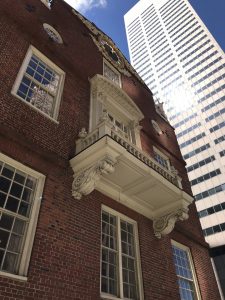 The Old State House — one of my favorite places in Boston.

One can imagine, then, what a thrill it is to be at this museum every day, surrounded by its rich history and immersed in its vision for the future, characterized by true equality and the fulfillment of the American Revolution’s promises for, at last, all people.

For the past several weeks, that has been my experience — I’m working as a supervisor on the retail team at Revolutionary Spaces — and it could be yours, too. I feel as though I have come full circle, from writing about this museum I love to working in it. And the good news is that they are still looking for many more people to join the team! In preparation for their always-busy summer season, Revolutionary Spaces is currently hiring people in numerous departments. 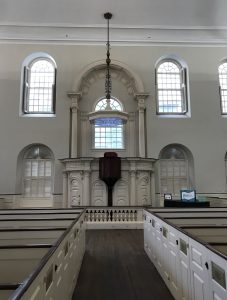 The beautifully reverent Old South Meeting House, where famous congregants included Phillis Wheatley, Ben Franklin, and Sam Adams — and where the latter gave the signal for the Sons of Liberty to storm the harbor and commence the Boston Tea Party in 1773.

If you are interested in becoming a part of this special organization, consider applying to one of the many positions they have open this summer! Check out these links to learn more about how to apply for the positions of Retail Supervisor, Retail Staff, Development Manager, and Development of Marketing & Communications. On the historic interpretation side, the visitor experience staff is also hiring! 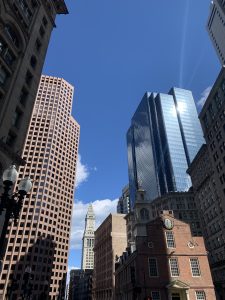 Not a bad view on the walk to work, in my opinion.

I have only been working at Revolutionary Spaces for a few weeks, but I already feel so welcome and inspired by the special community they have created. If you like the idea of spending every day immersed in the world of the Old State House and the Old South Meeting House, I highly recommend applying to Revolutionary Spaces.

Identity: Who are we in museums?