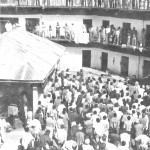 Remarks at the Inaugural of the AU Human Rights Memorial

By Professor Andreas Eshete, Chairman, Interim Board of the AU Human Rights Memorial

Walter Benjamin, a vibrant voice for modern civilization, a voice tragically silenced by Nazism in 1940, famously said: “There is no document of civilization that is not at the same time a document of barbarism.” The inner courtyard of the former central prison in Addis Ababa, known as Alem Bekagn, during the Dergue Era 1975-1987. (Ethiopia Red Terror Research and Documentation Center)

I hope it would not seem that I am joining the unseemly contest for who is peerless in the matter of victimhood by saying that we Africans had suffered far more than a reasonable share of the barbaric dimension of modernity: the racist slave trade, white supremacist imperial rule, genocide, Apartheid, and so on. The African Union Human Rights Memorial is a site for the permanent preservation of the memory of the multitude of innocent African victims of these and other grave abuses of human rights. The Memorial places especial emphasis upon those innocent victims of abuses executed or sponsored by African states and leaders such as the Rwandan genocide, the slaughter in cold blood of the senior officials of Emperor Haile Sellassie’s government and the tens of thousands of youth wantonly slain during the Red Terror – two of the many grave crimes against human rights committed here by the military regime. Though there are no doubt the dirty hands of others in these infamous deeds in Ethiopia and Rwanda, what is being singled out for particular attention are serious crimes for which, above all, we ourselves are to blame. This is one reason why it is important that African states and governments collectively resolved to honor the memory of those lost, innocent African lives. What is being recognized at this site today is a deep moral fact about ourselves that no emergent generation of Africans can ever afford to forget.

The Memorial is also an acknowledgement at a continental level that African peoples anywhere cannot ever again be the victims of such abuses. And in the event of such gross violations, it is a collective responsibility to come to the rescue of those targeted and to make sure that the perpetrators are brought to justice. In sum, the Memorial is a standing symbol of Africa’s collective commitment to justice.

My deep thanks, on behalf of the Interim Board of the AU Human Rights Memorial, go to the African Union for this exemplary undertaking. I am also grateful to Justice Africa, numerous African associations of victims and families of victims, varied national memorials of victims of human rights abuses, the Government and Embassy of Japan and others who labored to make this Memorial possible.

Finally, I humbly thank the various faiths here that are all offering prayers and ringing bells to mark this solemn occasion.