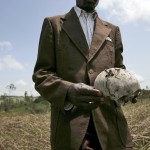 This is an excerpt from the essay, published by the Fletcher Forum of World Affairs, Vol 35:3 (Winter 2011) and available in full on their website.

On October 20, 2011, the battered body of the deposed Libyan leader, Muammar Qaddafi, was paraded through the streets of Sirte and Misrata. Although the details of his final hours are in question, some facts are clear. There were at least two bullet holes in the 69-year-old’s dead body, one to the head and one to the stomach. He was shot after forces loyal to the National Transitional Council beat him, leaving him cut and bruised. It is also possible that some of his wounds were the result of a NATO air attack on his 100-car convoy as it fled Sirte, the site of his final stand. While a complete official version of his death has yet to be pronounced, journalists located several eyewitnesses whose testimony, in addition to the brutal video that surfaced first on Al-Arabiya[i], indicate that he was executed after being taken into custody. Reuters journalist Rania El Gamal quoted a local commander who asserted that while the leaders of the Interim Transitional National Council (NTC) wanted to keep Gaddafi alive, that “over-enthusiastic” young fighters executed him.[ii]

And thus ended the 2011 Libyan Civil War, as well as NATO’s mission, “Unified Protector.” It is not shocking that a civil war would conclude with a furious, over-enthusiastic, and young armed force finishing off a leader who had reigned for more than forty years; there are many such examples throughout history and across the globe. But it ought to give pause for reflection on why an international intervention authorized by UN Security Council Resolution 1973 “to protect civilians and civilian populated areas under threat of attack,” used the cover of an humanitarian imperative in order to take sides on an agenda of regime change.

The story of what enabled this chain of events includes three crucial narrative frameworks that inform today’s agenda of “protection of civilians” in conflict. First is a teleological assumption that the occurrence of attacks against civilians will, unless halted or deterred from outside, inevitably escalate towards genocide. Linked to this is the assumption that wherever violence against civilians is deliberate and systematic, the killing of these civilians is the motive of those inflicting the violence. Second is an epistemological assumption that privileges coercive military operations conducted on humanitarian grounds by international forces. Third is an ethical imperative based on the above teleology and epistemology that forecloses the historical and political discussions of how mass atrocities actually end. This essay examines these three frameworks and, based on comparative evidence, provides a counter narrative to the dominant civilian protection agenda by returning to the historical record of how mass atrocities end.

This is an excerpt from the essay, published by the Fletcher Forum of World Affairs, Vol 35:3 (Winter 2011) and available in full on their website.