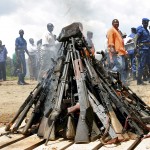 On the theme of new wars and new peace

Mary Kaldor’s New and Old Wars (first edition, 1999) crystallized thinking about the changing nature of war in the globalized post-Cold War era, in particular focusing on the proliferation of non-state actors and the systematic targeting of civilians, the importance of identity politics, and the inter-relationship between private and often criminal interests and political conflict.

As this book enters its third edition, Kaldor has further developed her thinking, updating her material to include Iraq and Afghanistan, responding to some of the critiques of her work and providing a richer conceptual and evidence-based backdrop to explain “new wars.” Addressing the accumulation of new conflict data, Kaldor points to two factors: first, most databases rely on state-based indicators, which reveal that “old” wars are indeed lessening in severity and prevalence. Second, there is a significant gap in data collection outside a state-based framework, therefore the data in hand are not well-equipped to capture the contours of new wars.

To the argument that new wars are not really new, Kaldor addresses how new wars need to be understood in terms of today’s processes of globalization. However, she also clarifies that the concept does not describe a radically new phenomenon but rather provides a new way of understanding conflict and challenging policy responses.

Old wars are defined with respect to the Clausewitzean “ideal type” of a contest of wills between states, tending to an absolute in which each mobilizes the maximum effort. New wars represent a new “ideal type” of conflict, namely war as a joint enterprise among different groups, for whom benefiting from the continued armed conflict is an end in itself. The inner tendency, she states, is not “war without limits, but war without end.” The distinction between old and new wars lies in the analysis and should not be read as a diagnosis of empirical trends.

This does not mean that we are freed from the scourge of “old war.” The failure to grapple with today’s new wars and a generational forgetting of the horrors of twentieth century conflicts may increase the chances of a return to major conflagrations between states.

In the belief that new wars demand a new formulation of peace as well, the World Peace Foundation at the Fletcher School is seizing upon the moment of this new edition of New and Old Wars to reflect on how scholarship on “new wars” has evolved, what new peacebuilding practices have emerged, and, in light of these changes, what challenges academics and policymakers face today.

Despite an explosion of scholarly interest in civil war, including in such diverse disciplines as economics and social anthropology, and a proliferation of inter-governmental and NGO efforts in conflict prevention and resolution and post-conflict reconstruction, there are still major gaps and important controversies in the field. Even the definition of war and the measurement of conflict are disputed, and models of peacemaking and peacebuilding often fail to address the empirical realities of complex conflicts.

The theme of how international conflict resolution practices should respond to the changing nature of war and organized violence will be one of the main pillars of the academic program of the WPF’s research and of its blog, Reinventing Peace. We now inaugurate this theme with a series of essays from participants in the first WPF seminar on “New War, New Peace.”