Sparking a debate: Ending mass atrocities and the responsibility to protect “Genocide” is not going anywhere anytime soon 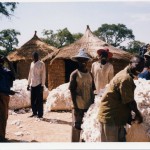 Beyond the Coup and Rebellion: The Malian Peasantry in the Age of Neoliberal Reforms

By Brian Peterson and Brandon County

Brian J. Peterson is an associate professor of history at Union College (NY). His recent book is Islamization from Below: The Making of Muslim Communities in Rural French Sudan, 1880-1960 (Yale University Press, 2011). His first post on Reinventing Peace is available here.

Brandon County is a Ph.D. candidate at Columbia University, specializing in 20th century popular political thought in Senegal and Mali. He teaches history and Africana Studies at Barnard College.

Much has been written about the political crisis in Mali, and yet a noticeable absence from this discussion has been rural Mali. The news media, and even specialist analysis, has kept the focus on the North, where recently the MNLA declared an independent state of Azawad, and the military junta in the capital Bamako. In this brief article, we take a different tack. In an effort to move beyond the fast-moving political drama in Bamako and the wars and subsistence crisis in the north, we want to consider the subject of the Malian peasantry, most of whom live and farm in the south, and what this might tell us about wider discontent in Mali.

So, for a moment, let us step back with some critical distance from the prevailing moral discourses about freedom and democracy, and concerns over the potential “Talibanization” of northern Mali, in favor of ordinary Malian perspectives on participation and justice. To begin, it must be stated that in recent years we have witnessed a transformation of the Malian economy to the benefit of foreign capital and private interests, but ultimately to the detriment of Malian peasants and workers. Much of this hasn’t made the news, and much of it has been deliberately hidden from public scrutiny. The President Amadou Toumani Touré’s (ATT) government engaged in secretive deals at a time when Malians have grown weary of corruption and deteriorating economic situation. Thus, when examining Mali’s current political crisis, we must carefully consider how ordinary Malians view the privatization of their lands, resources, and public companies by foreign enterprises. Indeed, unchecked neoliberal economic policies imposed from without threaten the viability of sustainable democratic institutions and the very social fabric that makes democracy work in the first place.

Mali is overwhelmingly a peasant society, and cotton is the backbone of the Malian economy. In fact, cotton accounts for more than 80 percent of the country’s export revenues. The Malian Company for the Development Textiles (CMDT) buys peasants’ “white gold” and sells it abroad. Almost two-thirds of this cotton goes to China, where the sweatshop system helps keep socks and t-shirts affordable for shoppers in rich countries. Thus, cotton is central to the Malian domestic economy and an illustration of Mali’s place in global markets. In 2003, ATT and Burkina Faso’s Blaise Compaoré took to the pages of the New York Times to criticize American subsidies that leveled cotton prices on the international market but maintained a grossly unequal status quo. But in ATT’s own country, farmers complain that CMDT mismanagement delays payments for their cotton crops until months after their harvest, exposing them to local subsistence pressures. But even when the CMDT pays, its cotton prices have remained low in order to be competitive on the still-unequal world market.

In August 2008, Mali’s legislature voted to fully privatize the CMDT, divesting the state’s 60 percent share in the company. Since then, in 2010, the Malian government divided the CMDT into four subsidiaries and offered them up for privatization. In 2011, a Chinese company, the Yuemei Group, which already owns cotton fields and garment plants elsewhere in Africa, agreed to buy two of the CMDT subsidiaries in southern and western Mali. In response, peasants have mobilized against these changes. In fact, the Syndicate of Peasants of Mali held its first meeting in February 2012, when more than 600 peasants gathered in Koutiala to express their concerns about privatization and related agricultural policies. It is unlikely that their protests will be heard, and it is quite possible that under new management cotton production will increase. But, in recent years, many have shifted their agricultural strategies to focus on grain production, which at least offers a measure of food security. The annual harvest in Africa’s second-largest cotton producer peaked at 564,971 tons in 2004-2005, but has since plummeted to 243,588 tons in 2011.

Beyond concerns over cotton pricing and agricultural inputs, access to land is under threat. Across the continent and decades after independence, de facto recognition of communal tenure systems and usufruct rights is giving way to de jure state ownership, allowing for further privatization of farmland, especially leasing productive farmland to Libya and soil-poor but cash-rich Gulf states. Indeed, part of the neoliberal push toward privatization has been the extension of freehold land tenure to Africa, a final enclosure of the commons. These developments have sparked broad-based resistance. In November 2011, Malian peasants converged on the southern village of Nyéléni to protest land sales to foreign interests. Other participants came from 30 different countries, speaking to the international nature of the threat of land grabs. At the conference, Ibrahim Coulibaly of the National Confederation of Peasant Organizations emphasized the human costs: “We have seen an increase in land grabbing. Just in Mali alone the government has committed to give 800,000 hectares to business investors. But these lands are not empty! People may not have legal titles, but they have been there for generations, even centuries.”

Recent reports suggest that by December 2010, the government in Bamako had negotiated the lease of 544,500 hectares of Malian land to just 22 foreign investment firms, with 40 percent of the land targeted for the production of biofuel. These lands could otherwise support the livelihoods of half a million smallhold farmers. Furthermore, shifting land away from food production threatens the country’s goal of agricultural self-sufficiency and, in the wake of the 2007-2008 food price crisis, it threatens the urban food markets that rely on the countryside. Beyond land and farming, runaway privatization has made inroads into other sectors of the economy: the railroad, the telecommunications company, utilities, gold mines, and vegetable oil factories are controlled by private stakeholders with a penchant for cost-cutting, producing stagnant wages, discontent, layoffs, and protests. But the government has ignored workers’ voices, and labor leaders have been dismissed and even imprisoned.

Given these transformations and the expected grievances, what does it mean when civil society groups like the Syndicate of Peasants of Mali announce their support for the military junta, and the National Committee for Recovering Democracy and Restoring the State? The peasants’ Syndicate, with their motto of “Land, Work, Dignity,” has asked the junta to pursue four goals: restore the ideals of 1991’s pro-democracy movement; manage the crisis in the country’s north; fight corruption; and work to restore expropriated lands. These are risky moves in a time of political uncertainty and near-empty granaries. But recent announcements supporting the military coup in Mali speak to the fragile economic situation that has developed alongside the country’s robust electoral system. They echo, however faintly, an idea of effective democracy that is more complex than ballots vs. bullets.

A rising tide of discontent may not have caused the coup, but it helps explain why Malians, who have been steadfast supporters of democracy, have tolerated the military junta, even supported it. And, to be clear: to say that we should acknowledge peasant and worker grievances does not mean that we excuse the putschists for their grievous error of expressing dissatisfaction through mutiny and, however inadvertently, overthrowing the democratically elected Amadou Toumani Toure. It was misguided, reckless, and an affront to Malian democracy. Despite ATT’s many perceived failings, and unpopularity, he was still the constitutional representative of the will of the people. Legitimacy via the ballot box trumps any ex post facto legitimacy that the CNRDRE might have accrued after their coup d’état. But whether publicly pro- or anti-coup, the consensus among Malians is that ATT is no longer welcome at the Presidential Palace and the country should return to a civilian government once Mali has been reunified and the northern rebellion has been ended. As protesters in Bamako chant: “Peace first, then elections.”

Still, Malians are proud of their elections, which they see as indigenous expressions of cooperation, tolerance, consensus-building, and decentralized governance. However, they also acknowledge that maintaining democracy is messy and difficult, particularly as the economic situation and the moral state of the elected government test their patience. Thus, far beyond ATT’s “incompetence” in dealing with the northern insurgency, widespread discontent has grown in both urban and rural areas as people have come to believe that their role in the democratic process is limited to casting ballots every few years. While outside observers are keen to understand and measure Malian democracy through elections, reforms imposed from outside and implemented by elected governments have made “democracy,” beyond elections, a less representative practice and—disturbingly—sometimes an unpopular term.

In short, the crisis of Malian democracy was not solely the result of an accidental coup, drought, or separatist wars. And the fact that a counter-offensive never developed suggests that the junta has tapped into these long-simmering grievances, and that the population is already cooked. Certainly, many peasants in southern Mali probably don’t follow the separatist wars in the North, and for them daily survival is more important than the aspirations of the MNLA in their quest for an independent Azawad. Furthermore, for them, the coup and attendant political crisis is primarily a dispute among the political class in Bamako. But, still, it is now no secret that Mali’s democracy was in crisis long before the coup. In short, while acknowledging the real grievances of Malian people, we might also have a little more faith in their desire for tolerance, debate, and cooperation. A firm belief in recognizable justice and democratic participation drives today’s critiques of ATT and the CNRDRE and must taken seriously when debating the future of Malian democracy.

One Response to Beyond the Coup and Rebellion: The Malian Peasantry in the Age of Neoliberal Reforms