Layers of Memory in South Africa In Search of Truth 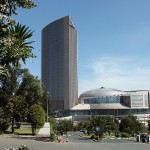 Faced with the prospect of renewed full-scale war between the armies of Sudan and South Sudan, both the Africa Union and United Nations have issued strongly worded and well-matched resolutions, indicating a significant degree of international consensus on the way forward.

On April 24, 2012, a ministerial level meeting of the African Union Peace and Security Council adopted a roadmap to “ease the current tension, facilitate the resumption of negotiations on post-secession relations and the normalization of their relations.” The text calls for an immediate cessation of hostilities; unconditional withdrawal of armed forces to their side of the border; activation of border security mechanisms; cessation of harbouring and support for rebels against the other state; activation of an ad hoc committee previously agreed upon to receive and investigate claims; immediate cessation of hostile propaganda; and redeployment within two weeks of all forces out of Abyei. See the precise language in the full- text version: psc 319 com soudan south sudan 24 04 2012 Note–the AU text also provides a deadline of three months hence from the adoption of the resolution–July 24–for concluding all final negotiations. Failing this, the AUHIP is tasked with drafting a comprehensive report including proposals on all outstanding issues, “to be endorsed as final and binding solutions.”

The UNSC text, Resolution 2046, was adopted May 2, 2012. It essentially follows the roadmap laid out by the African Union, with the slightly different timeline of three months following the UNSC resolution’s adoption–therefore creating a deadline of August 2, 2012. The full text of this resolution is available here: UN SecCouncil Resolution on Sudan_South Sudan _ 2May2012