Meles Zenawi and Ethiopia’s Grand Experiment A Monument for Graziani: Italy’s unresolved relations to its violent colonial past 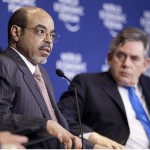 Meles Zenawi: In His Own Words

Our partners, African Arguments, have posted Peter Gill’s insightful tribute to Meles Zenawi, the late Ethiopian leader. Gill, the author of Famine and Foreigners: Ethiopia since Live Aid, quotes extensively from his interview with Zenawi, ending with this comment:

Meles’ work was not quite done.  It is still unclear how far the transition to a new, younger leadership has progressed.  It is still less clear whether sufficiently strong party and state institutions are in place to withstand the shock of his departure and the challenges that the new hierarchy will face.  The ultimate objective, he told me in 2009, had always been for the ruling party to make itself redundant.  Was that still the aim?  ‘If it doesn’t do that, it has failed absolutely – miserably failed in its objective.’

The full essay is available here.