Meles Zenawi: In His Own Words Turkey, NATO & the ‘do good’ response in Syria 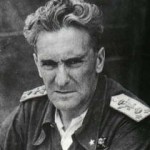 A Monument for Graziani: Italy’s unresolved relations to its violent colonial past

Our colleagues at “Focus on the Horn,” have posted an essay by Jacob Wiebel and Toni Weis, “A Monument for Graziana: Italy’s unresolved relations to its violent colonial past.” The story of one Italian town’s decision to mount a memorial to honor Marsahll Rodolfo Graziana also appears on the August 29, 2012 website of the New York Times. In line with our work on memorialization, we offer you an excerpt of the Wiebel and Weis essay, which is available in full here.

Earlier this month Affile, a small town in the Italian region of Lazio, has inaugurated a Mausoleum dedicated to the memory of the fascist Field Marshal Rodolfo Graziani. The Marshal’s name is well remembered in Ethiopia for his use of chemical weapons and for ordering massacres which cost thousands of Ethiopian lives, including those of a sizable portion of the country’s intelligentsia, during the Italian invasion and occupation of the country in the 1930s. Coverage of these news in the Italian media has remained marginal and has largely centred on the exorbitant price tag of almost 130.000 €, paid for with regional funds. The erection of a monument to a fascist leader has been denounced by some, but the violent colonial realities created by that leader have received little attention. The memorial to Graziani powerfully illustrates Italy’s ongoing flirtations with far-right politics; but it also acts as a reminder of the systematic human rights abuses and war crimes on which Italian colonialism was built, and of the sad fact that these have never engendered the public debate and societal soul-searching that their gravity, and their victims’ dignity, demands.

The illegal use of chemical weapons in the Italian invasion of Ethiopia, claiming thousands of lives, is well documented. For example, on the eve of the Italian invasion of Ethiopia in March 1936, Graziani sent a secret memorandum on his preparations for the conflict to the Ministry of War in Rome. In this file, which has recently been purchased by the Library of Congress (see footnote 1), he outlined his strategy for overcoming the numerous but poorly-armed Ethiopian defense forces. Central to this strategy was the large-scale use of illegal chemical weapons:

[“Essential condition for the succeeding of the Operation: […] the free use of special-liquid bombs and shells in order to inflict maximum losses on the enemy, and above all to effect his complete collapse of morale”]

Rodolfo Graziani in the 1930s. Image in the public domain.

Graziani’s lack of hesitation in employing chemical weapons explains the success of his troops’ advance and discloses his indifference towards international standards of warfare, which also extended to the bombing of a Swedish Red Cross camp that was treating wounded Ethiopians (see footnote 2). But above all it reveals his disregard for the value of human life and his willingness to pursue the goals of fascist Italy at any human cost. That this disregard was not limited to the lives of Ethiopians is evident from his earlier actions in Libya, where his “pacification” campaign was built on concentration and labour camps in which thousands of Libyan detainees perished. In Ethiopia this will to kill was on constant display.

Full article available on the “Focus on the Horn of Africa” blog.

2 Responses to A Monument for Graziani: Italy’s unresolved relations to its violent colonial past