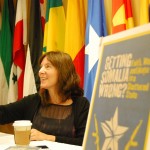 An Evening with Mary Harper

By Mario Patino and Jennifer Keene

Celebrating the World Peace Foundation’s co-sponsorship of the book series African Arguments, the Foundation hosted a book signing and lecture Tuesday for Mary Harper’s Getting Somalia Wrong? Faith, War and Hope in a Shattered State.

Harper gave a thirty-minute presentation on her experience working in and reporting on Somalia, highlighting the nuances not captured in the familiar narrative of the country as a “failed state.” She insisted that a dichotomy emerges, on the one hand there is Somalia as an ungovernable place, with vivid images of famine-affected Somalis in Al-Shabaab controlled territories, and the embattled Somali capital of Mogadishu as the “graveyard of humanity” coming to mind; and the other Somalia, one of complex and dynamic livestock markets, a functional and highly innovative remittance transfer system (Hawala) that fuses aspects of traditional and modern financial markets, and the growing reach of information communication technologies.

Describing the life, color, and industry of the breakaway territory of Somaliland not depicted in the international media, Harper argued that a telescoped vision of the first Somalia continues to drive international engagement with the country, which has stymied efforts to adopt policies more in line with actual and potential local initiatives. This is particularly true in the post-911 era, where counterterrorism aims have driven international, and particularly U.S., policy towards Somalia. For instance, in 2006 the emergence of the Islamic Courts Union, an umbrella network of local Shari’a courts brought a modicum of stability and security to Mogadishu and most of Southern Somalia, only to be overrun by a US-backed Ethiopian invasion a year later. Harper argues that these events isolated moderates and empowered violent extremists, leading to the emergence of Al Shabaab as well as promoting Somalia as a new front for global jihad.

Allowing Somali governance systems to develop and thrive organically, Harper concluded, is the best way to lay the foundation for a different Somalia.

To begin, De Waal posited that perhaps the “original sin” of getting Somalia wrong is to assume that Somalia’s “descent into chaos” began in 1991 with the toppling of military dictator Siad Barre. As a result, the problems of Somalia are routinely diagnosed as a lack of governance, vis-à-vis the lack of central state, evidenced by repeated international efforts to strengthen and legitimize the Transitional Federal Government (TFG). Many Somalis, he noted, understand the waning years of Barre’s regime as intensively violent and on par or perhaps even worse than the subsequent periods without government. Harper agreed with this assessment, noting that the journalistic shorthand used to refer to the cause of Somalia’s woes as a result of a lack of governance is an inaccurate portrayal of Somali history, and drew interesting parallels between life under the Barre regime and the TFG.

Regarding the limited narrative provided by the Western media, one member of the audience asked Harper to describe the narrative of local Somali journalists. Harper noted the incredible number of Somali news websites that connect Somalis at home and in the Diaspora. However, she added that many of these sites are aligned with particular groups or viewpoints, something she attributed to the funding constraints for independent journalism. Nevertheless, Harper noted that there are some outstanding voices that are willing to avoid stereotypes in their reporting. Although security for these journalists is a considerable concern, their work continues to be crucial to hear Somali voices.

A question was also raised regarding Somali attitudes towards Ugandan peacekeepers, who alongside Burundians form the largest contingency of the African Union Peacekeeping Mission in Somalia (AMISOM). Harper noted that although AMISOM troops can appear excessively forceful, for now Somalis are grateful that the Ugandan-dominated Mission has brought a modicum of stability to Mogadishu. Commenting on the terrorism attack carried out in the Ugandan capital of Kampala (July 2010), Harper recognized the high price that Ugandans have already paid for their mission and warned that their welcome in Somalia would likely wear thin the longer they remain. She also questioned why more resources have not been put to creating a proper Somali army?

Another member of the audience also echoed Harper’s dismay reflected in her book regarding the increased presence of aid agencies in Somaliland, asking if this would strangle local dynamism. Harper noted that she found that the ‘can-do’ attitude of Somalis in Somaliland was in fact dissipating, and that while some aid was needed, that an influx of aid agencies could “distort courageous and independent ways of making things work.”

Regarding what it would mean for the international community to refrain from “meddling” in Somali internal politics, Harper posited the bottom-up political system in place in Somaliland that fuses customary authority with elements of Western style democracy, the sustainability of which is evidenced by the grace with which political candidates in Somaliland have continue to accept victory or defeat in local elections. She noted that recent political transition in Mogadishu, which incorporates Somali elders and a formula for proportional clan representation into the political calculus may also reflect a new deference to the “Somali way of doing things.”

This “Somali way of doing things” prompted multiple questions regarding the understanding and necessity of incorporating clan politics into the broader political system. Although admitting her viewpoint had been controversial, Harper stood by her assertion that clans remain too meaningful in Somali society to be treated as a taboo subject. She noted the potential for clans to be constructive even in politics; like an insurance system for Somalis, clans bind people as well as force them apart.

The final question of the evening regarded the vast income disparity within the Somali economy. Harper noted that Somalis are very accustomed to redistributing income within their communities. The disparity, she argued, is rather between Somalis with access to remittances and those that are displaced, including the more than 500,000 primarily women and children living in refugee camps over the Kenyan border.

To flourish, the Somali state will not only need to put in place a viable system of governance that responds to the local needs and demands of its population, but also successfully integrate a number of political actors that continue to resort to violence as a continuation of politics.

The book, Getting Somalia Wrong? Faith, War and Hope in a Shattered State, is available for purchase here.

Learn more about her work on Mary Harper’s blog.

Mario Patino and Jennifer Keene are students at The Fletcher School.

Share
Tagged with: "Getting it wrong in Somalia?" • Somalia