An Evening with Mary Harper Oil Diplomacy in the Sudans: Interview with Alex de Waal 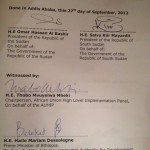 This posts updates the series on agreements signed between Sudan and South Sudan with a summary document: Sudan-South Sudan Agreements-1.03.10.12 PO.

“The Republic of Sudan and the Republic of South Sudan signed nine agreements on a range of issues that they have been negotiating since 2010 initially in accordance with the Post-Referendum Arrangements negotiations provided for in section 67 of the Southern Sudan Referendum Act, 2009 as elaborated upon in the Mekelle Memorandum of Understanding of 23 June 2010. The Parties have also been engaged in the negotiation of outstanding Comprehensive Peace Agreement (CPA) issues, and have now reached several Agreements relating to CPA and post- secession issues.”