Oil Diplomacy in the Sudans: Interview with Alex de Waal The vote is in: the 2012 Reinventing Peace Cartoon Competition 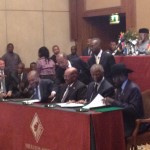 In this op-ed, Thabo Mbeki, former President of South Africa and chairman of the AU High-Level Implementation Panel for Sudan, argues that the recently signed agreements between Sudan and South Sudan are “epoch-making in terms of the remaking of the African continent.” This op-ed originally appeared October 2, 2012 in Business Day Live.

THROUGHOUT the years of its existence the African Union (AU) has paid particular attention to helping the people of Sudan to resolve their problems.

Accordingly it intervened to help resolve the conflict in Darfur by facilitating negotiations, and later sending peacekeeping troops to this region, ahead of their later authorisation by the United Nations (UN) Security Council.

It also fully supported and served as one of the guarantors of the 2005 Comprehensive Peace Agreement (CPA) which ended the decades-long war between the government of Sudan and the Sudan People’s Liberation Movement, which was largely composed of people from Southern Sudan.

The AU adopted these positions as it recognised the importance of Sudan in the context of achieving Africa’s renewal. It understood that given its diverse population and its history, Sudan could be an example to the continent of how to build a democratic country that would respect the principle and practice of unity in diversity, a matter critically important to all African countries.

It was particularly encouraged when the signatories to the CPA, the erstwhile antagonists, while agreeing that the people of South Sudan should hold a referendum on independence, also resolved that during the six years before this referendum, they would work together “to make unity attractive”.

Conscious of the need to end the protracted instability afflicting the neighbouring regions of the Horn of Africa and central Africa, the AU also hoped that Sudan at peace with itself would make an important contribution to ending this instability, thus contributing to the achievement of the goal of peace and stability throughout Africa.

The AU also entertained the hope that a peaceful and united Sudan would serve as a bridge connecting the African Arabs north of the Sahara to the rest of their African brothers and sisters south of the Sahara.

Even when Sudan separated into two states in 2001, Africa continued to sustain the vision that the two Sudanese states would live up to their commitment to co-operate in building two viable states.
Accordingly, the AU has looked forward with great expectation to the day when Sudan and South Sudan would conclude the agreements that would give concrete expression to the goal shared by both republics to live together in peace and to co-operate in building these two viable states.

Happily, on September 27 the presidents of Sudan and South Sudan led their delegations in signing a swathe of agreements that will define their relations.

At least three features mark these agreements as epoch-making in terms of the remaking of the African continent.

First, they constitute an agreement negotiated and concluded by Africans whose implementation will make it possible for the UN Security Council to determine that the conflict in this part of Africa has ceased to be a UN Charter Chapter VII threat to international peace and security.

Second, they are unique in terms of defining African interstate relations, because they constitute the most comprehensive set of agreements determining relations between two African neighbouring states, akin to the complex system of interstate relations governing European Union (EU) members.

Third, they represent the only example on our continent of the conclusion of an inter-state treaty by which two independent African states enter into a binding agreement to work together for mutual benefit, to ensure each develops as a viable state.

The agreements define such matters as:
• reciprocal security arrangements;
• reciprocal economic arrangements;
• the treatment of each other’s nationals;
• the demarcation of the common border and the resolution of border disputes;
• ensuring the political boundary between the two states does not hinder all-round human interaction across this border, making this a “soft border”;
• the guarantee of the rights of the nationals of each state temporarily or permanently resident on each other’s territory;
• a joint engagement of the international community by both states to request them to extend material support to both states, consistent with their objective to work together to ensure each other’s viability; and,
• the establishment of dispute-resolution mechanisms to peacefully settle all differences that may arise in the context of the implementation of these agreements.

The pioneering inclusive co-operation agreement signed in Addis Ababa by Presidents Omar al-Bashir and Salva Kiir Mayardit, respectively of Sudan and South Sudan, also confirmed the commitment of both states to implement all these agreements. The agreement sets a unique benchmark between two African sovereign states about how African neighbours should construct relations, to give concrete reality to the objectives shared by the peoples of our continent of African integration, unity, solidarity and mutually beneficial co-operation.

To the best of my knowledge, there is no similar African interstate treaty based not only on these fundamental principles, but also containing specific agreements which spell out in detail the agreed ways and means to give expression to these principles, which package will be ratified by the parliaments.

Certainly I know SA does not have any similar law-governed agreement which regulates its relations with any of its six immediate neighbours.

At the same time I know the agreement between South Sudan and Sudan sets exactly the kind of precedent Africa needs to take the giant step towards integration and unity.

This agreement gives substance to what our government has fought for over many years in the continuing debate within the AU, about how best to achieve the shared objective of African unity — whether through a top-down or a bottom-up process.

Immediately after the signing of the agreement, US President Barack Obama and the EU foreign policy head, Catherine Ashton, as well as the foreign ministers of the UK and Norway and UN secretary-general Ban Ki-moon, followed quickly by the UN Security Council and the multilateral Sudan-South Sudan Consultative Forum, warmly welcomed this historic outcome.

It is very shameful and embarrassing that, to the contrary, the bulk of our media essentially ignored the signing of the Sudan-South Sudan Co-operation Agreement, treating this immensely important African development virtually as a non-event.

This represents a failure by the media to inform its readers, listeners and viewers about a matter vital to Africa’s future.

Inevitably this will help to feed the perception that Africa’s future continues to be decided by forces outside our continent, thus giving substance to the charge that as Africans we are incapable of resolving our own problems.

It may well be that what the leaders and peoples of South Sudan and Sudan do to fashion their relations will play a decisive role as pathfinder or pioneer in terms of what we must do as Africans to achieve the historic objective of African unity — the result expected by the AU through the years during which it has done its best to assist the people of Sudan to overcome historic problems.